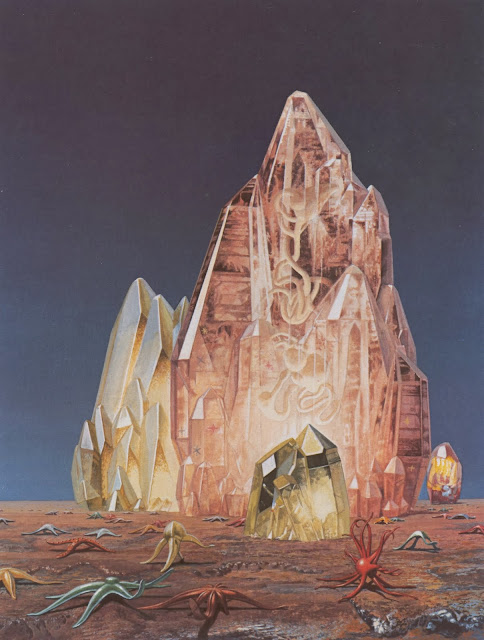 I learned some lessons from this. Killing zombies is pretty boring.

Party with some extra members.

Heroes helped the locals and deemed the stargate most urgent things to deal with and leave the mob and now independant redmen to their own devices. On a plateau mad by gods that keep it isolated. Surrounded by labs and science facilities and crawling with undead and other creatures. Climbed up side cliffs to get in to be attacked by creeping vines. Killed vines and tried bare rock face. Druid took some seeds. Then turned into huge ape form and caste a spell to grow wings. Flew party up and over the ruin. Saw an intact metal shuttered black office building with best landing. Is a black lab for Gentech Corp who help suppress bio agents loosed fairly often and also steal samples of alien contaminants for own research from government stargate.

Inside found biosuited lab techs and priest blasted many with his dead slaying powers. He also spoke to some. Party killed the undead corporate board, the branch managers, their receptionists and some secbots. On ground floor the AI was ordering them to surrender. The Druid told his chums he had experience with such threats from petty AI gods.

"I am only 5 years old you cant touch me"

He was grown by lizard men in a bottle only 5 years ago so lie detector knew he meant it.

AI was going to call cops and instead sent Psychbots from mental hospital which party had big fight with in doorways. Children Services robots offline trying to seize mutant children from the wastes. Finally got into the AI room and Quatro began to be friendly and helpful. Questioned about other possible locations. Got into underground carpark and found tunnels. Went into hospital underground carpark and found full of bodybags. Which of course awakened.  Rogue got in ambulance and put in riotmode auto pilot and drove in circles around 3 floors running down about 30 zombies. Found lots of programmable nanobots and took to Quatro who turned into antizombification nanites. They stop undead making alien necrovirus.

I got a bit poopy here and greyed out and other player took over a bit.From days of DMing or lack of sleep. Player took over and got everyone to do a vampires dark age humans characters for us to start for new game in club. I rested up a bit and felt better so ran some solo stuff for an hour for thief player while he was waiting for a train. He explored basement and killed a few looters including tailing a Dominator Mutant Psion with slave goatman and redman. Killed them all but tricky and some bad luck. Helped a feeble ancient chased by a greaser roosterman in leather with a carbine who hates all humans. Killed him too in a sword fight. Helped ancient man in bubble helm suit to take wife's pod to join rest of party for next session.Woman is sick and only modern Psychonian magic might saver her. Then she can get to mutate like everybody else and have her memory erased by the gods.

On one note whole party now have smartphones in a network. Some talk of using to call gods. Who has the gods personal phone numbers?

Next game will have to dissuade more from exploring everything and killing every zombie. Never in much danger. I plan on setting up miniatures and terrain for playing party dash to the stargate and observatory through zombies and ghouls. Undecided where gate goes (Carcosa?). Apparently necromancers come from other lands to the Charnel corpse filled swamps to raise undead armies. Some have entered the stargate never to return. Druid has been twanging his necro-guitar of late and another character now wants to play the drums. I'm liking this development.

One player asked about what should party be doing more of?  As gold pretty useless, as is land holdings, and social status all not important what needs doing. Probably like old Dr Who where a failed utopia needs saving. Fixing hexes local problems and moving on is how you get to level up. Also coming to deal with gods more for long term benefits. They provide best shot at getting a base of some kind in a orbital they can use to explore the planet. Gods use heroes to clean up messes. If they fail they terraform the hexes with people still in them. I can see them being like heralds of Galactus. Land in hex with a countdown to save from gods wrath. I also considered that Psychon is actually inside a Dysons Sphere but Im not sold on this or telling players but it could be an alt version idea that someone might run with.

New players helping to break my house rules. I'm gonna have a EMO rules consult day with some players soon. To help iron out rules and develop the next version for new year of play. More mid level players and casters now finding some new bugs. In my regular DnD game I agreed with players flame strike would be now be a d4 per level damage. Then hit the party with 4 in next battle. That gamelog coming soon.
Posted by Konsumterra at Wednesday, November 20, 2013