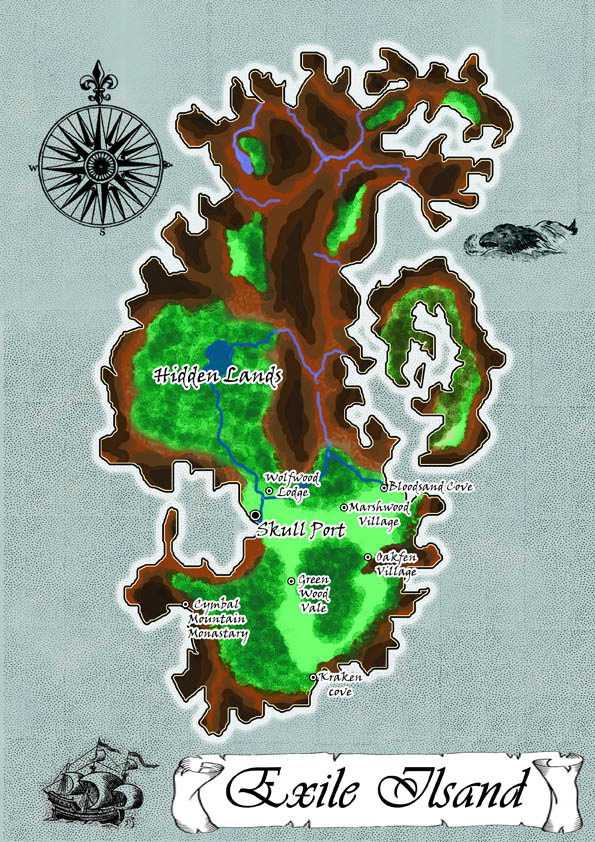 So to keep track they started at Kraken cove, killed the ogre at Green Wood Vale (pop 50) and got a house, went around the forest and currently around the village of Oakfen (pop 500)

.Mostly recap from first post:
So Exile Island or X-Isle is where the fleeing people go. Most have never heard of it. In fact it is where all the empires pirates under letter of marque are based. A filthy anarchist pirate city populated by the scum of the empire (Lv4-6). Crawling with Empire spies and worse. Really the Island is a fragment of the previous world where several pantheons of gods were slaughtered and a universe was destroyed. Ruins of previous Empire occupation have beneath them ruins from the Elder age when Inhuman Monsters ruled. Strange cults and non human races still dwell here. Enchanted forests hide fabulous creatures. The unexplored mountains hide lost tribes, cave men, hidden kingdoms perhaps. The Wild unexplored north coasts have Vikings settlements, trolls and Dwarves. A large Island off the east coast has a giant Volcano leading to the underworld and Tiamat's Lair (Lv 8-12). It maintains a prehistoric ecosystem and the last strongholds of the elder races.

Most of the Island is surrounded by impassable rock walls and difficult to navigate reefs. Only a few ways to land are possible. Foul Skullport is one safe landing but your well being there is unlikely. Blood Beach - the island whalers and sealers town, attracting sharks and making giant stinking clouds from their animal rendering cauldrons. You can land here but actually its worse than skull port. Home to almost all men of the worst types, rejected from ship crews for being too unstable. The north coast has some secret Viking landings which their longships can safley use but empire war galleys cant. The south coast has ruined lighthouses all along the coast. Fishing villagers of desperate inbred cultists dot the south coast.

Extra!
The forest above Marshwood village is an evil sentient swamp, where a chaos god bled into the earth. Above that is a stretch of mountains where old way tribes and goblinoids and orcs battle for supremacy. Ruins abound too. The hidden lands are a giant Sylvian woodland where elves, goblins, werewolves and unicorns play. Woolfwood Lodge is one of the most famous hunter fraternities in the world and nobles from across the world come here for the deadliest game. Wizards come here looking for exotic ingredients, and even villagers poke around for healing unicorn truffles (aka poop). A very dangerous borderland where humans are not welcome.
Posted by Konsumterra at Thursday, September 06, 2012