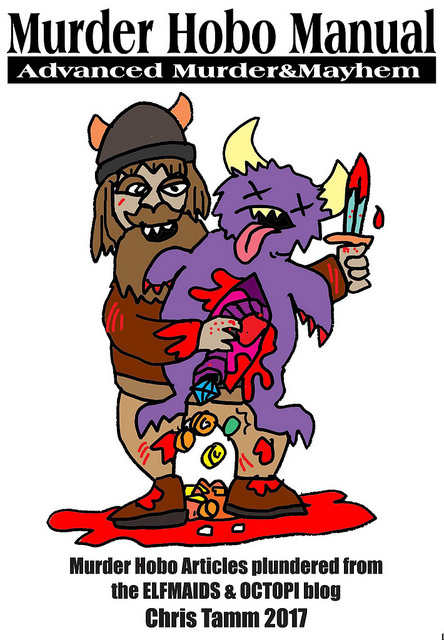 This is a work in progress I might end up listing lots of the non tagged blog posts here...

What is Elfmaids & Octopi?
My homebrew DnD rules based on BX dnd Cyclopedia, late 1st Ed AD&D and a bit of 3rd ed. I never read anything 3rd ed but played Temple of Elemental evil PC game (on gog.com) every year and it and players wanting to score dnd nerd cred since nerds became cool about 6 years ago. I wrote rules from memory without reference while sick for months. Was stunningly accurate.

The main features of EMO rules are:
Whats with old games?
I don't like anything because it is new or made in a certain place or by a company
I used up my memory slots for systems in 1983
If it aint broke dont fix it
I find older games simpler
CoC7 DnD5 sorry but more complex by far than OSR versions
Loads of Free and cheap content
OSR community creativity (even some of the jerks)

Can I use EMO stuff in my work?
If it is for own use fine obviously
I'm happy to let ppl use a single table or something in a zine or free product
-Just ask and if I can get a PDF at least
-acknowledge me and put a link to my blog
-open to discuss using more
Im happy to collab on bigger things and make d100 tables or maps for ppl
-price and terms dependent on product distribution and total print numbers
-open to negotiation

Ambitious Game Stuff
Actually I naively hoped a publisher might pick me up....sniff
Planet Psychon Kickstarter for 2019 then Xor
Id like to publish a fantasy and space version of EMO too
Go to Gencon and more cons

Do I actually understand English?
Many comment on my terrible grammar and spelling (she was a nice old lady)
I am dyslexic and terrible at editing my work
Id like to KS one day to make some stuff propperfied with heaps gooder spelling
I don't feel I cant sell anything till this happens
Australians often mix American and UK spelling and have our own spelling
-Australian spell checkers are mostly shit and are American really which sucks
Right now my computer has a broken e key
My new one disliked my modem
One plus is I devour older versions of English easily as a reader
Occasionally even friends make comments on my problems that just makes me stop writing
I have had some good fan edits but check with me how to help
Marked up PDFs best for me

Other Setbacks
Trauma, health and poverty get in the way sometimes
2019 should be better

BX Style DnD
I run original and several retro clones. I have my own EMO Elmaids and Octopi house rule clone ive used since 2012. It is basically like BX or cyclopedia plus some late ADnD (post OA and DSG) plus a few things from later eds I like. Im currently writing it up for use with a few other changes in hopefully a basick book and a fully sick book. Will be metric too sorry.

GAMMAWORLD
2nd Ed - one of the prettiest games and best designed box sets ever. I dont get to play enough but have developed several settings Beaver Island and Broken Hill Gamma OZ. Dont get to do this enough.

RUNEQUEST/BRP/CTHULHU
Have not seen new ed yet. Mostly played RQ2 and RQ3. Loved it for historic settings and often mashed with BRP and CoC for historic Babylon, Vikings and Rome. Also ran as SF game for years. Have my Murder highway car combat cyberpunk apocalypse game influenced by Kim Newman, Mad Max and Autoduel. I mostly play Call of Cthulhu 2nd edition but have 7th and will give it a go. New RQ looks pretty but im kinda not really into new editions of anything. Have a Dark Forces setting with elements of Cthulhu, Superworld and Espionage inspired by Zenith and Laundy files.

TSR Marvel Superheroes
I van a game for over twenty years that started as champions then went to superworld then Marvel. So mostly did not use marvel universe.