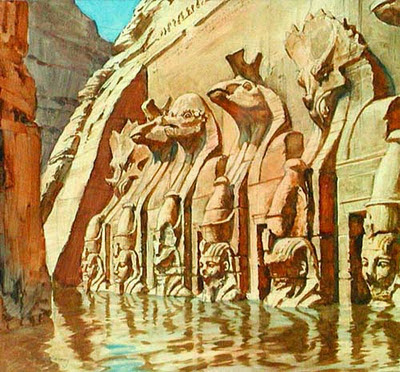 Druid returned with the Eldren and their new cat friends from the ship graveyards near ruined catmen city. Found a new ally a rogue emerald skinned assassin with magenta hair and a 6 foot long tongue he could swing from. Was a escaped clone of a distant city guildmaster. Druid had to admit he was only 5 having been decanted by serpent men in a lab.  Found rest of party and healed the morlock and the group planned next action. Debated between killing the caretaker of the subworld apartment complex or try to enter the core of the macrobe infestation and let the Eldren use his elder thing mind stealing medallion to learn their weakness.

So to the subworlds and into the apartments built by humans and colonised by cat folk. Elevator died second level. Saw no life couldn't fix lift. Next lift went one level died. Fixed and then died next level. Next lift made it to penthouse. Caretaker AI boomed threats and three repaired clawed toothed robots drove out into the indoor forested elevator landing. The Druid flattered the AI while the assassin and eldren sneaked past robots into the caretakers suite. Skulked inside and eldren tried to mess up the AI robot controls the assassin crawled in a access hatch inside the mainframe. AI grew alarmed and sent robots into control room but were blocked by hawkman who slew one robot. Druid, his mutant wolf and morlock bashed several from behind. Hawkman leaped over dead robot to kill another and all robots went down fast. While assassin pulled out memory modules making AI dumber, the Eldren messed up controls and druid summoned a bug swarm from his sleeves into the AI. Then he created rain which the AI counted with freon gas which he hoped would kill his defilers. Whole party in gas masks and winter clothes easily finished off AI. Assassin pocketed all the brain modules.

While complex died Druid released fungi spores and party convinced cat folk youth gangs on lower levels to leave the complex. They did reluctantly but the cat village welcomed the youths and praised the heroes. Next party marched into the macrobe infestation zone past drooling mounds, quivering cilia and rugose towers of phlegm. Finally they heard a battle between one of the ancient catmen bronze golems blasting its way through the macrobe land. They followed part way as it was a good distraction and headed for the core. Found a eye macrobe which eldren used his intellect absorbing ring to add its consciousness to his own. Barely resisting its power and the ego of the whole macrobe colony weighing on him he eventually pushed it into place with the poor goblin lad he drained earlier. Now he was aware of the colony, its health, its goals and fears. Party went deeper into the alien landscape.

A great biotower of macrobe flesh with psionic eye macrobes attached, surrounded by ball macrobes and three dread sword macrobes they had heard of. These resembled sea slugs that flew in the air and had force blades on their antenna. Party began shooting javelins and flintlocks at approaching deadly spore spheres. Assassin in his shielded suit sneaked around and started to climb the tower unseen, while the eldren blasted the eyes with sorcerous fire bolts.  Several catfolk companions were paralysed while most of the ball macrobes damaged. Hawk climbed onto the druid while he transformed into his 30 foot ape shape and both were attacked by deadly orbs. Sword macrobes struck hard scaring most of the party and injuring the best warriors. Several scorched eyes used their paralyzing mindbolts but then assasin killed one and the druid ape used his plant killing breath weapon to kill rest. All macrobes and the eldren felt them die and spasmed. All the sword macrobes turned on the assasin who had fallen into a heap of mucous where the tower had rotted from the druids breath. He was knocked out bleeding so druid shrunk to normal to deliver first aid. Macrobes were finished off and the great tower was felled. Party burned it and druid breathed again turning remains to mush. Whole zone quivered and fell to chaos.

Returned to cat village and got cats to attack, destroying a whole sub hex or the horrors with fire. Next morning they had cleaned up to the rivers edge. Heroes went to visit the sorcerer in his pleasure dome convincing him to aid the cause and help unite peoples. He followed party with his best students and they went by wizard and the warrior schools taking the three great masters to the citadel assembly. Party were allowed to speak to council. Eldren convinced them to unite with catmen. Druid got them to give voting rights to the warriors. Hawk convinced them to make him warlord in battle vs macrobes and asked for a fancy hat and badge. Assassin requested they release all prisoners from dungeon to aid in great crusade. He then claimed he should be guildmaster and local gang said get out or die.

So the united people destroyed the macrobes and the last sad tower tried to eject spores but the gods sent a ionized plasma cloud aurora to disintegrate them. All peoples united and equal in a new kingdom and all celebrated the end of the alien swarm. Druid received dream from Gaia that it was time to move. Party went south and crossed a huge wall of ice before a gathering swarm of cyan neathandrals and yeti could get them by riding the druid in his giant ape form.

New land was a warmer jungle of ivory and emerald with creamy white river flowing through. Saw a colossal structure and headed there. Heard chanting and bleating and crept ahead to see scarlet men led in religious service led by jet black goatmen. Party hailed them and goat men hushed their human flock and leader bleated greetings. Explained they should worship mighty Yar Gam who teaches humans how to atone for sin of building stargate. Said the red men would house them in their bunker till Yargam would see them. Told that the gate and the ruined city surrounding it was tabu and guarded by metal demons and the dead red men sinners of past. The gate supposed to take humans to heaven but released hell instead. Party followed the meek red folk to ancient bronze vault doors to their bunker. On way killed some zombies and ghouls. Also heard of the savage grey aliens who lived in trees and attacked men and beasts to chew off faces. Heroes intrigued entered the dank corroded bunker....

I actually told new player to reroll character as was too good. Not seen one that good in 2 years of this character gen system - sorry redo. Came back more manageable with an 8 even. Am I a bastard DM? Most characters have two pluses this had every stat 15-18 - as many pluses as rest of party put together.
Posted by Konsumterra at Monday, November 11, 2013