Mythic Iceland: BRP at its best for upcoming Viking Games

I have spoken of my disapointment of Chaosium of late. Once I would get anything from them till Rogue Mistress (why not do ship from sailor on seas of fate?) and Orient Express (too clive barker, too 80s cheap teen gore, too much mythology). This product lifts the bar and is simply one of their best non cthulhu products i have seen them do. I plan to run a Viking Cthulhu game soon and this will be a start. Warlords of Alexander probably one of best BRP historical settings but fan made and comparable to Iceland in detail. I have always liked the RQ3 box set of Vikings but i think this product superior. 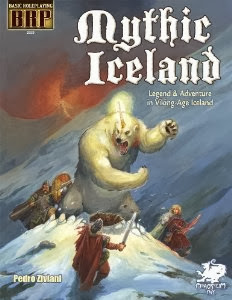 I have whinged about Chaosium font size and layout and professionalism of late too but this product is beautiful. The map is outstanding and fonts are fine. It feels very substantial and good value. Divine magic section is great. Rune magic I dont get yet is intriguing as is the chapter on using for Cthulhu. As a Dark age supplement it is better than the Dark ages book. Art all fine but did see a pixelated graphic as a few cthulhu items have had of late. I would rate very highly as a BRP or as a Cthulhu sourcebook, probably 8.5/10. Probably best historical gamer sourcebook since the history craze of early 90s. More like this please. Makes me wanna get all the roman stuff now and start writing a Babylon book for BRP.

I plan to use with elements of RQ3 vikings, Cthulhu Dark Ages, The Abbey, Caligo Accendum, The Ravenar Sagas, Spirits and Dreams of Viking Age. Will get Mongoose viking book for RQ as a PDF as only one dollar. Have cache of scandanavian studies texts and another DM in my club running champions vikings so will be a very viking new year. My 1490 Darklands game had about 9 players at one point which was pretty popular, hope this works well. Im playing in a vampire dark ages at moment too which im enjoying more than any previous game of the world of darkness.
Posted by Konsumterra at Friday, November 15, 2013