Gamelog: End of the Giant War 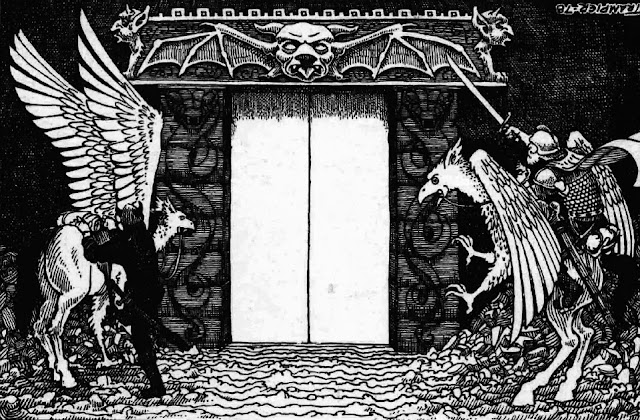 Latest gme of dungeons and dragons and accountancy. So the mighty giant war veterans having burned the hall of the hill giants and sending their chieftain  packing had destroyed the frost giant leaders too. Now the heroes sick of plowing into monsters like fat boys on a ham would take a different tack. They raised an army.

Party didnt want to spend 4 weeks here. Dungeons and dragons and accounting. I may acellerate game and get to 20th lv before they trash campagn world. Dont care about dark elves, off to monster Isand to fight t-rexes next and not Gygaxian hordes.

Emy sent word via her birds and linden via his bards that the great heroes were to destroy the fire giants once and for all before the next moon. Zorg and Milknog scryed with viewing ponds and wizard eyes the base layout. Druid spells sensed the earths secrets. The spied on the monster armies treasure, the king and his especially horrible wife and the many ettins, troll, giants and gnolls inside.

The heroes called on many friends but said no to demonic help from Emy offering to experiment with demon lords. She had also gained a ring of 3 wishes and increased her CHA so the Elf King might like her more. Then she conjured a force of skeletons and unleashed her beasts of war.

Milknog spoke to the magical sylvan folk of his valley and his gnome in laws offered help too.

Viking pal from time party were all unicorns returned now a mighty young lord as strong as a troll with veteran heavy troops sure to surprise giant. He was a mighty general and negotiator by force.

Heroes revealed only scruffy human trops hid rest in fog. Linded and the Viking lord rode out an met giants envoys. Told giants they were all going to die if they didnt surrender, destroy evil altar and get rid of dark elves. Giants laughed and linden insulted several. A young giant drew his sword against wishes of elders and viking hero cut them down and both he and linden galloped away on horses. Giants chased them and heavy infantry moved in. Bards enhanced the archers and rained hell on giants who were all lain. While that happened Milknog, Zorg and followers teleported into the giants dungeon, killed the giant heroes there and freed prisoners including a titan. All charged out and killed an ettin who got in their way. Ran back to army and more of force including air superiority came out. Giant Army came out and king was prepared to talk.

The viking lord told them giants must wear fealty, hand over all look, abandon evil cult and dark elves and get monthly inspections from the allies. Whatever the outcome the giant lords would be die first. While giants talked Sneaky Pete with a ring of invisibility and his voice throwing skills stirred up the giant dark elf debate resulting in a giant killing a dark elf. Dark elves slinked off looking evilly at the allied leaders. Giant agreed to end war, abandon claims to human lands at the heroes army, give six chests of treasure as war damages and to let party destroy altar. Druid collapsed the temple casting the altar into lava and destroying cult shrine and collapsing dark elf tunnels forever.

Unknown if truce works but powers of the Island realize party kingdom is no longer a joke and is now able to raise armies and win battles.

Players found tedious accounting of high level play a bit sad but we are determined to hit 20th and become godlings so we never have to bother again. Well for a few decades. I hope setting survives. Considered hunting dark elves but cant be bothered. Off to monster Island to fight dinosaurs, primordial race survivors and enter hell instead. Im willing to hothouse party to speed up this experience then go back to low level play. Or maybe Runequest.

Loving the Tramp art in original prints of G series rather than version i had. Image I picked here is great and suited my party well.
Posted by Konsumterra at Friday, November 08, 2013