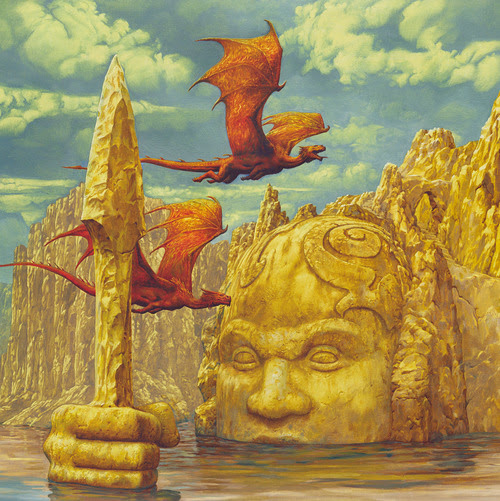 Party rested in Citadel of Karthang and Eldren friend appeared from teleportation platform to rejoin them. Cowardly green men had no prists but their enemies the Indigo Catmen did. So party trekked off to find them as two heroes had been drained by wraiths. Avoided ancient bronze catman golem and visited warriors of Xull. Met some zombies they destroyed slow moving monsters who had not much hope. Green men warriors on shore abusing and taunting some warriors of Xull over river and keen to return home to citadel to boast of battle. Party not impressed by the skirmishers definition of a battle. Druid turned into his 30 foot punk kong ape form and pulled down a tree to use as a probe in the river. Probed the muddy river shallows and swam over with party. A giant crab chsed him but he climbed up opposite shore and taunted beast with a tree. When purple crab grabbed tree and tried to chew, he flipped it ashore and parky killed it. I let the morlock player have the table for random flavours and he rolled up chilli crab!

Party had a BBQ (always time on Psychon to eat your enemies) and smell atracted the warriors of Xull the other greenskins were taunting. They had no idea citadel men taunting them. As they were not cat friends they were left to finish the crab and party marched on. Some green men skirmishers tried to ambush them but party saw them and scared them off with magic after taking all their stuff but leaving them a javelin each.

On edge of catfolk tribal sub-hex when blue one horned ogres charged them. Morlock took a savage beating but party struck back with swords and spells. Hawkman chased up tree by leader who tried to chop down but hawkman jumped on ogre and killed him. Morlocks pet Eloi was almost killed and Eldren began asking awkward questions about the Eloi. Morlock thought the Eldren tasted of old socks so had no interest in turning him into cattle. Ogres all killed but one they let run. The party started chopping up the delicious honey flavoured beasts when catmen appeared and the party made friends. The Eldren could even speak cat. Hawkman tried to be chummy but his feather twitching only exited cat men the wrong way. More cat men came with women and children to chop up ogres and take to village firepit. Druid dreamed up recipes with yellow caramel goblins and blue ogre fat.

Had a great party and all slept in giant wooden communal hut. Druid curled up with kittens and others took catwomen lovers. Their tongues were rough but cat women liked men who they could have non painful sex with. Eldren took two as followers and hawkman took another. Morlock determined cat folk taste of rose. Spoke to holy ones and leaders about fixing local problems and they healed adventurers who had been wight struck. Cat men had abandoned tech when seen damaged it did and party came to prefer the cats to the green men. Hope to unite all against Macrobe forest ecology. Druid theorized weaponizing undead wights and shooting them into macrobe controlled areas. Determined to visit ruins of cat men steam era city and the Sorcery cult. They learned to sorceror claims to teach but really he just picks naturals and grooms them. Non gifted become drug addled slaves.

Party entered the ruins near cat men lands. A cross between a Industrial revolution mechanised wasteland and Ankhor Wat. Huge crumbling towers, factories, slums, over grown with yellow ferns and vines with cat men statues scattered about. Catmen zombies came from a factory and party living catfolk refused to damage ancestors, begging party to kill and burn them. Party complied and fumes of rotten rose filled air. Opened some sheds and found factories (one making desk toys), a ruined hopital, artificial steampunk limb factory with hospital and a giant smelter. Heard some ratmen which cats got exited by tasty treats. Druid told them to hide as he spoke rat. Party hoped they were beer tasting ones but these were onion flavoured and the cat men described slowly frying them and deep frying tails that would curl into crispy delicious rings.