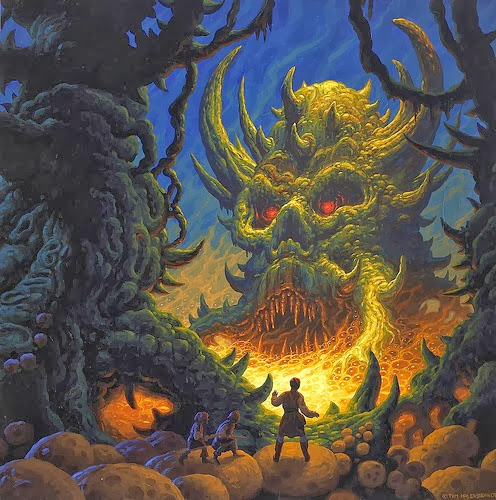 So party stayed with redmen in their power deficient bunker eating recycled food and hearing of the demonic wannabe goatmens domination. Druid repaired all the gardens and hydroponics and used his rock shaping and tree moving magic to create defences for the tribe. Hawk trained some in spear phalanx while druid taught some to be druidic initiates. Druid told them they are not to blame for ancestors and explained that the goatmen are evil charlatans. Hawk saw a shifty man sneak out via a forgotten tunnel and try to warn goatmen. Hawk nabbed him and dragged back to bunker where druid turned him into a egg laying monster the villagers put in a pit. Apparently the eggs of this endangered beast were alcoholic. Hawk was made a deputy and people warmed to him more even though a beastman.

Eventually goatmen demon knights came with a great goat man Asteroth on a palanquin. They came to collect slaves and tribute and were displeased with news of changes. Druid told them to behave as he was a mighty magician. Asteroth was about to order attack when shadowy goatman mobster whispered something and they backed down. Invited Druid and Hawk back as his arguments about red men requiring punishment for ancestors building stargate were not working anymore. Yar-Gam he promised would answer all.

So Hawk and Druid followed goatmen home and Druid to be a jerk summoned monsters every crossing so giant snapping turtles attacked. Eel swarm and extra turtles attacked anyhow and all up about six goatmen died carrying tribute home. Saw some savage feral grey aliens in trees to. Hawk and Druid put in hut for night and given drugged water. Druid purified it and the made big deal about yummy refreshing water. Morning brought in to meet Yar gam with Asteroth, Belial, 4 elite bodyguards and 20 common goatmen with glaives and demonic sigils painted on their heads. The great goat lords had Orcus like skull maces and Yargam had 3 horns.

Druid and Yargam argued a while and tried to persuade heroes to leave. Goatmen supposed demonic patrons and powers failed to detect as magical. Eventually Hawk just blurted out they were a sham and their faith was a load of crap. Yar-Gam waved his guard to kill them. Druid threw stick to snakes in path and weakened wave of goat men. Hawk speared a mobster adviser and Sir fangsalot the red wolf and Hawk's catgirl killed some injured mooks. Party took a few scratches. The Druid monstered out into his 30ft tall beast form. Hawk and the followers killed a few more and elite guard charged. Druid summoned a storm while snakes slowed goat advance and the others cut down more goatmen. Now worried Yar Gam sent his bloated offsider demon wannabees into battle. Druid now started call lightning and fried the mobster adviser. Party very resilient and most of original guards down. Asteroth blew a horn summoning more guards while lightning struck Yar-am who entered the fray. Hawk and catgirl fought the 4 elite guard and Belial got a good blow on Hawk.

As more goatmen came upstairs snakes slowed them and Druid shaped stone as clay with his giant hands collapsing the stairwell entrance and trapping goatmen outside. Hawk badly wounded Belial and held the elites in check. Druid came to melee and cast his gorgon breathe on bosses and temporarily stoned Asteroth. Heroes downed the elites and Belial but hawk fell. His catgirl leaped  on him to stop his bleeding and druid finished Yar-Gam with a stomp. Elite wounded guard fled and snakes and lightning ceased. Before Asteroth was unstoned the Druid with his stoneshape spell removed Asteroths organs over several rounds. Asteroth turned back to flesh and was surprised to see his beating heat and intestines spilled on floor then died. Hawk saved and conscious while the Druid in human form as better to do first aid. Opened a door in the temple dome with shape stone and showed the unconscious leader Yar-Gam to the crestfalled goatmen horde. Hawk cut off Yar-Gams head and kicked his corpse down stairs. Goatmen flee, their sham religion destroyed.

Back with red men in bunker celebrating and Druid did his best to bless maidens with his meat scepter of the goddess. All partied all night. In morning goatman mob sent single envoy offering Druid dominion of bunker and a bag of platinum. He explained he didnt own anybody and we all belong to goddess and the planet. Envoy made it clear the mob tolerated Yar Gam and offered Druid  similar arrangement which he rejected. Finally envoy said to visit mob boss anytime in gang mansion, but dont bother dealing with goat commoners.

Party happy to wait then kill the mobsters. After there is the stargate and ruined city to explore.