Overlands in the Sky Part 3: Wanderers 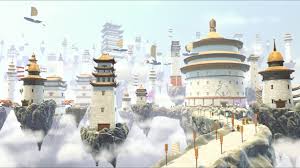 So cloudland turns out to be more fun than i thought. I get to mash up lots of giants, faerie and any planar stuff I want without the overwhelming absurdity of attacking an entire universe. I'm also liking the possibility of players colonising a cloud. As everyone you meet in the skyrealm is not a monster here are some strange folk that might help or hinder your adventures. I guess Im getting more tolerant of flying transports but not to be common in the lower lands. The gods and spirits actively hinder human flights to the upper realms with monsters, lightening or weather.

A options for this campaign might be to run it with zero level or children characters and minimize combat. Talking animals and other kinds of players or even faerie characters. Occasionally some bad boblins might need a few punches or a black hat shirtless gnome needs a beating. Perhaps reincarnate a party as treefolk or cloudland folk after a TPK.

d10 Cloud To Cloud Travel
1 Ferryman on a cloud raft
2 Sailor with a small boat will take travelers
3 Portal or teleporter pad to a preset location
4 Ropes use when islands pass for a limited time
5 Balloon or airship, dangerous but often luxurious
6 Flying mounts often for hire like griffons
7 Hitch a ride on colossus flying beast like a butterfly or bird
8 Ornithopter in shape of a winged animal with mechanical wings
9 Gliding, large kites, parachutes or other uncertain devices
10 Experimental flying machine mostly untested