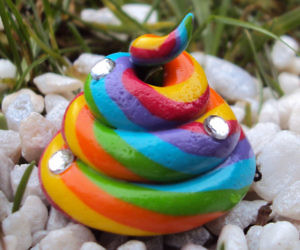 Firstly I apologise for lowering the tone of all gaming forever. I was accused of this by a TSR pioneer when I did a post on dungeon toilets. Greg mentioned magic poop and I realised its just the kind of grimy unclean content I need. Now there will be magic poop shops in the city, murder hobos will collect monster turds. Adventurers will find turds, taste them using their Gong Lore and evaluate the profitability of the dung. Now poor DMs will have to deal with adventurers investigating every heap of dung. Sorry again. Blame Greg.

In my game unicorn poop heals a d4 damage. So when party turned into unicorns by the king of elfland they got through various challenges after describing their unicorn forms, after they all took dumps and rolled in each others turds. This almost never happens in most of my games. Peasants sneak into the elf wood to gather unicorn turds, a right claimed by nobility. Wizards will study scatalogical tomes and copramancers will use arcane turd secrets.

Amendment - look out for fake poop dealers and it might take sniff taste and texture tests to get real valuable monster poop not just faux magic poop. I wonder if wizard poop magic?