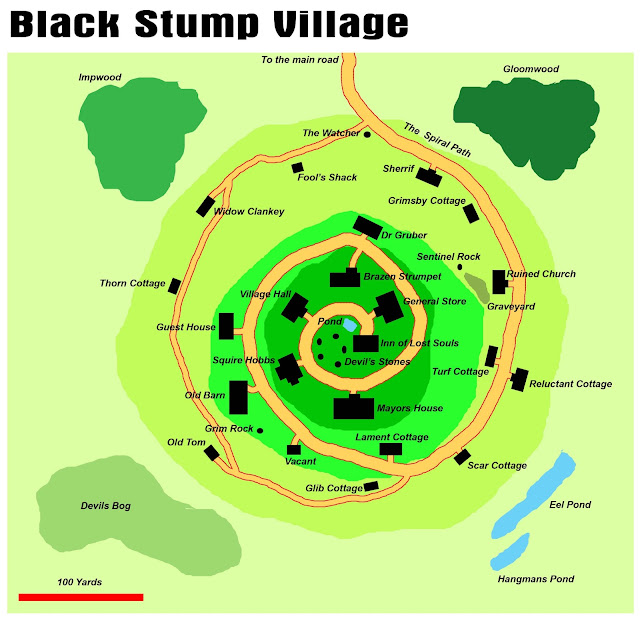 So this is where my village stuff intersects will my hell stuff. Will do some murder hobo shanty towns and stockades to plant near any dungeons too, possibly in stages of evolution so one can be built outside a dungeon while you are inside and get bigger every visit. Has been on my to do list a few years. My copying google maps in various settings has been good.

Black Stump Village
This is not really just some innocent village you stumble across. It is a village of the damned planted by hell to trap the unwary and the road connecting it to the common path will just appear one day. Of course travellers wont realise nobody has seen the road before. A mile away you can see a hill with some buildings and some smoke with some copses of trees in front of it. Their seems to be winding trail around the hill to the top.

The Winding Path is a trail to hell. Once you cross the trees you cannot head back. You are trapped in hell already it just looks nice for the moment. If you head back the road simply seems to go on forever towards the way you came. When you head back to the hill even after hours of marching you instantly pass the threshold of the village. The winding path is in fact the road through all the seven hells. The only way to get off it is to go through all the hells and escape from the final layer after passing the challenges of each gate in hell between layers.  Like snakes and ladders sometimes hell sends you back to the start and you might find Blackstump slightly more tainted than last visit. Eventually the village will be a diabolic parody of village life full of fornicating devils, witches and cultists.

Local Area
Impwood - So called because Imps really do live here, The squirrels, rabbits, toads, ravens, fox, tiny deer or goats - all imps. The wood is oddly quiet and devoid of normal life. Occasionally you find some human remains of someone who gave up trying to escape. Or the ritually murdered remains of a animal dissected and ritual nailed to a tree. The villagers think a witch is here.
Gloomwood - this forest has a melancholic mood. People come here to be alone, cry or commit suicide or just get firewood. Occasionally you can catch some game here.
The Devils Bog - a foul smelling bog villagers come to collect peat from. All too often they find some ancient human remains and nobody goes there at night.
Hangman's Pond - apparently the village hangman drowned himself here years ago. People don.t like to fish here and say you can hear the hangman sobbing.
Eel pond - a popular place to fish and get water. Occasionally a huge eel attacks someone or a bunch of eels kill a sheep trying to pass through the shallows