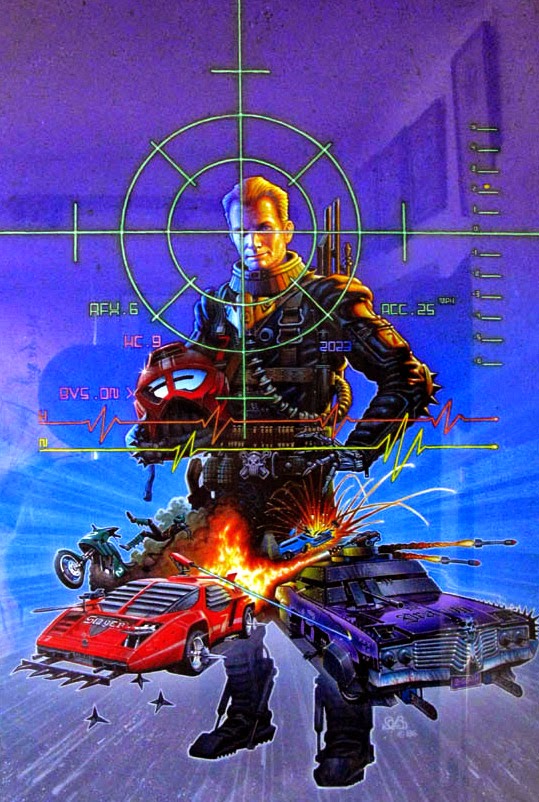 So start session turned into a character gen session with trial combat. Ran mostly using gurps autoduel for cost and some setting info, still cant find my prit copy which is one of my favorite gamer product ever. Cover art is awesome of 1st edition. Also have other one of favorite products: Death Valley Free Prison adventure for excellent cyberworld setting with lots of mad max punk cars, weapons and armour. It is a cross between road warrior and escape from new york. Have the Dark Future rulebook and a 4 pg art booklet ad from Dragon.

A little bit of Dark Conspiracy too.

Years of cyberpunk running and I still have it. Able to improvise lots of tech on fly. Will play next sun arvo before vikings then wil alternate with several other cyber punk gms for cyberpunk sunday. I might try a few sessions of Cthulhu Metropolis too later.

A few typos on character sheet to fix.

Original plan was to be mustered out cyborg troops but players ended up with some other choices. All that free cyberwear and biowear is not free. It was all made by bastards and is worth hundreds of thousands of dollars. The also have SAN losses.

Cyborg nun a agent of the Vatican, returned to Australia to report on weird wasteland phenomena. Has a data jack a cyber eye and boosted reflexes, mucleware and dermal armour. Drives a refitted Alpha Romeo with pop up machine gun in linked fuel car. Prefers a sub machine pistol up close.

A Japanese "secretarial working visa" (sex worker?). Actually a Gentech agent, raised in a psionics research centre and trained by corporate ninja. She has some biological mods including low light vision, poison resistant glands, and boosted dex. Can read surface thoughts. Has a scan proof silent recoiless low cal machine pistol. Most ammo will scan. A virbo mono katana and a kowasaki ninja bike that runs on fuel. Ha lots of mini grenades and vibro shuriken. On a mission from Gentech to look for other corporate agents or black labs or operations in wasteland.

A ex military vet with cyber arm with a jackhammer punch, 9mm pistol, cyber eye, data jack dermal armour and a partial reconstruction including spine and shoulders. Has lots of big guns including a grenade launcher. Wears full armoured duster coat with inserts and flack armour. Has a Nissan 4x4 reconditioned with a MG. Has been mustered out and experience in the zone has been deleted. Well just a few nightmares and a free psych session once a year.

A ex military pilot with a major reconstruction, cyber arms, legs, eye, heavy dermal armour. Legs contain rockets for limited flight (more like a jump), magnetic hand clamps, a door and vehicle hacker deck. Drives a truck with drone rack including a flying scout drone with rockets, and a motorbike with a machine gun. Is seriously unstable SAN around 30 after all the implants. Has a ultralight stealth gyro copter. Truck has meatgrinder and biodiesel slurry microplant behind cab. Roadkill to fuel in 24 hours. Remembers nothing of own life, just flashes of burning in a ground attack jet crash and some bad feelings around choppers. So borged up police will have STAR force on standby when he is seen doing anything suspicious.

A wasteland mutant still to have mutation sorted and will get some kind of  feral buggy or bike.

First three in Sydney at Woli Creek gate near airport. Party at truckstop get a organ courier job for $5000 bucks to Bathurst only two hours away on peak conditions. Of course world a mess since map box updated. So left through various PC police control zones under martial law out past penthith through the mountains and into the wastelands beyond. Bathurst one a mecca of motorsports in Australia is now a fortified town surrounded by gangland turf.  Whoever wanted these organs was illegal and had reason to avoid using air travel. Mostly means illegal. Probably organ jackers. Transplants still 10% of cloning.

Into the dustbowl past ruined homes, rural town suburbs, and sand dunes till approach at Bathursth saw smoke ahead. Sent biker ahead and she saw with her bionic eye a turned over farmers food aid from red cross with some other wrecks. Saw some scavs in the rear or truck and a glint of a sniper lens.

Drove off road and bike got a rock somewhere and bike stopped. Left in the middle of nowhere she grabbed some stuff, put of stealth suit and moved up. Others moved up in 4x4 and alpha and had heard sniper and had location. Biker girl mad moved not very far feeling very vulnerable. Bullet hit armoured windscreen of 4x4 and driver felt bullet touch him with contempt.

The Alpha and 4x4 wasted the sniper with machine gun fire then two large feral battle buggies with light machine guns and two bikes came out of the smoke. Vet in 4x4 stood out of  sunroof and fired a grenade under a buggy destroying it. Alpha MG gun nun wasted gun crew on second buggy. One biker jumped on 4x4 and climbed around cab. Driver dropped the GL and fired his cyber arm pistol wasting the dude while slowing the truck down as it passed through smoke between hills through his jack. Ninja biker girl had made very little progress and now a bike came at her. Driver missed her with light machine pistol but she wasted him with barley a twitch from her stealth gun and went after the bike that skidded off to a halt.

Alpha wasted other buggy and into smoke plume where she saw trouble and slowed down. Wasted one feral with a MG then got out and held the other one up and locked him in her tiny trunk. 4x4 had a couple of riflemen fired at him from behind dunes and he used his grenade launcher to waste them with a grunt.

Looted a feral dirt bike. Some crappy guns. Lots of sacks of farmer famine food aid in truck that will make fuel in no time. On to Bathurst to collect pay and deliver hot organs.

Dark Future Sanity Shock 1d10+4 rounds if lose 5+ SAN and make Idea roll
1 Berserk charge into hand to hand or ram if in vehicle with any convenient target
2 Ammo Psycho, discharge as many shots as possible, if run out look for more ammo
3 Flee in terror even pointlessly in a corner till you injure self as fast as possible
4 Flashbacks of traumatic past or nightmares, religious visions or out of body experience.
5 Black out or feint unconscious, don't remember anything happening around
6 Freak out crawl into a ball as if problem might just go into a ball
7 Blow up the world! seek to ignite a fire or set off explosion or cause massive property damage
8 Seems fine now but inappropriate flip out later at loved one, authority figure, member of public
9 Stand uselessly d4 1=Laugh 2=cry 3=vomit 4=screaming (or pick most appropriate)
10 Self harm in most dramatic way possible like huge fall or explosions or skin self or suicide charge

Dark Future Insanity 20% SAN loss in one hit gets one of these
1 Death wish take unreasonable risks, like to smoke, drink, gamble and drive fast. Live for adrenaline
2 Drug abuse becomes obsessed with a substance and becomes dangerously unreliable
3 Weapons and killing are only things you truly care about. You horde weapons and long to use them
4 Time to beef up! You become obsessed with self modification, appearance, surgery and working out
5 Sex and looking hot takes away the pain. Unreliable, wasteful, vain, exhibits dangerous behavior
6 Paranoia! Somebody to blame, secretly plotting, mysterious agenda cant trust any one so be ready
7 Religion and magic and alternative healing will save you with crazy beliefs and unhealthy cults
8 Greed turns you on your fellow humans d4 1=money 2=food 3=power 4=true knowledge
9 Split personality with own agenda and manifestation. A friend, demon, childhood toy, dead lover
10 Prone to psychotic rage in times of stress, SAN checks to keep yourself together

Experimental drug therapy or chipped in therapy could be court ordered. Possibly vets have already had this. Many meds come in cigarette form or slap patches. A medic might order you to smoke this. You could use this table for other modern action war games too.

Every crew and gang has a crazy theme of course. My gang table for marvel handy too. Enjoying using my tablet for real road maps.

Probably will do next session at Bathurst Truck Stop for another assault mission and some secret black ops subplots for characters.
Posted by Konsumterra at Monday, May 26, 2014