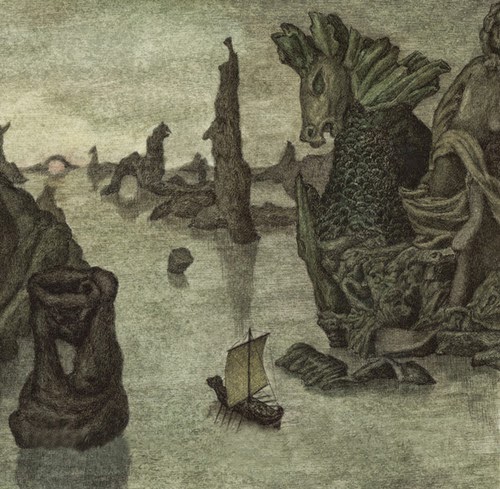 Business has been good for the Stonedale clan.

While Hrafn with wife and king in Norway the others went to plunder France. Returned with more slaves and wintered with new Danish comrades.

Briedr wife died in childbirth and the child with her. His cousin went to work finding him a new bride and he married the Earl of Red Sun Fjord's sister to avert trouble brewing from earls jealously over clan success. But at least his famous cow lived.

Thora now a fully accredited priestess of Freya and sanctified the ship Wavebiter as a holy place. Now able to teach spells, convert others to worship of Vanir and other feats.

Throa continued to enchant her iron mace and work on opening herself to more magic power. Almost died in childbirth with yet another daughter. Married off some of her stepsons. Looking after her adopted cultist children despite warnings they are tainted.

Johan increasingly unstable but devoted to sea god. Bringing his wife but being more protective.

Thorhadr jealously clutching the gold he stole from Mother Hydra despite warnings from cultists and Thora. Bringing his Christian thrall along.

Alrec has many children and adopted kids and one died sadly. He also working on developing more spiritual power, his greatest flaw as a leader. Bringing his 11 year old adopted son along.

Loon the Loki beserker keen to follow as party do things no others do.

So looking for magic islands to the north and clues for the castle of the great serpent/leviathan said to rise soon.

On a cold windy day saw a strange rocky dome on an island surrounded by birds. As got closer realised were buzzards not sea birds. Got through barrier or rough water and rocks skillfully and landed. Party with another Christian monk came ashore. Johan commanded his pet sealions to guard the boat and they seemed fearful of island. Went anti clockwise on thin stony beach around the dome and Thorhaddr found a skull. A bit later found a cave about 30 foot up cliff. Thorhaddr climbed and fell and Briedr saved him. Johan got up and dropped a line. Rest got up. Cave filled with human bones, crude petroglyphic drawings of men fleeing a bigger man and buzzard nests. Birds a bad omen thought Thora.

Throa used her rune mastery to perform a contact dead ritual. Carved the runes, filled with her blood and chanted.

Johan, Loon and Grim crept ahead with torch and entered a large stinking cave with sounds of snoring. Saw a massive figure moving as snoring stopped, Loon and Johan charged. Grim shot in leg and Johan hit same leg while loon Jumped on top hacking with axe in each hand. The troll reached for a rock to throw and Johan cut arm so he dropped it. Instead troll punched Loon who was hacking giants chest, smashing Loon in the leg and knocking the madman off.

Grim took careful slow again and Johan struck a final blow. Others came and Thora smashed the unconscious trolls leg and skull and skinned the beast. Found some whale, walrus and fish bones and feathers and a narrowing tunnel. Found a stony spiral stair like ones seen in Britain or Hyperborea but ancient and worn smooth. Climbed into huge cave with dark hidden corners and shrouded side caves. A huge rune covered stone table with strange carved jars was in chamber. Between Thora's priestly lore and Thorhadr's skaldic lore translated runes talking about the darkness before the world created.

Thorhadr climbed on table and looked in mortar and pestle at ground bone meal. A jar of animal eyeballs. A jar of fish. And finally jar of black liquid like the mass in the Temple of Tsathogua. He knew it was a shapeless spawn and he had spell to talk to it he had learnt from Hyperborean carvings.  From table he stood on could see a well of light from above and all went to see a cauldron bubbling beneath the shaft of light that served as a chimney.

Johan shuddered as he saw party shadows squirm. Briedr saw too. Thora used her second sight and could see living shadows surrounding them one was great and powerful. He tried to talk as others poked stinking wet pile of seaweed with drowned sailor bodies.

She tried to speak and shadowy form turned humanois and held out a hand. Knowing gods hungered for blood or souls or treasure she offered a magic cultist dagger and the shadow being formed a solid body making many in party twitch and bite their tongues. A eight foot tall hag with iron nails and jet black craggy skin, a hooked nose and a chin in tattered flapping robes of shadow. It took the dagger sniffing it and then sniffed party most wary of Throa and her rune iron mace but interested in the handsomest viking men and the christian monk. The hideous hag smiled at gift and asked why vikings here.

Explained they sleeked to stop the castle of the leviathan and any means to stop its rise. She gave them a date - first day of winter 899. Told them of the cults and relics that could help or hinder the rise of the castle in the sea. Told of star stones that could help. Where they asked. She cackled and asked for another favour, a virgin sacrifice. Given choice between Alrec's son and pious young monk was easy but had to convince youth was needed to stop leviathan and probably part of gods plan. He wrote a note to friends among other thrall monks of St Bartholomew and accepted fate and she clapped leg irons on him with a chain. She spread seal fat on bench and scratched in star positions and map for Johun.

Pleased with them and trade she offered a great boon to any who would be her lover and grant her another son. Alrec accepted and the two wen off and others heard terrible cries. She assumed form of attractive woman, a shadow and a had during the deed. His back was clawed but she cast a spell to make him hard to harm for 40 years. There was some debate that being a fey creature son might appear sooner than Alrec thought. Also realised troll they killed was one of her sons. She welcomed them to return to trade but they were keen to leave. Throa asked her to be quick to kill the monk but the Iron hag said his body would not last long. She gave them a rotten leg as gift to her son on way out.

The gang fled and rowed as hard as they could. Saw storm brew in distance over island.

Got closer and warmer air and sweet smells. Saw welcoming pretty humans greeting so landed boat. Welcomers asked faiths of each visitor and were pleased with answers except from last slave monk. They begged party to not let him land or gods offended could they perhaps kill him? Johan agreed to make him stay anchored off shore and would command seal to drag him out to sea if he somehow fell in water. Thora stayed on boat starving, sleep depriving the monk and tried to convert him. He resisted a long time and eventually caved in. For good measure she slept with him to ruin his vows. Wary the native watched him land and all was well.

Spent days on paradise of the vanir seagod. Johan very pleased and all invited to live on paradise till end of the world. As only 20 months away party declined but tempted. Alrec asked young son if he wanted to stay but he said he could not please Odin or Thor in e peace loving kindly place like this. People explained they once stopped the castle of the serpent by depositing their star stones on the island but heroes never returned and they had no relics left. Explained the crewmen cultists tainted by serpent and Throas adopted cult babies were not welcome long term here bu others welcome. Slept with many islanders and Johan's wife got pregnant. Thorhadr's gold curse was explained too that the sea demons would claim it back.

When realised fey time dilation at work they fled paradise and returned to Iceland to plan. As others went to hall for feast Thorhadr buried gold under his floor and went into his sweatlodge to speak to his darkspawn. It was hungry so he fed it rabbits and became bucket size. He spoke with the hyperborean spell and it taught him contact Tsathogua. He called the god and promised powers and explained gods were frauds who rob power from cultists while his magic offered infinite knowledge and power. Gave him visions of where to find spell books of Eibon in France and other relics. Then it warned him mutual enemies coming. He awakened from dream and went outside to see figures coming from sea. He called kinsmen and warrior came out to see deep ones landing. Everyone shuddered and afraid but Thorhadr snapped and tried to charge them. Breidr dogpiled him with Alrec and Throa ran to Thorhadr's hut. Asked his wife where gold was and she told her. Throa dug up gold and threw into sea and deepones departed.

Thora missed whole thing as she was in her lodge preying.

Travelled to Norway and assembled surviving monk thralls to council. They spoke of star stones used by wonder workers of Syria and elder secrets in books like ones vikings burned ten years ago like the Necronomicon. Several brushed up on Arabic from Arab trader in capitol and decided on Byzantium the next goal or Miklagard to vikings. Met Swede earl and went with him to Sweden with a side trek to holy sanctuaries of Upsala. Most of party adopted Initiate status to a chosen god and learnt some magic and made huge donations.

After courts of Sweden went through Russia to Novgorod the Kiev then through to black sea and on to Byzantium. Over the long trip met peoples of many lands and heard of China. Met Jewish traders, Mongols, Tartars, Bulgars, Slavs, Finns, Khazars, Syrian and many peoples, even learning a little language. Fended off some pirates then landed in most fabulous city in world.

Fully running like a mid level RQ3 Dark ages game now. Thought of Byzantium game for years so have resources ready. Get to seek magic books, cults, varangian guardsmen and more. I'm thinking a trip to city of Irem too.