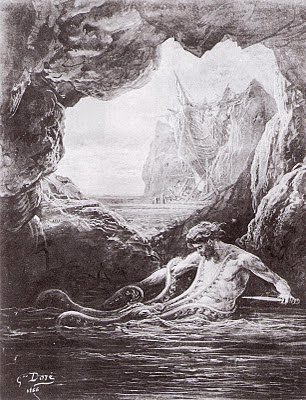 Have a new player Sal tonight who is mostly unfamiliar with pre 3rd ed dnd is interesting . His own game if a killer deathtrap dungeon where people die lots called Die With Honour. Has awesome collection of monster minis. He gives us dungeon map. Some people played  through 3 times over several years and play in con several times a year. It is in many ways a oldschool mega dungeon. We even get map to colour where character had been. 3.something edition.

Anyway as almost cancelled session ended up making character and Andz came over after all and we had a entertaining game as they finally visited my goblin mine zone in Devil Hill. Actually the peak is a Goblin city just with lots of empty places for fringe gangs and  murder hobos er cough I mean adventurer can attack.

Sal did worst roll i seen in years with a 9 a 10 and 11 as best tat so we cried abort. Started a new one as a sorcerer. Has a Imp. Also has own party of followers. A Elf, a Cleric and a Wizard. He leads them on adventures and kept hearing all the songs in adventurer pubs of Devil Hill. Also heard about the devil god imprisoned beneath story. Came to check out. On way met face shaping wizard (3rd time a player ha met. Boosted CHA more. Elf and Priest in armour and sorcerer wears +4 leather and a magic ring. Uses a shortsword and shortbow.

Asper Cumberbitch the CE pirate halfling and slum lord was looking for his pals in pub and none showed up xept the Dwarf who was so handy last time. Other younger warrior had retired from adventuring after one bout. So Asper and his lookalike followers four approached new party for a possible jaunt to one of the Dungeons. Also tailing him was Lilly a thief he had recruited and saved from certain death earning her devout loyalty. Neither ever been to Goblin mine and it was a popular destination. Cap of mountain riddled with caverns, caves and mines. Human, Dwarf and goblins all have used the mountain and Iron is deep into the depths now and too many dungeons to mine.

So they marched off across fields into woods the elf recognized as being kin to the dark elf wood. The elf is a pretty awesome hero with better stats than his master. On edge of fields was a gallows with rotting Barron's policemen hanging. Threw a rock at one up close and bodies dropped, alldhorror undead that made all the newcomers Flee. The elf just ran as all his friends did. Halflings petted with huge volley like a machine gun blasting apart three of dead and one fell at feet. Then it lept up terrifying away several halflings and missed grabbing a girl halfling by neck. Asper with swords finished it.

Everyone else came back and burned gallows and dead and Asper took dog tags.

In woods startled strange black deer with white dot markings. Thought nothing of it till heard distant stag grunt. Then wolves howled and storm started. Halflings all scuttled up and wizard did while rest  tried and failed. Elf blamed full plate. Then wolfs came and were fireballed into ash even though they all saved. Then the black stag man druid cast a lightning strike from the storm and shattered the tree. Two out of three halflings hurt a tad, rest landed like cats and threw rocks. Elf got in close and hurt and beast man returned bow with a great slash of his bone sword. Magic missiles finished off.

Nabbed his druid stuff. And debated. Elf said while evil was a being of natural order. Others said kill it, let it bleed. Asper treated its wounds and had follower halflings with poles carry the bound and gagged brute.

Someone will buy this freak", he cheered.

Outside dungeon entry buried the beastman with a hobbit pipe for a snorkel and a space for his face to breathe. Then went to check out the entry they had found. A rickety wooden and rope bridge over a rocky gorge. Hmmmph typical.

Sent halfling over and on way back he stopped and crawled back. Scared of sounds of fighting and goblins inside the mine entry. Asper went over and went inside. He saw purple goblin and green goblins betting on a pit orc fight. The fresh grown and born orcs offered them amusement older orcs would not tolerate. Asper walked up after one orc dead and loser greens left.

"Hey fellas, any one get in on this?"

"You couldn't help me with my gold could you? It's too heavy and back here"

As stared with amazement he killed them all with stones before they new what hit them.

Party came in and saw entry was abandoned human mine that had exposed graves before goblins burrowed in the rear. Asper was kicking corpses off a cliff. Was a distant giant turd. Asper threw rocks at it and a baby otough crawled out and the halflings stoned it. Saw mine car and tracks off distance. Went after green goblin and down stairs into chamber of mildewy mist. A circle of stone in middle of room so halfling threw a rock at one. Glowing eyes opened and looked about then closed. Threw nearby and saw more eyes. Elf identified as mushroom men. Spoke peaceably and swapped a wooden ogre child's doll for a healing shroom. Went on and found another track wih a cart. Before sorcerer could say that looks dangerous, five exited halflings sitting in it. So sorcerer cat fly on elf and he followed the halflings who chased down the goblins. They broke break handle and dived out and bashed goblins. Elf first aided them and left one gently with resting head. Asper winked and a halfling bashed its head in silently as party moved on.

Found a chamber of a crypt surrounded by dead miners. Opened with a cantrip and skeletal revenant came out. Part beat it back and tried o burn but it still healed so they it sealed up.  Found kobolds camping and one a pointy hatter. Surely a wizard! So spoke about trading potions till halflings and Lilly broke out and killed kobolds except two surrendered. Asper told Lilly to take bound kobolds and take care of them so their friends will find them. Elf seemed pleased about his heroic good influence. Lilly wiped kobold blood off her knife and returned.

Party find huge cathedral chasm with many entries, some lights, and can see scattered goblins rummaging through shrooms and mine rubbish. Decided to head back. Passed a shroom room and picked some edible, drug and poison shrooms for later. At least this party had shrooms they could bond over and they returned to Froghop village Tavern. On way saw secret police and sorcerer shocked to see halfling walk up and talk.

Halfling showed his official informant badge and gave them dog tags from dead men and they gave him a 50gp ruby!

Then it was beer and shrooms for all!

Exempt that beastman who might have been forgotten.
Posted by Konsumterra at Wednesday, May 28, 2014