Viking Log: The city of Irem to Mecca to Cairo 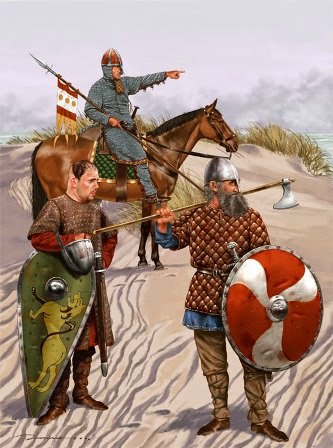 Vikings left Baghdad last time intending to travel to desert for lost city of Irem then onto Mecca.

Days of searing heat, had easily scared off bandit scouts. Days into desert a horde of 70 pagan tribesmen attacked the party of 25. Camels all made a racket as vikings prepared selves with prayers and put on a choice piece of armour. Thora and Johan managed to injure and kill almost 20 of them. A few more fell as spears and javelins got closer and a few vikings took arrows. Thothadr wondered if releasing his darkspawn was a good idea right now.

After the archers softened up the vikings then a charge from the horde with swords and vikings made a mess of them. Pole axe and spears set particularly good. Thorhadr started to just kill horses which unnerved everyone. Everyone is wary again of him.

Managed to lose many men and camels of water but all up killed and injured 40 men. Many prisoners and piles of swords. Had to kill horses from lack of water and went on. Had a hard time till another merchant band saved them.  Finally arrived at a trade oasis where locals would be able to help them explore the cursed waste.

Found a German knight there with start chart he was using to eek city as well. Vikings told local tribe leader man was a sorcerer in league with devil and tribe killed him. Party sacked his documents and found he had been exploring area. Maganged to get some of his baggage handlers. Heard from wise men of Al Azred, the lot city and the imprisoned demons there. Met a man who had been there once and bribed him to return.

Johan's wife sick so some of party went onto mecca including the loki berserk Loon.

Into the desert managed to scare of some of the starving desperate bandits easily. Days into desert made camp. Thorhadr heard something and saw a creepy humanoid with large ears and bristly sand coloured hair. Creepy and like a man but not like a man too. Party chased thing away and a few shaken by creature.

Nights later managed to injure one trying to signal party but a viking shot it. Grabbed it and bagged it while it was screaming. Heard it's clan scream back and eventually let it go in fear of creatures harassing them.

A few nights later Hrafn was extra careful to stay with water and awoke to see eight of the sand devils trying to damage water supply. Breidr and others slaughtered the creatures.

Finally found a collapsed ruin that looked like earth had recently swallowed up the place. Looked alot like German drawings but less intact. Could he have done this?

Guides led them on and into city. Spent a day lookinging around found thousands of shattered start stones. Throa performed her rune seeking trance and sat on the heap. Thora passed out trying to call a raven spirit again. Rest kept searching and Thorhadr had seen visions of area search intently an area. His suspicious cousins wary of anything Thorhadr interested in joined him and found a tunnel partly blocked by sand.

Into the depths they went of the forbidden city. Found a great mosaic mural of lizard folk. Then found galleries of mumified lizard men, sand people and a great kraken like horror that thankfully was dead. All troubled but gathered some mummy dust for a recipe from Necronomicon they had read of. Eventually ahead of them the guides with weapons and leader with a magnificent gold thoth headed hilt dagger commanded them to surrender. Vikings slaughtered them. Followed the way the cultists had directed them a found old cells. Also found strange compulsion to not leave area. Second sight aw emantions from ahead so they all headed there. Saw a sand person flee so chased it. Unfortunately into a chamber with a horror beond evil. A Cthonian giant covered in dirt and slime, a horror land kraken and it was laying an egg into a sand persons hands.

Vikings kind of snapped. Alrec ran at it crazed and hacked off a tentacle, others prayed and Hrafn ran to help his brother. Those praying almost wiped out party by pausing. Alrec grabbed the bleeding sulfur tentacle and started to eat the Ichor. Another tentacle hit him almost destroying his arm. Johan sat back vomiting again. Thora was in shock babbling but managed to heal Thora. Hrafn got some good hits and his parry attempts wounded the creature more. Finally Breidr charged in frenzied with a sword in each hand and finished it. Hrafn was partly crushed underneath but alright. Alrecs arm healed and functional again. Hrafn stomach burned from ooze he ate and others tried to make him be sick. He had crazy idea would grant him godlike powers.

Found chamber with sand persons and some cultists, one was suckling blood to a baby cthonian. Others crawled on floor and some eggs were there too. Party destroyed everything and increasingly frazzled. Alrec took an egg perhaps it was worth something.

Also found copy of Al Aziv of very own. Alrecs dream o reading a book was going to come true. He had been studying from the Koran for nearly two months.

Wandered around more and discovered strange golden metallic door. In minds a voice asked who lay slumbering beneath the sea? Cthulhu of course and door opened into amazing chamber with four more doors. Then door lammed sealing them inside. One door opened for Iquatha to a barren glacier with frozen corpses in ice. Home? Nobody interested. Another opened for Shudemael to a blasted volcanic wasteland in darkness. The next opened for Cthuga and saw giant sun over a black lava plain. Final one they couldn't get so found description in AL Aziv of very room with a few hour searching. Opened for Yog Sothoth into a crystal chamber of mists. Alrec and Thorhadr went into mist and returned looking weary with hair grown and no memories. Everyone pulled the out sensing a superiority about them. One held a gold scepter other had a elder sign. They hastily closed door so could open the Cthulhu door again and fled. Alrec and Briedr had been a way a month and now had new knowledge of the mythos and the stars and nature.

On surface all guides gone or dead. Throa had been on rune quest in spirit world and had returned from it with knowledge to make an elder sign. Crazy old Johan was sure his knowledge of stars and what he had learned from arabs would hep them get out of here.

Found way from desert and arrived back at oasis a mess but alive. Relieved they had killed the evil the vikings rested. Thora had lost 40+ sanity in adventure and recovered. Johan got down to 4 SAN. Thorhadr spoke to his god Tsathogua who told him his sorcery was progressing well and gave him more visions of the French version of the Book of Eibon and taught him a ritual to make him an immortal insane cannibal. Is aware that the god are competitive and can be turned on each other. Thora had a vision that the Hyperborean reindeer god was a stooge for Cthulhu cult to drive out Tsathogua. The reindeer cult symbol was upside down more like a squid. Travelled overland and found friends and headed by ship to Cairo. Left the Arab Doctor who had considered betraying them all to Mecca officials. He had been persuaded vikings on gods quest.

Got boat and camel train to Cairo and saw Pyramids. Hrafn having dreams from the Ibis Knife. Under second sight it is most powerful item they have seen. Johan's wife recovered and Alrec reading Al Aziv. Hopefully home by winter. From all the san losses, reading and the crystal chamber of yog sothoth several have 10 -30% mythos now. Two that have no mythos have 99 SAN.
Posted by Konsumterra at Tuesday, May 27, 2014