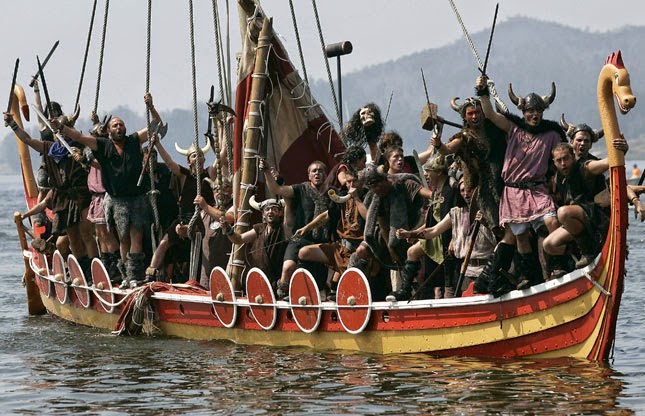 Apologies for helmets in this pic but it captures something still...

Hrafn Chief of the Norway Stonedales and part time were wolf
Alrec the Unruly, Cheif of Iceland Stonedales and ship captain of the Wavebiter
Briedr leader of the family farms and trade
Thora a beautiful holy healer of Freya and awesome archer
Throa Wartooth a blacksmith, boat builder and now rune mistress
Thorhadr now a famous bard
Johan a mighty helmsman and a bit unbalanced worshiper of the sea god

So Hrafn had a fierce duel with the kings shield maiden Asra to win her hand and 3 ship dowry the king offered. His cousins and brothers offred to cast spells on him for luck but was pointed out out this was technically cheating and if ever came out would make bitterness. He managed a few good bloody blows and she managed to smash his shield to splinters before he cut her leg then abdomen bringing her down. She lunged at his leg finally hitting him and almost crippling him. Both crawled around and he managed to strike her lame leg almost cutting it off before she used her superior fighting skills again. His sword was blunted and shield ruined. She was carried away by priestesses and he was worried he had killed her or crippled her.

She came too a few days later and marriage was set. the king befriended Hrafn and drunk with him while he was bedridden for ten days. After two weeks the scarred lovers were married and locked in a house for a month together with mead and wedding gifts. He gave her his old wifes sword and a gold necklace and she gave him a new shield and taught him a secret technique to make him a great sword master.

Others traded, sung songs, recruited sailors and worked on making friends in court. Alrec made friends with the Loon, a dangerous crazy Loki beserker. Throa suspicious he would betray them, rob them and kill their children. Hrafn asked wife why king kept him around.

Asra made Hrafn promise to never lay with another so he gave her his ugly hyperborean girl as a handmaid and gave up his wolf girlfriend who he had taught to shapeshift into a woman. Gave a pup to Throa in exchange for her enchanting his sword more. Asra stayed as kings bodyguard and promised to avenge anyone who killed Hrafn.

Throa considering when her old rich husband dies of marrying his son and considering her werewolf pup ought to be old enough in a few years. She did promise not to embarrass husband while he lived.

Johan got his wife Yevette to befriend Asra as she was a superior woman (both bigger and stronger than any of the heroes). Johan also used his newly gained seal command magic of sea god to catch and train 3 pet seals. Throa had been studying runes and enchanted Hrafns great already blessed greatsword Anklebiter. She also worked on her mace and learned wood carving and singing to enhance her magic. Breidr recruited many sailors.

Sent warship and trader away on business in Britain and Ireland and sent most of wives to Iceland for safety. Considered various raids but christian monks encouraged to explore the seas to north for heroic exploration and adventure. With encouragement vikings went north with summer opening passage and after a storm found a strange island. Sent seals to search and came back exited. Thora summoned a raven spirit but passed out on deck for two hours weakened and unable to heal or use magic. Sent small boat to and by stealth while seals carried Johan to shore.

Naked savages spied on them and they chased them off. Through trees to craggy peak which they tracked natives. Evidence of fire, crude fishing and no other animal life. Found a cave which Loon searched and amazed all with his stealth. Returned telling of opening in hill with pond, monolith and cultists dancing chanting Hardaa Hardraa Hardraa!

While Loon, Thorhadr and Johan crept inside, others ascended to peak and Hraft climbed up to peak and helped Thora up with a rope.

Spied on cultists and saw viking prisoners and warriors dancing naked with them. Priests fingers were moving oddly, his face a mass of fleshy squirming feelers with no lower jaw.

Hrafn slid down rope and joined others for charge.

Johan crept up on women and children and old man poking 3 captives with sticks. Loon and Thorhadr crept up behind monolith and waited.

Hrafn and others charged in with Alrec cheering on with his commanding roar. Johan lept out and killed old man and freed viking while his wife came up behind him. Loon charged the priest haking him into a limbless headless torso impressing everyone. Thora and Thorhadr threw spears, Thora fired arrows from clifftops. Battle raged and charging Hrafn, Bredr and Alrec cut a swathe through savages including viking turncoats. Loon killed two more. Alrec cried out to Loon as he was struck down with a javelin to the head and he was stabbed in abdomen and fell too. Thora shot men trying to finish Loon and Thorhadr covered him with a shield.

Vikings with superior armour cut swathes through savages and freed swede killed several boys tormenting prisoners while Johan and his wife killed women. Even the Christian came with his staff and finished the downed devil worshipers. As Hrafn carried his brother Alrec to safety, and Thorhadr grabbed Loon and priests dagger. Thora screamed at them all to run. Her eyes widened in terror and she lay flat with her bow. She saw mother hydra's shadow under the water from her vantage. Others killing wounded looked and saw bubbling pond. Throa grabbed three native babies and ran.

A great fishy humanoid goddess arose screaming, showering all in dark salty water and blood. Johan unstable at best of times thought it a daughter of the sea god and a giantess and began killing wounded in her honour, his wife tried to drag him away while rest ran away. Breidr freed the two tied up men and one helped drag of Johan having seen his comrades touched by madness.

Thorhadr crawled behind monolith with Loons body as rest fled.

He saw Thora shoot she demon in eye and beast cast a spell of madness in return, driving her away. Thora scrabbled down rope to safety. Thorhadr watched in horror as goddess picked up wounded cultists, bit in half, shower herself in gore then find fresh victims. Trembling he watched the gruesome feast and quietly held the wounded madman.

Eventualy he walked from cave after goddess left and took some gold from the altar. Relieved others all ran to shore with him, Johan now over his madness. Throa inspected babies on the ship and found one had gills. Asked the three Sea serpant worshiper brothers of crew who warned that one was a first generation chosen one so she dashed brains out. Deciding two possible fish man hybrids trouble so she killed female and kept the boy. Fishman gold cursed but still valuable. Thora saw island vanish from distance with her second sight.

Sailed to Iceland to heal and rest. Still time to explore this year.....
Posted by Konsumterra at Sunday, May 04, 2014