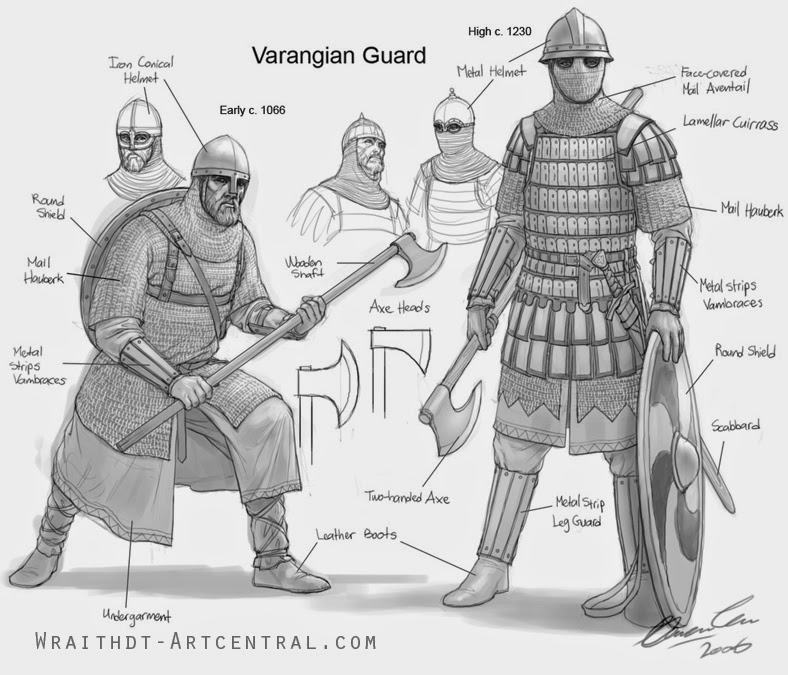 Other Cousins
Johan navigator, helmsman and mentally unstable worshiper of Sea god
Thorhaddr the Skald worshiper of Hiemdall and Tsathogua

Regretting burning those arcane books 7 years ago in the Abbey of St Bartholemew Vikings travelled to Byzabtium. Spent time shopping, seeing sights, staying with Pagan Viking minority. Went shopping for magic books. Some looked at weapons and got plate armoured arms as local vikings had.

Collectively bought an Arab Doctor Nabu to learn Arabic and medicine. Alrec got a Arabic woman and a child. Got some occult books and cultivate new branch of knowledge beyond viking mythos.

Thorhadr talked to his god Tsathogua and discussed the comparability of his gods and he was told weak gods take your power because you are cattle. True magic offers immortality and no limits of power and knowledge of great Truth. Was taught a spell to blur memories. Decided he was watching for threats by keeping a Darkspawn and talking to elder god so in accordance with Hiemdall. Besides Cthulhu and Tsathogua had beef and he was willing to do anything to stop the end of the world.

Given visions of ruins of Gharne and Irem with tempting star stones and a building near warf he had already seen. Checked it out was a small closed and boarded temple of Posidon next to a large former customs house. Had sea motifs carved in building. Seedy sailor scum from many lands sat on steps and lounged about like hoodlums. Was a flophouse for sailors in need run by Benevolant order of Dagon.

Thora met order of St Barnabus Greek branch and found the city HQ of the Cthulhu fighting order the Vikings had raided when young. Most of those first thralls dead and last two assimilated Freya and Thor cultists now and freed for this voyage. Greek and Roman church monks, former monks and Vikings all agree on fighting the demon Cthulhu more important. Arranged to study some black books. Had a senior abbot locked and gagged in basement from reading Greek Necronomicon. Alrec decided to learn Arabic from slaves with Koran as this reading stuff seemed to be getting more important and all those books he used to burn possibly valuable.

Johan and Hrafn spied on Dagon order and climbed onto roof of temple to hear chant inside. Apparently they were told Poseidon cult was divided and this sect closed 60 years ago but still considered sacred.  Found two locked rooms one couldnt get in but Thorhadr picked one and found girl from Syria wrapped in a carpet. So climbed downstairs to watch cult chant around sea water well with a chain set up to be lowered from ceiling into pit. Cultists came up to find sacrifice to Dagon and found Vikings who killed them instead. Fled with girl who Johan and Wife adopted.

St Bartholomew council of war against old ones agree to get Star stones from Arabs and send party past Big library in a hidden monastery on way. Warned that in Byzantium had to fight in secret as cultists everywhere. To stop cult need to disrupt their ceremonies at the right time, destroy or remove their relics and place your relics in the castle of the Leviathan.

Johan and Thorhadr returned with evidence of Dagon cult and time to interrogate loony former librarian. Thorhadr tried to talk in brief but started to try and get spells from the unmasked chained man and Hrafn kind of displeased. More indications to find the city that inspired the Mad Arab.

Doctor Nabu said if he could go free he would guide party as needed to Mecca. Was a row and some wanted a 7000 in silver ransom too. Because being mean and cheap always wins on adventures.

Party assembled with merchants, four knights of st George. Marched though Anotolia through mountains with escorts and taken up elevator to tiny monastic library. Met local monks and shared tales. Alrec wanted to read his first book ever and try his Arabic skills so he aked to read Al Aziv. Didn't happen but a good first read.

Moved on through to Mesopotamia passed mysterious carved humanoid gods in mountains and unreadable script of ancients. Down Tigris-Euphrates river basin till camped in Ruin of Babylon. At night heard digging and men. Went to catch by surprise as drunk and bored and ambushed treasure hunters. While others looked at men's loot of strange clay tablets and questioned men (and killed some). Alrec and Throa the impulsive ones went into opening and found the tablet mine tunnels and followed.

After about 10 minutes in darkness in burried library, a striking naked mature woman stepped from darkness and smiled. Alrec was keen to touch her and Throa pushed in way. Throa spoke to Lamia and bargained lives of prisoners for location of a burried star stone and her cousins left unharmed. Lamia came to surface and now clad in clothes. Thora freaked seeing its true form with thick black hairs and bird feet. Alrec grabbed first victim as agreed and she kissed him to near death. Dug up a temple of shamash and found stone she had seen thousands of years ago so she could now move freely. Drained other men and vikings returned to camp.

Morning in Bagdad. Party with reasonable searched for the tablet buyer the tablet diggers knew. Had one mention something like a star stone and man was a wizard. Sold tablets to a servant and and tried to impress him with occult books and relics of Hyperborea to see his master.

Fat jolly wizard Anbu in turban was pleased to see goods but laughed at their not very blasphemous occult manuals on alchemy and roman prophets. Bowl of otherworldly visions party got in Greenland pleased him very much and discussion of Hyperborea emerged.  He asked to see more and they showed him h bell from Tsathoguas temple that was a shoggoth control relic of the Old ones an age before Hyperborea. Old mad librarian had given them an inkling of bell. When man saw it he begged then to put it down gently. Offered a silver ingot worth 4000 pennies each relic and copy of Pnakotia in Greek. Party bought another black book in Arabic and man scoffed at Irem and Arabs knowledge but drew them a map to Irem. Thoprhadr showed what he kept in a stone bucket and was amazed. Rest of party did not look but appalled. Came out about whole in communication with Tsathogua thing.

Discussed in indirect manner nature of mythos philosophy with Anbu and Thora increasingly suspicious he was not human. Truesight of Thora confirmed she had never seen aura like this.

Celebrated with Anbu after sale and party returned to Greek hotel. All argued about Thorhadr's possible treason and some wanted to kill him and monster. Thora told him gods displeased and he rationalized a looking out for threats and that he knew of most of what Anbu said but didn't want to blow their minds. Some discussion of killing Throa's adopted deep one cult kids. Sh agreed to throw them in the sea and let Dagon sort them out.

Thora vexed but undecided declared she would ask Freya for guidance. Spent several days on building a ritual cult wagon and sanctifying it as a shrine. Called for Freya's Wisdom in seven words according to spell.

"Kill as necessity - Time is not right"

All cooled down and watching Thorhadr. Now onto Mecca and Irem.

Anbu very happy to destroy the masters control bell. He had not seen one for millions of years. The mirror was worth some kicks and the books would drive them mad just like Abd-al-Hazred. All at a great price.

In the North Iquatha is hatching plans for ones who have harmed his cult to return.

Deep ones increasingly getting testy too.
Posted by Konsumterra at Sunday, May 18, 2014