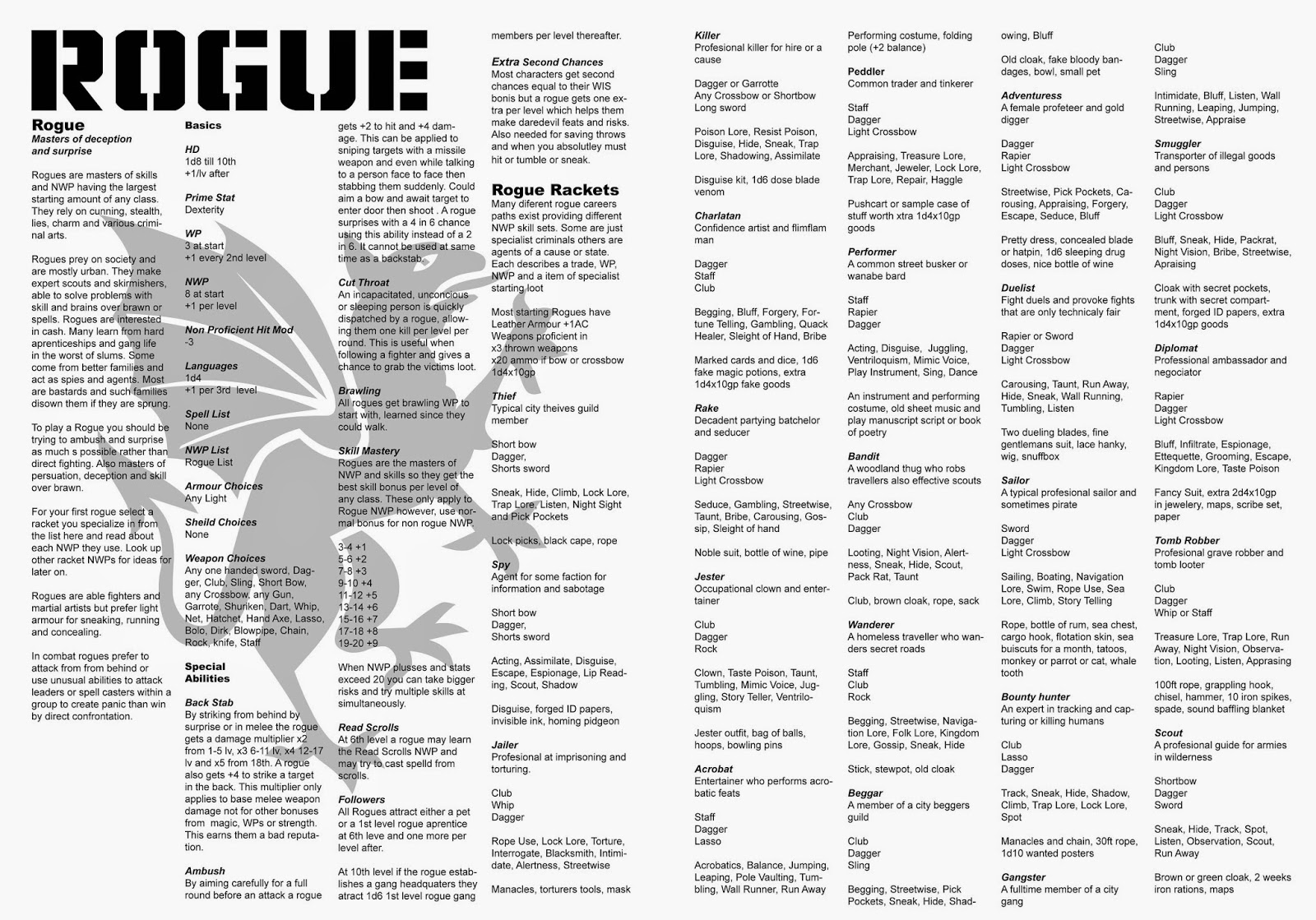 Rogue done and working after last changes. Don't attack as often but I am letting backstab more as I was always afraid of them but not as bad as I imagined. In play rogues hit foes from rear, tumble into ranks and kill casters and leaders with athletic feats rather than brute power. In my 13 lv heroes in hell game rogue was invisible with items a lot and casters put improved invisibility on him which meant more deep into enemy rank strikes by backstab.

The cut throat ability inspired by several bloody historical assassinations. Worked well and kinda horrifying. A flaming sword on some trolls would make this priceless.

Im giving a few classes brawling for free = a 1d3 martial art using any body part and able to grapple and able to attack even if tied up. Warriors, Rogues, Halflings, Abhumans for now.

Remember I ditched XP so im trying to beef thieves up a bit.

Skill bonuses and second chance makes thieves stunts more amazing which is what I want. Warriors perform feats of gory massacre, wizards blowing stuff up and Rogues leaping, diving and taking foolish risks. When I do use traps I use alot and they can easily burn up this buffer of second chances. Previously I had WIS bonus equal second chances a mix of planning, will power and guts. As rogues often caught alone, up front or in business end of traps this works well.

Changeling in play now 5th Level and has a bear abhuman follower. While he casts spells and uses his lightning and and does some spell enhanced magic, now he has beastman kin to do brutal stuff and be bodyguard. I realized a changeling who changes class to Monk could do very well in my system.

Hobbit class is better than I expected and the multiple rock throwing thing very handy with undead. A little more nudging as meant to be a fighter-theif. As Ive given Brawling as a free skill I will be replacing situational mods with outright skills or picks from a list of skills. I might design some halfling bad guys (or good guys with the current party as they are pretty evil bunch more suited to being hung than heroes). A high level rock thrower could mess up some spell casters.