Exilelog: Back to Devil Hill Dungeons 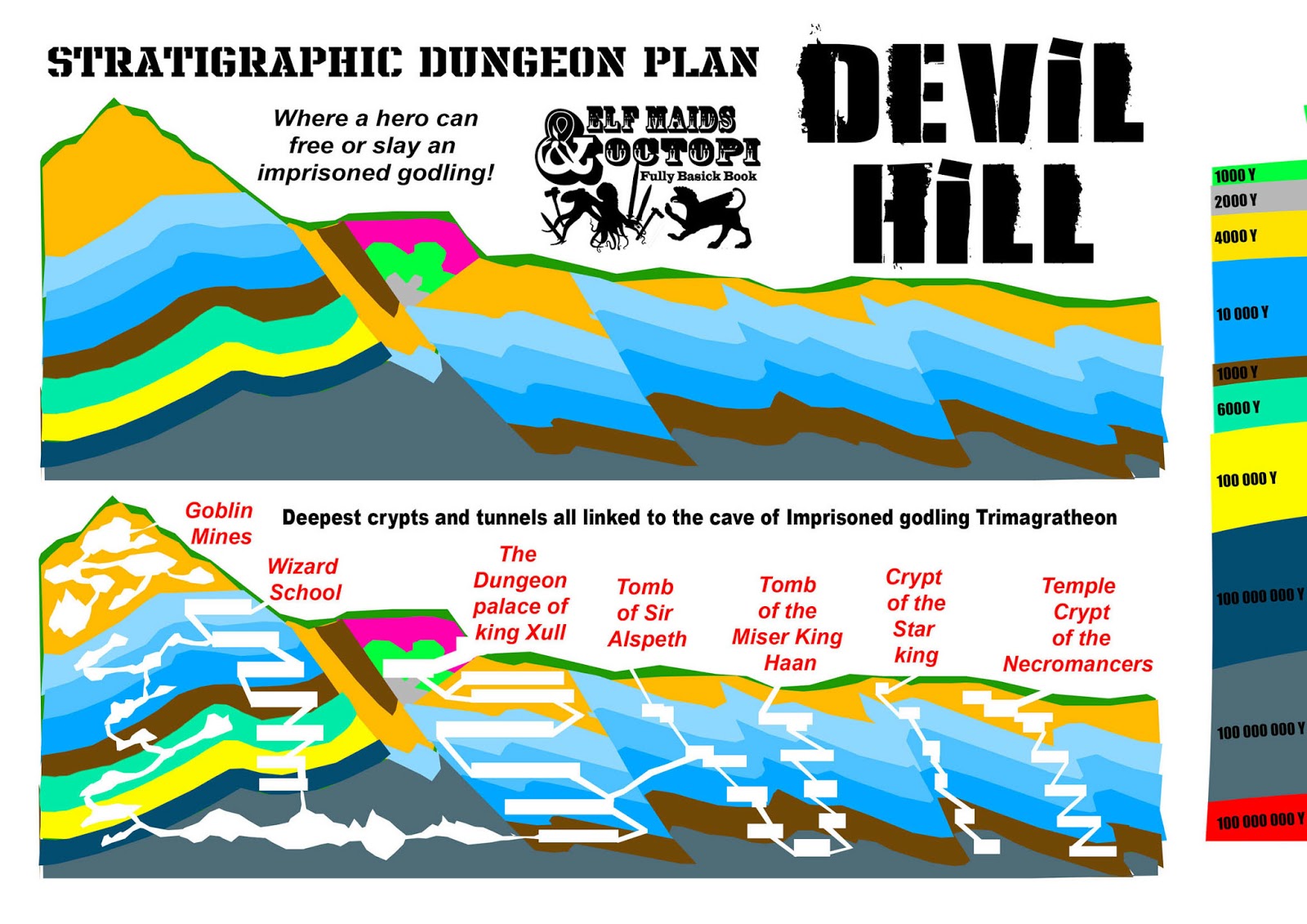 Licensed Dungeon Adventurers: The AAA Dungeon Company
Also joint own lots of ex squat houses, pubs in various suburbs. Affiliated with a street gang who since worked with party have accepted young pyromancers and necromancers who all hero worship the party. Gang now the flaming skulls. Party have paid taxes like responsible citizens since having been unwilling guests of the Barron before.

Asper the halfling sailor - former trident expert, now maxing out in two short swords and rock throwing. With his four younger followers it is like having a machine gun. Also has thief girlfriend and a nanny for baby monsters in his growing collection of pubs and rat on a stick vendors. Wanted by a cult because of a tattoo he has that cult can use to create a new temple. Dad vanished years and, mum more recently after getting mad wizard to change his face. Now he gives free similar tats to any halfling who stays at his discount for gullible young halfling inns. He is mildly chaotic evil.

Kalimar the Necromancer has her heavily armoured body guard, old school chum and a new apprentice who looks after the the tower building work crew. Owns a flat in wizard district and a tower soon. Has a nice lab and library and armchair. Keeps a dozen flaming skulls in a stone chest and summons undead to her fights from the underworld. Graduated wizard school and already a success. Did good as a grave robber and consultant corpse valuer/dealer. Is always surprised if anythng gets past her flaming skull barrier or bodyguard. Has a powerful raven familiar that can cast spells and is ever evolving. Lots of destructive and summoning spells. She is kinda nuetral with a gonzo romantic philosophy of the dead..

So half party dis shopping, divided treasure, got mote property. Dealt with newfound status as having willing followers. Set off to Froghop village on road, let others catch up later and follow the corpses.

Gang went through the crook run shanty town as sure were tough enough. Just before, 20 archers and six local bandits stopped them on the road. Kalima and her girlfriend and familiar called swarms of skeletons and her bodyguard opened the chest of burning skull horde. Burning ones killed the bandit heroes in a round tearing them to shreds. Half of archers captured. Asper sat back and clapped, his students followed. Party scolded bandits for being weak and lazy and stupid then gave them jobs in gang.Kept best three for dungeon support. Collected a sack load of human heads from freshly dead which was for creating more flaming skulls and doubled as incentive for surviving gangsters. Pretty girls skinned skulls from pile of severed heads with glee as the murder hobo heroes got exited for blood.

Rode into town and paid for all to dine in merchant compound and newcomers impressed. After lunch went on to Froghop village. Local tavern: The Horned Toad. Bustling with locals living on the periphery of "village to dungeon economic zones".  Wild, fun and full of adventurers. This is where party all first met. Well Asper did. Others still a mile underground. One gang of filthy rogues and warriors with a priest at least. Another from the Empire, with paladins and priests. Whole party agreed to give them a wide berth. A few mercs one young and keen 2nd and a boastful 3rd. Hired the cheap young guy. Recruited a dwarf 3rd. Avioded the seedy guys. Rested, talked to barmaid. Went to bed early.

After wild night gang with undead, early in morning party and pony cart party went to the dungeon. Undead pony preserved and covered in blankets. Necromancers in party opposed to posers in goth makeup. Very low key and wish to avoid mobs.

Through the forest and over the huge rock bluff to the foothills of Devil Hill. Asper was telling everyone about the time that they were chased into the dungeon entry they discovered because a wyvern chased them and killed one of the party.

Party readied themselves and prepared coordinated volley as three wyvern cam in at high speed snatch and grab. Volley of arrows, spells, halfling rocks wounded all three and a new bandit archer snatched man away. Calmly walked into gorge to entry they found from the previous 3 month long crawl in this hell hole.

Inside passage found 60 foot deep 1st dungeon floor. Met 8 gargoyles who despite resistance to most of party were beaten back and all impressed by dwarf with a +1 axe. Chased survivor through corridors through chamber with a well. Sent a slave Kobold in one of six in party purchased in market. "All trap lore masters, every one bless em!"

Kobold ran up ahead to look for traps a flyer might have evaded. From well cave lizards swarmed, nipped kobold then mowed down by missiles. Kobold ok. Followed to a throne room replica in tomb and found lotsa secret tunnels. Also opened a crypt room where 6 wight guards attacked. Party all scared and coordinated. Those unable to do anything backed off with loot mobile while best moved in behind spells. Dwarf was drained in battle said was worth it and stood by his tactical responsibility. Party awed and wanna help guy. Which is not very evil or neutral but awww! Found lotsa electrum and potions, offer to get Dwarf healed. He knew the first dwarf who joined first delve.

Found more gargoyles and got most in a web, killed a few then torched the rest and killed them all. Same one as before escaped after helping party to kill 13 of his kin by being gutless. Then found another crypt with 4 Wraiths which were a whole lot more horrible. Skull worth their bad rep and were very effective. Dwarf drained again. More loot, so far covered the healing and made some money. Know there is a bastard crypt keeper somewhere out here too. Party retreat to surface.

Got to nature god shrine for the Dwarf but will take two days and a lunp of cash. Made some profit and new flunkies and got core of a level gutted. All other parties use Tomb of Xull or Goblin Mines so party having own entry handy.

Four burning skulls and a bandit archer and a kobold died in the making of this adventure.

Kobolds henceforth K1, K2, K3, K4, K6 were given lots of grog and lizard meat when not kept in sacks.
Posted by Konsumterra at Wednesday, May 21, 2014