Vikinglog: Kingdom of York and the Dreamlands 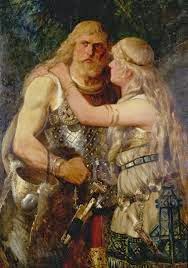 Breidr the Dauntless, a handsome farmer lad now clan head of farmlands in Norway. Some spoilers for Chaosiums Spirits and Visions of the viking age scenario.

Thorhaddr the Fair, a clumsy unlucky boy now growing fame as a bard. Sadly father died before saw his son raised by hostile richer clan make himself more heroic noble figure. Also clan feud over from Johan's wedding to rival clan. Otherwise he might have been a cheif now. Has a pretty young wife in Iceland and has some note as a story teller, poet and musician. Has now three magical heroic songs.

Cheif Alrek the Unruly a strong, handsome and outspoken hunter now famous rich head of the Iceland Stonedales. Dedicated to Thor, keen monster slayer who leaps over shield walls in battle. A famous singer and has now six kids.

Cheif Hrafn his quieter brother a werewolf beserker of Odin who is a master swordsman and head of the Norway Stonedales. Finally able to assume wolf form but has yet to use near friends. Has a magic bastard sword anklebiter and armour fit for a noble. Quite a poet too and grieving for dead wife.

Throa Wartooth toughest girl for miles now unwed mother, wealthy blacksmith and warrior. Has made a famous iron mace. Has several children to thrall monk Hugo who has died recently. Honestly she didn't kill him but men more scared of her now. Her cousins have fearsome reps too and help her out. Lives in Norway mostly.

Thora the Red her sister, been learning the secrets of Freya - the party magician, healer, archer, matchmaker and holy person. Has begun to summon raven spirits to explore but risky and dangerous. Expert on magic and moral advice. She loves Freya but Odin favours her for her killing arrows. Married a clever merchant and has bought him a ship and concubines since she is sterile after hard birth. Has a house in home village and Iceland. Has helped many siblings find partners.

Johan Hotfoot a new young clansman out for a good time - is one of flashiest in the clan and lives like a rich man or minor noble. Finally married and to ex rival clan bringing peace after generations of infighting. Apparently Stonedale head was having affairs with several of their women too.  Devoted too seagod and sailing from a humble fisherman. Famous for being the fastest. A bit unbalanced from horror he has known and knows some strange things.

Lieft Stonedale a new comer fisherman with a young wife from Norway. Has picked up strange secrets from island cultists of the Midguard Serpent. A good sailor already rich from adventures.

Razelin Stonedale just joined a fisher/farmer a bit too keen to be recognized. Sent by family and borrowed a sword and horse.

So heroes attended duel of Hrafn with his dead wife's ex husband who insulted him. Hrafn struck him several times so he could not stand and he kept fighting getting a good cut on Hrafn before he fell from many cuts. Hrafn beheaded him. Luckily two adopted sons hated dad.

Tempted to take head but gave to family who thanked him. They saw he was tempted. Every one even his kin knew he was a mean beserker. Party recruited men for new 50 man warship the Sea Dragon. Let hired captain lead his own crew on the 30 man Wavebiter for a ship owners share. Best crew taken for new ship. With Thora's Knorr trader and the old and new fighting ships they sailed to York in Briton to Bjiorn Bjornson's invitation.

York was big, thousands of Danes, Christians among them. Areas with mixed Saxon and Dane populations and religions. Rich farmland and opportunity. But religious settlements being disbanded. Fortifications and Saxon unity have stopped Viking advance cold. Trade and truces in effect and populations speaking both languages. All disappointed about lack of easy monasteries but got an offer from the king for a job. He had a man die and now English widow insists is local not danish now. King sent a man to marry her but they hate each other. Ask them to help. Throa mentioned their help is more in beheading field than diplomacy but king wanted strong presence and if need be violence might be needed. Offered reward of land and silver and thralls. Working for a king is always good for your honour.

Set off on horse and arrived in evening to town quiet. Everyone dead. No wounds or sickness. Found vikings and saxons everywhere. Tested food and drink on goats no harm so ate. Found every building locked from inside with all dead but found several still on deathbeds. Saved three. Thora saw with second sight that some spirit had drained them to near death. Went into hall with some guards. Put all christian dead in shrine shack and Danes in hall. Hrafn's old monk thrall of four years was crying lots and tried to prey for his former people.

So heard some villagers muttering outside and got up went outside to search and Alrek found a weird cave. All felt a bit dreamy and odd. Hrafn shoved priest through door and he cried. Came back when ordered wincing at odd sensation. All party went through. A brown robed spirit indicated a mask was stolen from him and needed it back. Tried to ask questions but it was not helpful but asked some good questions it did not ignore they took a yes. Went home through barrier again went to hall. Searched everything for what spirit wanted no luck. Went to bed.

Three saved people awoke screaming about brown man. Said that the two people party meant to help marry had a fight last night. She had run off and he chased her on horseback. Realized they had never left house or searched village night before, was all a dream.

In morning found trail to witch house found dead witch. Raz found a younger woman's footprint. Hrafn stripped and became a wolf found woman's trail through forest to town. Party entered mixed Saxon-Dane town and guard happy they were not invaders and ok. Went to lords house and saw impressive church. Lord was getting the would be groom drunk and he saw no sign of woman. Thora saw masked spirit in dreamlands in the market place. Suspected woman stole mask, killed villagers, her teacher the witch and had entered the dreamlands to kill everyone here next.

While lord and groom heard party news of dead village, messengers delivered corroborating news others had seen. Lord, the groom, priest and troops left. Party settled down and scoffed witch's drugs with a recipe Thorhaddr knew. Throa, Leif and Razlin all vomited and had to try again. All in dreamworld but realized they could not use weapons on the masked witch. Even Thora could do nothing to initiate combat. But Alrek got its attention with insults, trying to provoke an attack. Lief did a better job but the spirit won and he fell lifeless. Thora stepped in and battled then took mask. A few magic points in a magic tusk helped her win. She released Liefs soul and revived him. All returned to bodies to find unimpressed lord and his family around unconscious vomit covered vikings. Rested, next morning went to the Brown man and returned mask. Several accepted a bond with the god and he taught them Contact Brown Man. Thora realized he was linked to the black ice bear spirit she met in Greenland (Nyarlenthotep). Most were relieved and restored by the victory (SAN).

Spent summer with King of York (Jorvik) and were rewarded with thralls and farmland and a cow. Hrafn offered a rich christian wife but she was too ugly. Thora got a house in York and rest set up a farm which young Razelin would manage. Rest all went home for winter.

Thorhaddr finally had a child and got a good rep for his haunted stories of monster hunting. Hrafn joined a wolfpack and had six puppies. Then sold one to Throa. Alrek settled in Icelandic rich house his wife demanded then she died. He gave Daughter huge dowries and considered a new wife. Thora helped Throa find a rich ugly old viking aged 45. Some take if he died she could marry one of his sons. He offered her a good dowry for her two illegitimate daughters to poor dead Hugo the thrall-monk. She promised to bare him sons. Thora has her pretty thrall maiden give her husband twins so she was pleased with that purchase. Leif is hiding all his cash and not spending any the miser. Razelin married a christian girl with some cows.

A few thralls and horses died too.

Old rival clan now with Stonedales redividing farmland among less people more efficiently. Mixing herds and bloodlines. Both prospering and new Settlers for York and Iceland. Turns out several are actually cousins for three generations of stupid rivalry and sly romance. Will hit some more Ravenar Saga adventures now almost 10 years in game time and will run parts of Trail of Tsathogua. By end of campaign players will be taking adult kids with them.

The castle of the Leviathan is coming.
Posted by Konsumterra at Sunday, April 06, 2014