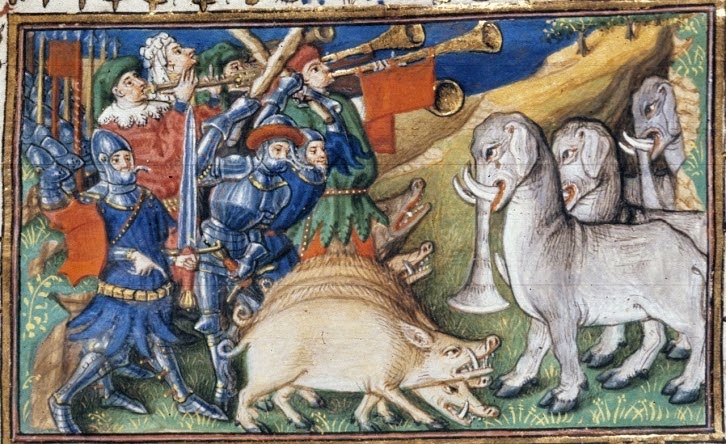 So the party has been on the valley of Eternal Rest caper for a while now. The nasty party slumlord graverobbers return for more loot. I had to be nice and juggle the order to prevent TPK because Im a nice DM. Our halfling pirate with new bodyguard, elemental chaos priest, exiled dark elf with riding spider and priestess follower, necromancer with her bodyguard and assistant and familiar with new changeling bear helper arrived.

Realised most of party who had been before cursed somehow. So first tomb behind a nasty sundew that surprised entangled and hurt most of them before a careful fireball singed the core plant but not party. Got past some traps and found a secret door in roof. Spider climbed up shaft and found treasure so rest climbed up. Chests trapped so they smashed open and got a good haul of gems and magic weapons superior to own plus a wand.

Kept going and climbed up a shaft to be attacked by undead which was tricky until most of party got up shaft. Found crypts but there was a gong in room so halfling threw rocks at it. Awakened tomb guards and killed the lesser meat monsters. Opened the gnome crypt to find open gold plated  coffin and emaciated dead gnome. Was a black well and halfling the best swimmer tried to traverse but would not risk going past his half way breath holding point. When returned the necromancer gave him improved CON with a spell and he managed to get the whole way through back to the entry passage they ignored earlier. Gang dragged out coffin and loot and took to city. Went to a lawful good temple to evaluate loot because those guys dont lie. Gave up a gem for deal which was 100 gp more than should have and Asper Cumberbitch the halfling swore at them so priests told them to never return. But they had a stash of gems and a +2 Shortsword and Scimitar now.

Plenty more good temples in town later he said. So back to valley and could see that whole party now cursed. Halfling recruited a pretty thief from his gang. Next cave was crawling with horrible glowing worms. Battled sons of kyuss and thief almost killed and inflicted with leprosy and changeling bear got the hang of wand of lightning while other guys burned the regenerating horrors that went down. All jumped away when floor collapsed into a worm filled pit and they killed the super worm mother. Finally battles a mummy mummy and her two kid mummys getting only a necklace. Back to town and healing costs minus the foot netted a few hundred. Damn.

Returned again to pit filled with corpses. Threw rocks at them and skeletons got up! Threw rocks at them killing some and before skeletons could get out of sight the bear changeling cast web on them. As they killed skeletons many with lightning but the remains would merge into tougher ones so took a long time and 4 generations of skeletons before set mass alight. But halfl had got to cover. Guys dropped down and started to fight woth clerics turning some. Bear could cast with no gestures so hung onto rope while casting till room. All got down and a long bloody fight before all destroyed. Up the shaft the valley guardians were waiting. Party chiseled open sealed crypt releasing an angry demon. Doh!...

Am working on my heroes in hell birthday game which went well then vikings tomorrow.
Then back to d100 stuff