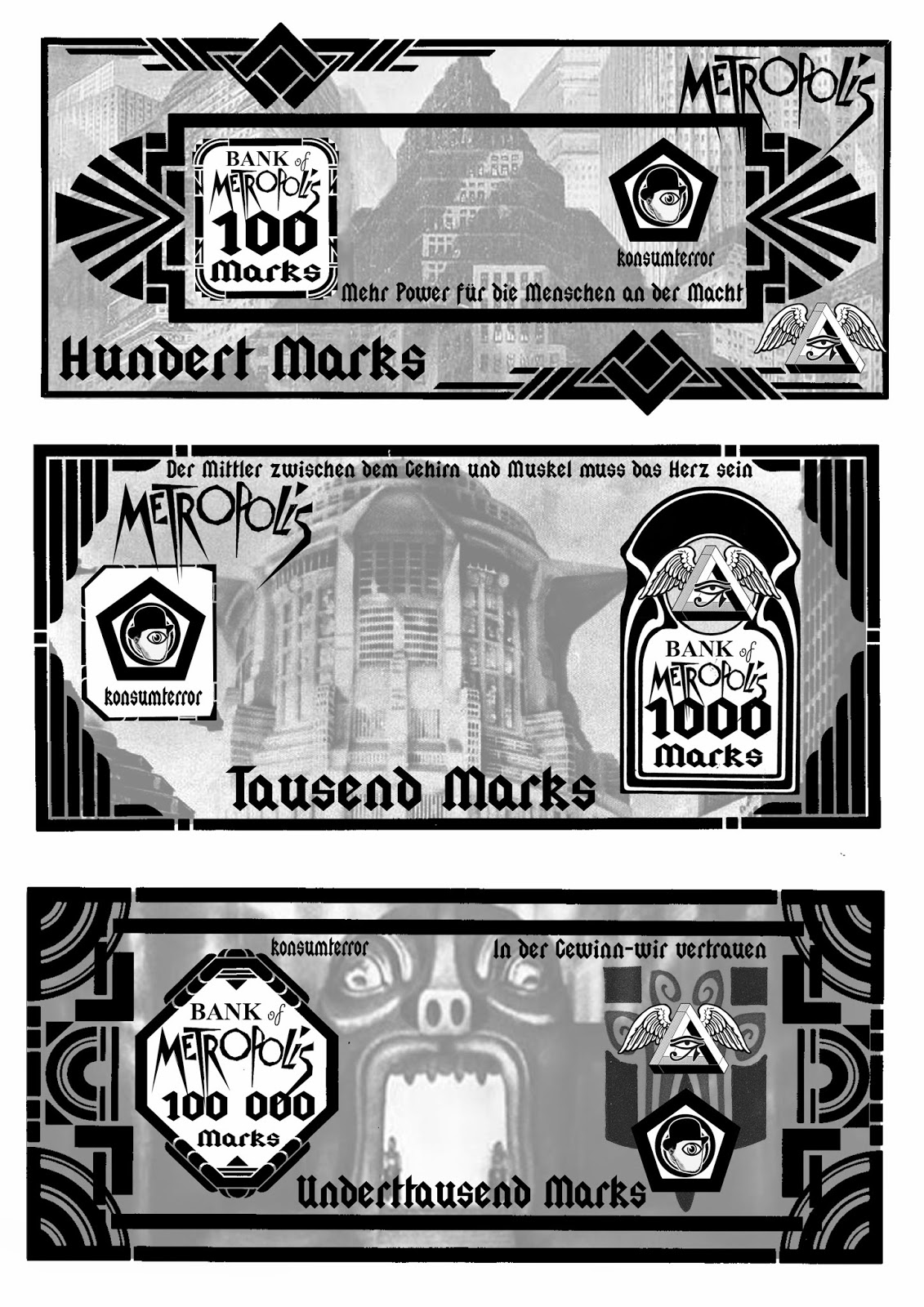 Some notes for my Cthulhu Metropolis setting I'm running for the EYE CON.  This and my underwater octopus princess game are booked out - my long stairs one struggling leaving me with holes in my days. I might be able to sit in my friends Cthulhu Van Diemens land game - escaped Tasmanian convicts on the run with nowhere to really go to. Presumably monsters will eat us. I'm kinda Impressed camp cute game did so much better than my gun mad macho game. I might try and play a watership down dungeon on last day before dinner get together.

I have 3 days off to prepare. This is money I made to be used as props/give away treat. Also stickers as I am a born again vandal.

This is more of my design and stickers and zine stuff here for my fake evil corporation: https://www.flickr.com/photos/konsumterra/sets/72157602941784866/
Found cyberpunk setting based on film/book http://www.paper-dragon.com/2026/toc.html
Wish i had found earlier - some nice links and background tables

Some tech not really advanced and has stood still other than a few mad geniuses. Guns and cars have not progressed much from 1929 -2020.  Robotics is just about to break out.

Transport
Cars ot really more advanced but some electric models about that are quieter and more subcompact models. Lots of streamlined deco wet dream futuristic looking cars and planes would fit in fin. Autogyros with short landing and take off are common and can and on buildings easily. Some compact 'gyros with folding wings available. Aircraft much more common and pilot skills far more common. Air trafic directed by electroncs, light beacons and even police.

Rockets are huge best lifted from pre war or perhaps Werner Von Braun or pulp magazines designs. The type in Flash gordon are good too for many uses. Apparently not much harder than a regular aircraft.

While not used in my sources much huge intercontinental air ships are comon for a more leasurly safer trip and good for cargo and exploration. Rigid hulls of high tech materials mean they can withstand artillery if military and compartmentalised non flammable gas make them hard to destroy. Aircraft carrier airships also common.

Huge bombers and paratrooper transports and use of gas and germ bombs made war very deadly. Generally causes outrage even from own population. Wings over the World us sleeping gas for more palatable conquest. Art deco tanks and APC's are employed, all smooth and streamlined rather than riveted boxes. Submarines common also for international trade an war. Large ships and subs and airships use safe clean radium powered engines.

Rotor or jet packs used by fringe science to fly or at least land from a height. 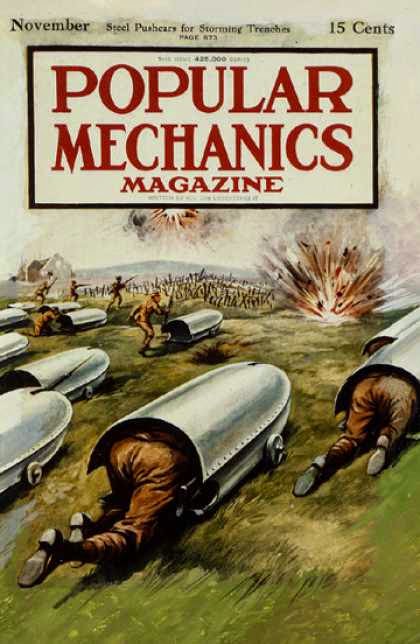 Firearms & Personal Protection
Most guns have nt changed and firearms less common on the whole. Automatic weapons almost non existent outside of military.

An American military handgun a 20 shot .45 with a built in flash light is getting rave reviews and explorers and space programs are using the boxy looking gun. Some streamlined compact silent guns and streamlined boxy looking SMGs are used by spies and sabotuers. Electric detonated guns growing in popularity but dont perform any better but are caseless with no ejection ports.

Rocket or gyrojet guns have heavy ammo, wide choice of payloads (gas, AP, incendiary,explosive, entangling, electric stunner, heat seeking, electric seeking) ammo costly, quieter. Less shots and not effective at point blank range. They are used by space programs and perform in vacuum, low gravity and are good against heavy armour used by some elite troops or robots or vehicles. Some spies ahve been found with wrist rocket launcers with 3 or 4 shots. Most ammo damages equivalent of 45 magnum. Brits have a six shot version with selectable ammo letting you choose which type of ammo. A bit bulky but working on voice activated model. Flare ammo and basic gun is most common version. Rocket propelled spearguns for underwater are common diving gear. Aquatic versions of other ammo cost double.

Some electric guns experimented with including a needle tranquilizer propelled by magnets, an electric stunner and a large deadly lightning gun is being experimented with but not usable for mass production. Mad scientists and space programs have used.

Pnumatic and electric needle guns rare but mostly by spies.
Gasmasks used by police, army and in shelters, few legitimate persons would carry one
Belt that controls temperature 7lb/3kg, better on boiler suit

Mechanized "Ironclad" armour plate turns a man into a living robot and has been tested for officers or robotic corps but still very experimental. Underwater versions for deep sea exploration are used by civilians. If anyone ever dives a giant clam or octopus should attack no matter where water body. Any jungle river has piranha too.

Light 20 AP like ballistic full plate but mechanized 144lb/60kg 6 hour battery 2hr oxygen
Takes 20 minutes to put on by yourself or 10 with a helper, use STR raised to 16

Heavy 30 AP 330lb/150kg 4 hour battery or 12 hour radium battery, 4hr oxygen
Takes 30 minutes to put on with 2 helpers and to start engine, users usually locked inside
use STR raised to 21

With advent of armour mechanized saw blade daggers and swords +1d6 damage and a 10 minute battery have been developed. Versions for mechanized armour troops powered by suit instead. Electric batons, gauntlets and swords keyed for damage or stunning have been used even by police. Stunners effective vs non military robots.

Acoustic and ray weapons mostly in hands of odd mad scientist or experimental. Space programs might use but mostly secret. Bell shaped acoustic stunners are ones public most heard of for riot control.

Mines and claymore weapons are common but alsu use non lethal chemichal webbing or gas. Magnetic mines for tanks and structures need to resist 30STR to remove 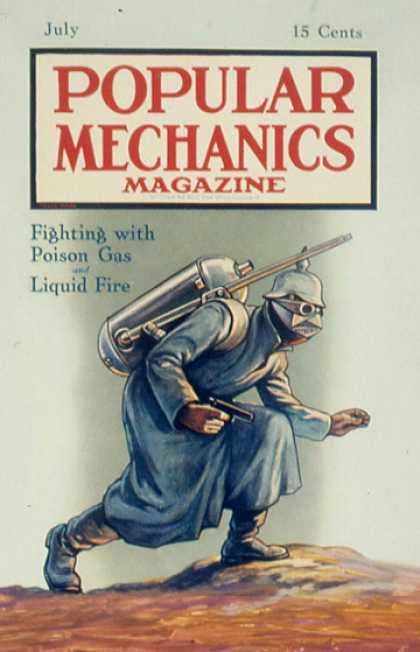 Cognitive thinking engines are rare, with talking ones even more rare.

Radio printers and scanners transmit and copy documents and print daily newspapers.
Television phones in home in booths, some even on wrist for tech fringe.
Radar ovens cook food fast.

Cyberwear is rare but possible

Robots just being experimented with most automatons.
Thinking talking ones are rare and mostly custom built
RUR Rossums universal robotics have made Poland rich. Many versions from dumb automaton worker and Iron Joe soldier, talking and non talking servant production models.
RUR also have a chemical synthetic organic model with metal exoskeleton painfully too human. Can be made totally human but company avoided this as caused ethical problems with consumers. 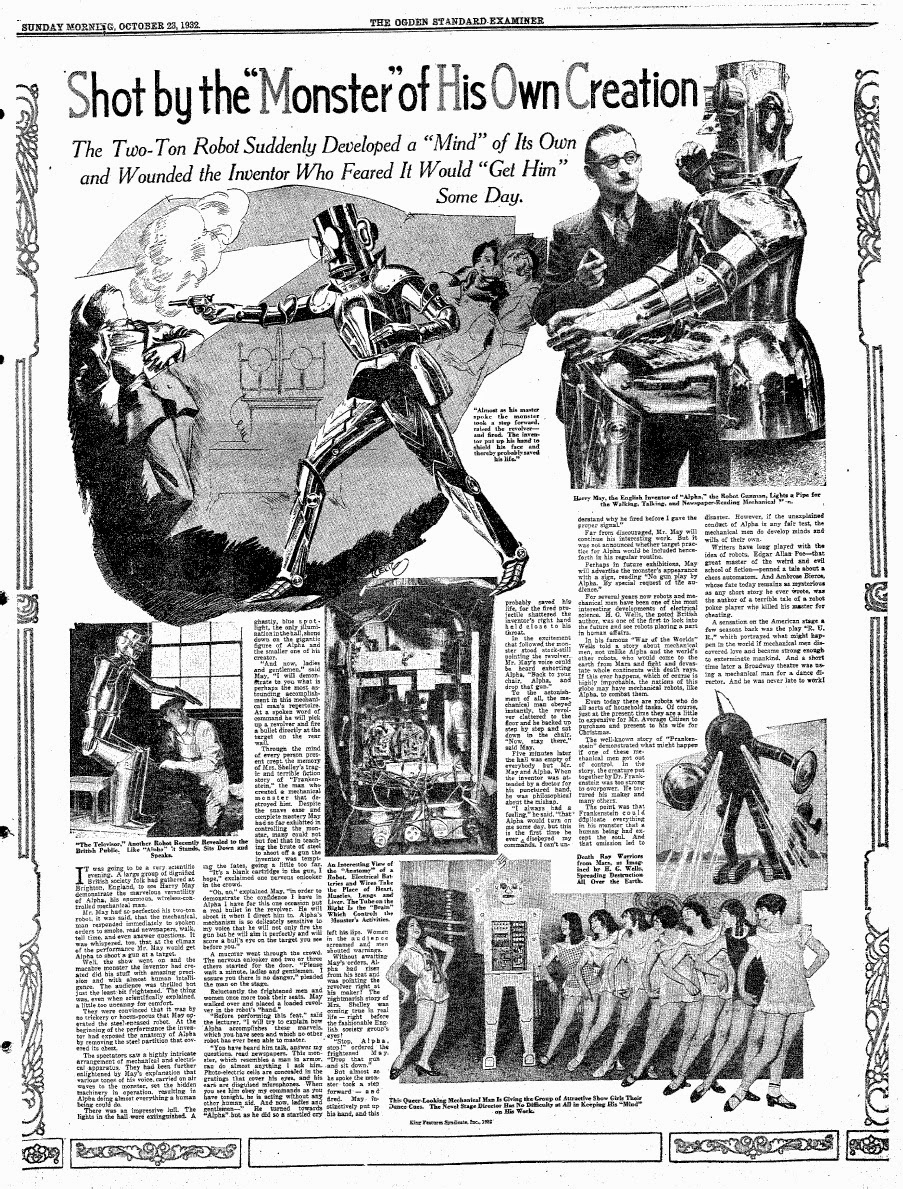 Most of the world labour is cheap. Africa has thriving use of a breed of newt discovered that can be trained as slaves and very good underwater builders even in salt water. Only 4 foot tall. A priest claims to have taught some to prey and that they have souls but clearly they are just aping human masters.

Includes vests that shoot up to 8 smgs when raise arms in surrender position
http://www.cracked.com/article_19943_the-9-most-hilariously-irresponsible-old-timey-weapons.html
Not as silly as article presents - tommygun brace on motorbike is awesome

must read for any sf project
http://www.projectrho.com/public_html/rocket/

Trying to knock up some paintings too as client getting shitty
Posted by Konsumterra at Tuesday, April 15, 2014