OSR DnD Settings: Why I Made Exile Island 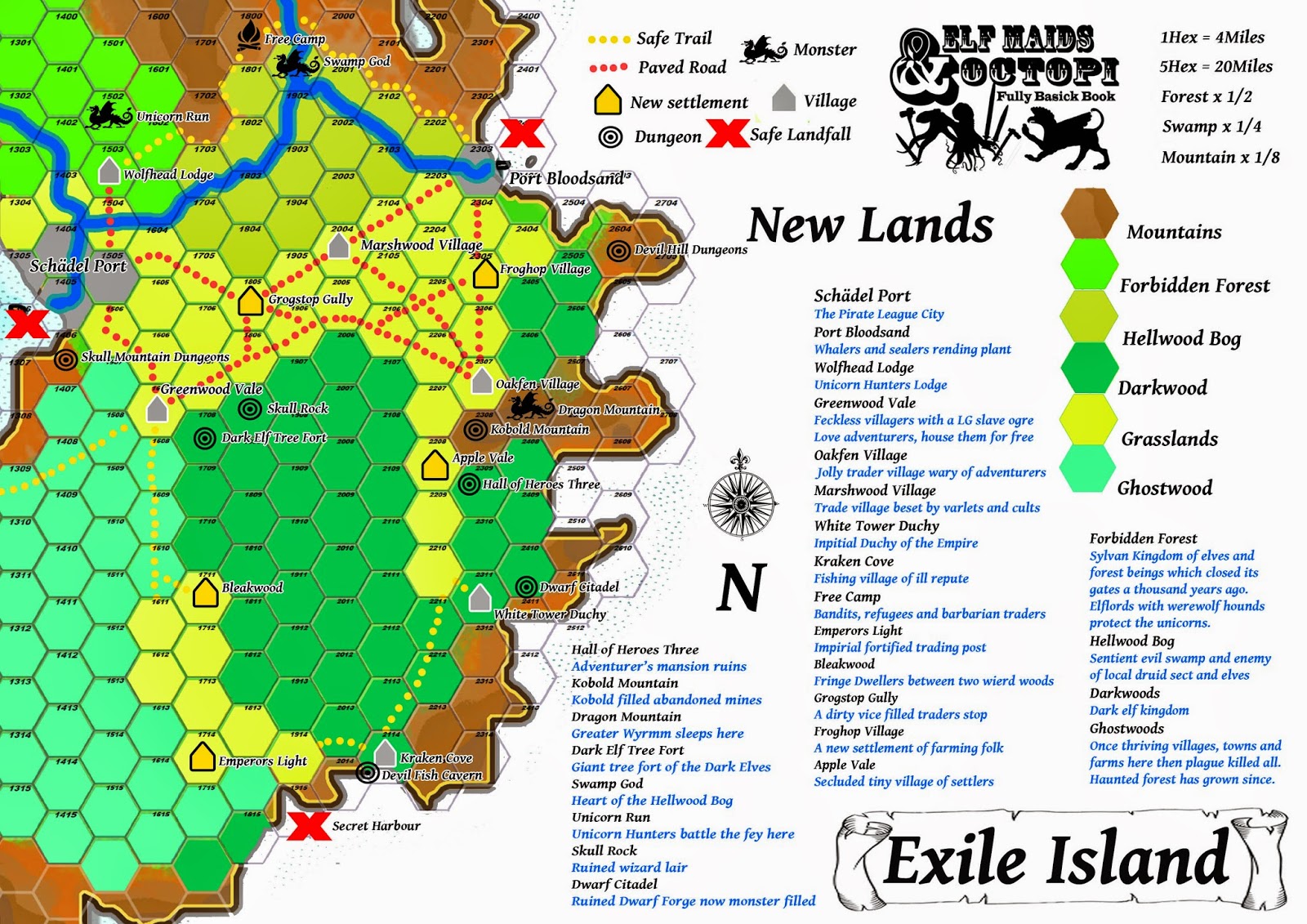 Update from last year to show what new settlers have done over 2 campaigns - more on this after the OSR cliche sausage fight bit. Im starting to layout some books for editing at last.

I find all licensed setting a risk - starwars, marvel, krynn, FR, Glorantha
Author free to DM over you and change cannon every edition not = good
Too many cooks or Safety in numbers both flawed too
The Meta DM trying to block my DMing style and make his characters best is lame
I prefer the non-cannonical approach and prefer the early DIY settings

My favorite settings are very complex and this is intimidating
I was threatened by Tolkien and Star Trek games as stronger fans than me were nit picking and Forgotten realms has become this. I would try Trek and Tolkien now but still just id rather do my own thing. I play Marvel not with any recognized heroes too. I like Tukemal and Glorantha and was intimidated by it for many years before i could run it from very good adventures and setting material So much stuff has come in Glorantha and system changes to RQ i feel like this again.

Historic games are among my favorite because so much more meaningful than something made for  bunch of fans for profit. I like national geographic and libraries and PDFs for almost free for supplements. If I know about history I can talk about it related to everyday life and people might think im clever. If I talk about klingons and orcs I would be dismissed by plenty out of hand. I find it challenging and a bit intimidating but even if im wrong it is all part of something bigger. People accept alt history better than alt Tolkien or alt hello kitty 40K or Star Trek. You can always do better and dont have to pay for privilege of being wrong or dated or trapped in an edition so much. Gurps books were awesome for this, old Rolemaster even those green 2nd Ed ADnD books were good fun. Cthulhu was game got me researching real history for gaming. Even 20s trivia is useful. What the hell a Dritzt is I actually dont know.

Ive had many big worlds but have played for 5 years on one island with one horrible city - and multiple dungeons per 4 mile hex. Bigger worlds had different story. Azaerth setting (some company probably used same name used since 1988) was about visiting a kingdom, locate what evil god is up to babess in cosmic plot here then stop and try to get king to join the alliance. Island game about how not to fall in a dungeon and get trapped but live to sell scraps off other dead adventurers.

My Exile Island Setting started with party washed ashore of big mountinos Island thic with ruins and wilderness, some frontier that moves every year, some ever expanding villages and expanding common law and the city. The distant Empire has no map. It's mad young emperor has gone from youthful psychopath with godlike power in succession war to becoming a disciplined tyrant still exterminating other factions in civil war.

There are always refugees (a bit of an issue in Australia) needing new land
There are political and common criminals banished from the mainland
The Island has famed prehuman ruins and was part of a bigger continent lost in cataclysm
Geological layers feature diferent dungeon epochs of magic.
There are more dungeons, foreboding crypts, spooky abandoned houses, ruined temples and dark caves to hidden under lands than there are people on Island.

In recent years the Empire has put in a garrison and taken southern part of Island
The Evil Pirate Barron of the city has made peace with all non humans not just his goblinoid and orc allies. All non humans hate the Empire that drove them here thousands of years ago.

I made horses only for nobility or name level, death sentence to ride, all horse nomads are criminals. Demihumans exempt.

This keeps travel speed low. Most villages can be reached in a day pleasant walk though farm and grazing lands. Thick impassable forests and mountains limited by terrain and supernatural forces. Medowland encounters mostly nice but more isolated and woodland areas are hellish and unfriendly.

Every hex in plain has been visited. Mountains around Shadelport and above swamp have been explored lots with more dungeons than any party knows what to do with. State systematically claims dungeons and send in explorers, occasionally by force. Some dungeons or towers have notices from state declaring not to be opened on pain of death - reasons often classified. Kings of the world know artifacts from here the most potent and numerous.

Players mostly scared to leave safe roads and run home from a dungeon in a few hours than explore the wilderness. One 10th Lv party went far into mountains and carved out a small kingdom to north I will need to map. Still lots of the north to explore and the highland people are more numerous than thought. 13th Lv party went to invade monster island with a colony but I never got them to hell. I might have to do a one shot where they do - I could just let them all be 20th lv a few years later.

Farmers often ex military and well protected by law. The Yeomen around city protected by the Barron. But they are very tough and undefeated. Everyone here respects food producers and leave them be. Occasionally tribal humanoids kill some farmers and hunted into some subterranean hell hole. Non humans are not friendly and Bright elves kill people more than the Dark elves (they kill your family and make them zomie dancers and then charm you for fun). Dwarves resent men and orcs for robbing them of gold and technology. The Barron and the Empire protect elves now. Both want dark or bright elves onside. The scariest thing about elves is their king and queen are gods. Most think bright and dark elves have different king and queen but actually they are same beings with many bodies and forms.

Players know map very intimately after this time or the bit illustrated here anyhow. Marshwood was a village of squalor and vice being corrupted by scum and a serpent demon cult. Now it is clean and friendly to lizard men. All the scum now in Grogstop Gulley where seedy merchants and crooks and orcs go. Bloodsand is so horrible nobody in years has ever gone there but a Druid plotted to destroy it. 95% male scum rejected by city and chopping up and rendering animals (whales, sealions, penguins, seagulls) for oil and meat. I will do a table for it one day. Shadelport is much nicer and has some charm among the vomit and poison caltrops.

Hex 2604 Devil Mountain Dungeons had players buried in lowest level in a few hours. A whole under land kingdom with months before they escaped. Halfling reluctant to return but knows he must. Im sure they will get back again.

Hex 1406 Dungeon Delves of the Skull mountains. Many dungeons mazes here and many ruined old houses, towers and castles on road way there. Dungeons are trashy redbrick types with mad wizards or tribal humanoids and evil high priests and a mausoleum of undead.

The city has a ruined section full of towers, crypts, tombs, temples, dungeons many with pasted government orders with explorers deeds available from city council. Island is dungeoneering mad. A gold rush economy ever present.

There are wilderness land masses besides the empire continent. There is a Eastern continent of conquering horse nomads, and he aged empires - drug addled Cthulhu cultists and another of dragon worshiping philosophers.

Some of my favorite game products

Theives World/Runequest3 Cities - explains alot about my taste
Gammaworld2nd Ed and Legion of Gold original - Gygax hexcrawl and mini adventure gold
Gammaworld has many scales of detail as example then gives you a world - Star Frontiers 2300 Traveller all gave a world but rigid (at least Impirium Huge).
Gurps Space was awesome DIY toolbox. I wish i had them all still Have Auotoduel, China still).
Swords of the Diamyo AD&D Oriental Adventures - classic hexcrawl TSR product
RQ3 Crucible of the hero wars setting box set was amazing - encounter examples painted a portrait of culture easy to emulate. Dorastor amazing. Griffin Island amazing (both versions)

I like most of old AD&D classic modules, Dragonlance probably last dnd modules I got
UK modules all interesting and great maps and weirdness

The Lost City - could play for whole year in here
The Hidden Shrine of Tamoachan - hellishly stylish kill machine
The Principalities of Glantri - you could stick this in centre of any world
Dwellers of the Forbidden City
Desert of Desolation as a whole, im a sucker for bronze age and nice maps
Against the Cult of the Reptile God classic horror village out to get you
Swords of the Daimyo hexcrawling fun
The Lost Caverns of Tsojcanth wilderness plus dungeon plus gygax craziness
Castle Amber Based on a favorite writer but i love the mad wizard family cursed by gods and house
The Sinister Secret of Saltmarsh Horror, fake ghosts, pirate smugglers, play this one as children might be fun

Honorable mention for Feast of Goblyns for adding detail to first Raveloft set and having lots of stuff in it. Adventure flawed, art very nice. I liked this version of Ravenloft - hammer horror smackdowns (yes it is still horror). Also for Tomb of lizard king I remember players being very unhappy when kings secret power revealed. Expedition to the Barrier Peaks for the crazy. Decent Series all horror elder race fun with depraved porn drow furniture and sexiness and drug abuse of evil elves - made my teen brain pop. Many of the Dungeon Crawl Classics adventures are really good - i find i steal stories and dont always use their maps. DnD known world Gazeteers and early forgotten realms region books good - the gods dying thing killed it for me like a DC comic reboot.

I liked Basic DnD world right up to when it became Mystara
I still like it but flying boats im pretty down on (ruined mummy film) sorry
Cthulhu 20s so mapped out i am enjoying other eras more even though a favorite
TSR putting lazy psuedo history into products made me a RQ history gamer for 10 years
I still like osprey military history books and wargamer look of 70s TSR
Unseen rooms make me sad in scripted dungeons and happens often
I admire Pathfinder art & design but it just does not look like my fantasy or aesthetic so probably not for me
Posted by Konsumterra at Wednesday, April 09, 2014