Viking Log: From Hyperborean Temple of Tsathogua to Court Of Norway's King 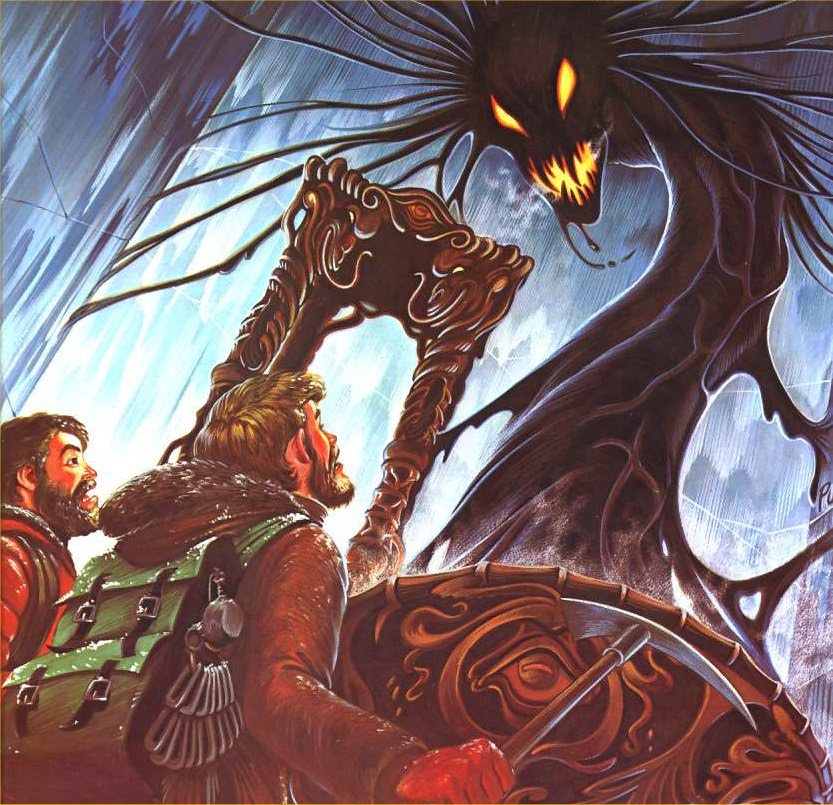 So the brave band entered the great stone temple in the mountains of Greenland. Hrafn barked at his Christian to look in the great bronze bowl and he approached, holding up his hand to ward them back. A great ropey tar like mass bubbled up into a fetid driping column of evil liquid.

All stood back and Johan began to vomit everywhere. The Christian fell in horror to the floor. The biengs eyes looked at the lead viking Hrafn and he heard it's gurgling fluid voice in his mind.

"Are you here to worship or are you enemies of Tsathogua here to rob him?"

"What treasure have you here for us to loot creature?", Replied Hrafn.

The ropey black liquid horror went to fall on the priest on the ground and the able vikings stuck it with no effect. Thorhadr blocked it from getting to the monk with his shield and dragged the monk back. Johan's huge wife grabbed him and dragged him back. Breidr plunges a torch into it and the demon screamed and the torch went out. Seeing blades do nothing the new Viking on the block, a modest quiet Dane hacked at tripod leg while others joined him. Some stood back to prey to their weapons while Thora's blessed arrows wounded the beast more than anything.

The tripod crashed and the beast pored over ground to attack Thora, bashing her. Rest charged but unable to get close enough to hir with blessed weapons (inflicting 1-2 points damage per blow). It chased Thora as she ran towards her cousins and drew her broadsword. She trird to block it and was outraged when it engulfed her and dragged her across floor away from others into the temple. It swallowed the christian to and charges across the room. Alrec performed a superhuman leap and swung at it and finaly the beast was killed by a few more blows. The formless spawn collaped into smoking acrid liquid and Thora alive but scarred with blisters and her weapons and clothes ruined. The christian had shredded cloth patches stuck to his burned flesh.

Found a glass bell, a metal bowl and a multicoloured ring that changed colour constantly, some even unrecognizable. Alrec played with bowl and waves of psychic terror radiated and he saw outre visions. The bell chime disturbed all but had no understandable function. The ring fired a stream of mucous that could harden. Items cursed but they took them. Scraped ice off walls and read story of Hyperborea and coming of humans who supplanted them. Found crypt of red furred ape man priest.

Left the cursed place and marched back to the strange village and their ship. Traded with natives and Hrafn bought a ugly woman with Hyperborean human blood in exchange for a sword. He turned down a pretty (ish) one with a viking parent.

Sailed home and spent res of year visiting holdings in Norway, Iceland and Briton. Most spent winter in Iceland. Thora went to King of Norway court to try to get party to notice Stonedale clan. She carried gifts to king from past raids including a gem encrusted box any king would like. A few babies born and oldest monk died (SAN 36 Mythos 31%) Spring Thorhadr invited with kin to entertain court with his songs and poems. He had a good rep as a scald now.

All joined the feast of king heartily singing, drinking and put on a great show but didnt get to talk to king. Throa suggested single clan chief cousins Alrec and Hrafn compete for the hand of kings sheild maiden who king offered a dowry of 3 ships. She demanded a man who could beat her and find a lost belt. Thorhadr gave a adequate performanc and his cousins joined in badly but kings drunk bard boasted he could do better then passed out making everyone laugh at him. Thorhadr succeeded by default and still has a chance.

That night Alrec still sober found a mad viking Axel the loon, searching their trunks. Axel politley asked what loon up to and got story that he had belt maiden was seeking but stolen and he had deduced only four unsearched halls could have it. Thorhadr and Johan searched next night during feasting and Thorhadr better at convincing guards he was drunk than sneaking. Finaly he distracted enough guards that Johan stole belt he found (that Hrafn had offered 5000 english pennies for). Meanwhile Alrec managed to get into fued with the maiden who found him boastful - he thought her an upity bitch. Hrafn worked poetic charm on her servants and got to speak with her and arrange a duel. Briedr asked for a fight later and she was impressed he only wanted to fight her and nothing else and was happily married.

Gave belt to the loon who gave to the maiden and she defeated him (a wiry Loki Beserker??? Why does king keep him around). He was grateful to party for aid and promised to aid them one day.

Next time Hrafn's love bout and meeting the King of Norway face to face.