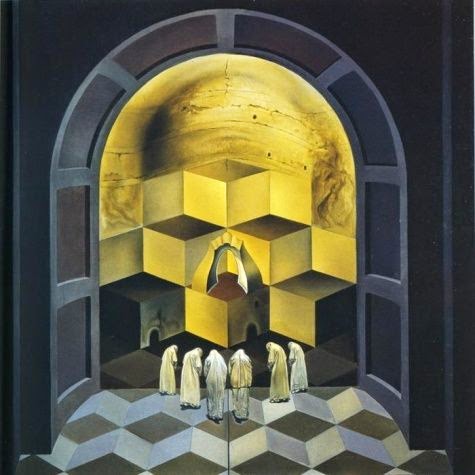 So halfling and lady necromancer with tag along followers of body guard , aprentice and pet raven. Halfling on lookout for new friend after last few died. New friend a bear spirit folk sorcerer. All went to tomb filled valleybut heard  crying child (?) from woods. Came across priest and followers about to eat a goat kid sacrifice. When they saw party invited the over. Apprentice noted they were not LE or CE cult as she is expert on these.Welcomed them with food explained they were Enlil cult looking for unlawful undead killing people in region. Agrred to join trek to vallet of tombs.

On way found a bridge. While crossing could smell a stink necromancer said was a rotten corpse. Bear spirit went to see invisibly and saw ghoul eating a man and dead horse.He called the gang over who killed it. Necromancer began to dissect corpse in middle of becoming a ghoul but bear man disrupted it with anti undead magic. Grumpiness ensued but Enlil priest urged all to move on.

Found a pub, with kitchen and stables. Inside were 3 patrons in hoods quietly in corner, stable hand who gasped at party skeleton horse cart, sad barmaid and friendly inkeeper. Were friendly but at one point inkeeper leaned over and asked with a wink the halfling and necromancer what cult they were in. Both a bit surprised. Said they would stay here for return trip and paid for a roast pig. A bit suspicious but moved on. Bar folk wary of Enlil gang but chummy to party.

Found a cremation ground and altar and moved into valley and found a cave. Went in and found secret door revealing another "empty" corridor. Necromancer pulled out leather case and let out kobold trapper. Told him to find traps and he carefully walked in. Deadfall of rubble crushed him to gristle. A bit sad but he did his job. Found next secret door and went into tomb to see skeletons attack. Pulled back in fighting formation and priest turned to find his power reduced somehow. Most fled but when they killed two that did not flee their swords animated - worse than skeletons. Destroyed them but priest fell back hurt. Bear moved in and fell in pit weighed to ignore skeletons. Impaled on spikes but crawled out with help of Enlil cult and healed by priest.

Drove rest to other wall and greedily opened crypt, out jumped bones assembled into skeletons riding skeleton wargs with wight leader in armour with a gold arm ring. Room so crowded could barely move and priest turned skeletons who tried to ride wargs away pinning wight in corner. Necromancer summoned a hoard of dead pinning more enemy dead against wall. Party battled for long time as turning wore off and wight killed by spells from bear and necromancer, her apprentice and familiar. Bear cast web trapping most of dead and heroes managed to destroy them all by depleting most spells and had a few scratches treated by Enlil priest. All relieved, robbed grave and noticed now they were cursed by valley. No idea how.

Went to pub and drak lots and ate well. Tavern keeper offered all they could drink if he and friends could join them. Bear passed out drunk as did most Enlil cultists and priest. Halfling noted tavern guys not really drinking that much. Was wary. Helped drag Enlil gang into upstairs room with two still standing and went into own room. Bear morphed into a bear and slept in front of door.

In night none heard cultists and ghouls creeping about. Cultist tried opening door and woke up bear who saw cultists. Apprentice anf bodyguard woke up rest. Hearing noise next door bear ran through wall and came across ghoul killing sober Enlil agents and then fall on drunks. Bear and halfling killed two ghouls while bodyguard held door and necromancer filled corridor with summoned skeletons. Heroes managed to kill all and sad priest of Enlil swore vengeance on his dead followers. Smashed in their skulls to prevent becoming ghouls. Killed three robed zombies in bar downstairs and captured charmed barmaid. Priest tied her up and dragged into bushes outside. Party killed zombie cook and stableboy. Bear vomited realizing a ghoul had cooked dinner.

Down in well stocked cellar found gate where innkeeper and stable hand threatened them. A summoned hoard of dead tore them apart and charged down hall behind them. Two rutterkin demons awaited furious at operation being destroyed. While undead attacked they summoned a fly demon for help whose horrid drone sent bear to sleep. Freaking out the priest cast silence on the fly. Undead and heroes hammered away till a rutterkin was killed and fly teleported away. Priest caught in polearm with man catcher and managed to keep himself together to cast a heal on himself. Last demon teleported. Grabbed their evil magic weapons (mancatcher and polearm) and treasure and souls in form of horrid egg sacks. Escaped before gate fell. A hearty pile of cash, deed for hotel, a evil larvae creature and four strength potions.

Priest took souls and larvae and girl as his share and left. Rest reveled in new loot and new property. A good base for rest of valley.

Several times party convinced they would die which is always good in a game.
Posted by Konsumterra at Tuesday, April 15, 2014