Exilelog: Scum floats to the top in sewers of Shadelport 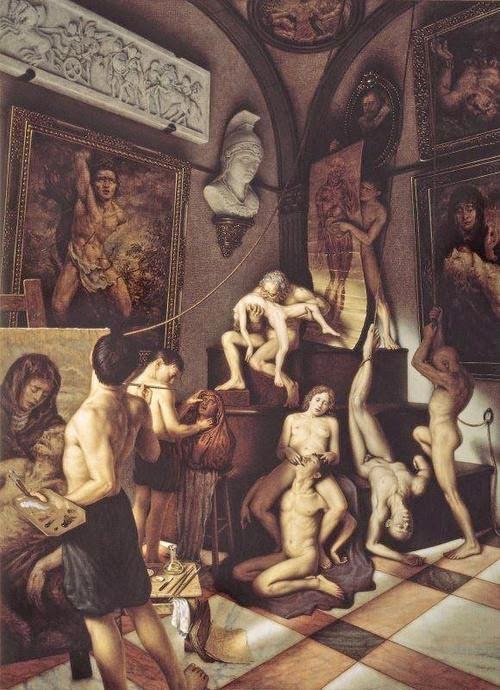 So over last few sessions the greedy and often awful anti heroes went about business as usual. Selling beer with orc heads and formaldehyde, encouraging local gang with free grog, selling rat on a stick and sexual favours from the people they have rescued and press ganged into party service.

Went to check out illusion shrouded tower Necromancer purchased sight unseen. Went through many tests, fought a monster and met wizard who paid them for deed. Third time this happened in 200 years. He did offer to pay them to empty local cliff tombs full of undead and attract nosey adventurers.

Went back to city where halfling decided to do something about cult after his tattoo. Got dark elf to give free cult tattoos and half price beer to any halfling customers in party bar. Hope to be a distraction. Chaos priest asked grandpa about cult. One of top ten most wanted with three chapters in city. Apparently halfling tattoo will let them open another gate/mouth of the god to found a new temple. His surgery protected him to date but hopes his parents might be alive still.

So into the sewers. Battled some monsters and undead and albino lizard men degenerates. Necromancer used up spells then wanted to go home. Halfling and Chaos priest with crow man servant went back to area of sewer  temple.

Heard voices and were ambushed by gremlins riding giant rats. Sneaky and painful but easily driven off. Dreadnor the raven fell and gremlins tried to snatch his eyes but others beat them away and priest healed the raven lad. Found square sewerage filled room with many drains and cult sigil on door. A circle with curved teeth just like tattoo. Cult worship pits that are really gateways and mouths of demon god. Told Dreadnor to probe with a spear through stinking slop and a sewer constrictor attacked. Dreadnor was being crushed and twice his master accidentally stabbed him killing poor lad. Snake got away and halfling contemplated selling his corpse or making a hat from his skull.

Smashed in doorway and next one had two statues of cult assasins with sabres by door. Of course they attacked and the lads killed them. Inside was a filthy square antechamber with mosaic of cult sigil on floor and 4 doors. Chose on and went into priest sacred wash room with bath of foul chaos polluted unholy water. Chaos priest saw it had a water weird so so went through his collection of holy and unholy relics and tossed holy water in bath killing monster.

Art showing priests leading sacrifices to throw in pit in corridor and party crept up to curtain. Four more tainted wells and the plate sealed pit awaited and a evil priest. Chaos priest cast hold person and lifted lid of pit to throw cultist in to god. In burst four priests who cast some spells paralysing the halfling. Chaos priest commanded water weirds to attack (turn/command elemental s never used before). He managed to hold another with a charm before they hit him with a silence spell. With the water weirds at his command he beat and drowned three before last fled but halfling revived and water weirds finished him while evil high priest fled. Chucked all in monster pit.

No closer to solving mystery of cult but the sect probably interested in halfling now. Went back to looking for property to claim under city law. Found house near by with stories of gibbering and hooting.

Found dead hobos inside and sealed room upstairs they bashed open. A hobo explained he was safe by night locked in room and climbed through room if he needed to. Offered him job in rat trade and made him sign a document to say he was agent of party and had occupied property for months. Gave neighbours free beer to sign witnessing forms with Chaos priest (a qualified judge recognised for justice of the peace type contracts and weddings) to officiate documents. Old bert new man servant offered a free beer every week, a place to stay in former ghoul house and a free at on a stick daily plus money for a bath and new peasant smock. Sent him away and awaited the gibbering creatures to come from basement.

After spells of priest regained had dinner (rat of course) then waited. Something sniffing about so they opened door partly then wedges partly open limiting access. Gibbering horde poured up from cellar. Half orc half ape screaming creatures spooked Halfling who fled out window. Chaos priest in glowing magic aurora with a magic sword he swapped for cult flail taken from priests. Also summoned two dust devils and for first few rounds the three got to attack any who came through door. Went well and halfling eventually climbed back up after hurting his bum in a failed climb attempt. Gibberling horde smashed door down and killed twenty more of hoard and dust devils died. Continued till 38 dead and two paralysed by priest spell. Found nest below with  infants a map of an island and a evil dagger that heals 1hp if a lawful good person sacrificed. Gave funny feelings so priest gave to temple of chaos who offered them scrolls and credit.

Kept gibberligs as chaos temple said fast breeding gibberlings loved by chaos temples as guards. Had a breeding pair and they mature very fast. Wagon load of corpses sold to goblin butcher by Bert and pile of goblin swords. Bert was given cut but they took all costs estimated for his upkeep away.