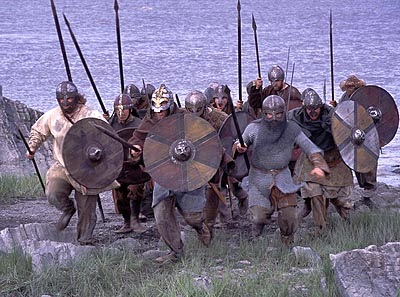 So i forgot swim skill and spelled shield wrong on character sheet so another revision.

So the stranded mastless ship beached ashore while captain, ship elites and party marched to the stockade. Hrafn noticed fishing boats nets and tackle and line missing from boats. Entered the empty stockade and warriors feigning nervousness approached. Leader with his dog and the captain Hrodar spoke jestingly till party heard commotion from the long ship. Fight broke out and the dog was masking illusion of a gigantic man, surely part giant. A spirit appeared making the terrified captain flee, ruining his credibility forever.

Vikings were devastated in first few bouts, with elite beserkers being killed. Several were rapped in nets in the gateway, Breidr cut his way out and helped others. Thora shot at the net wielders in the walls. Brothers Alrek and Hrafn broke through lines, flanking the half giant and hacking off his leg. The enemy were shocked and the tide turned. The brothers attacked the leader and his wizard, capturing them both. The last vikings managed to kill the last enemies and shut gate as a horde of archers who had attacked the boat guards came up hill to reinforce the fort defenders. Insteadthey found gates shgut and Thora killed two dead with arrows routing the rabble archers. Found men at boat dead and tied up including Thora's sister Throa.

Found a fortune in the fort treasury. Fixed the ship and took slaves from the foes and their prison stockade. Fixed the ship and rested a week. Sacrificed the enemy leader to Odin and killed the wizard who made the illusions in battle. Sailed back to red Fjiord and were paid out.

Party involved in murder at ship launch feast paid out the family. Boght a new family hall, a herd of goats and put down payment on a ship. Spent year working on farm. Some searched for brides and Alrek turned down many offers angering many local fathers with his refusals. Gossips spread rumours of his preference of male company. He spurned the rich widow and told his friends they should try wooing her. Briedr considered it but wanted a young bride and was considering best offer of goats in a dowry he could get. Hrafn the plainer of the group tried to visit her and while not encouraged was not spurned either. She was richer than the whole clan and he did get to sleep with her.

Thora studies under priestesses ways of Freya yet received signs of favour from Odin. She refused a powerful fat old odin worshiper from another town who heard of her beauty.

Thorhaddr hung out with skalds and learned some new songs. Hinted he might learn secret song techniques to inspire men in battle. He investigated the wolf attacks in area they battled wolve in four years earlier and the black wolf had harmed many more.

Party went to wolf hunting grounds and Thorhaddr found locals reluctant to speak of matter. Hrafn spoke to a man who had paid off a outlaw father and his two sons to keep wolves away and it had worked.

So party feasted under hospitality of farmers. The farmer was not impressed to have a bunch of grrdy louts arive by surprise for food but they brought mead and herrings so he softened. He also had daughters he could marry off.

Wolf howls disturbed celebration of yule and men readied themselves hiding about the hall. Two groups of wolves spotted. One Alrek, Hrafn and Thorhaddr met and killed many. Thora shot one of the three largest attacking house and only scratched him with blessed arrows. That wolf came after her and tried to jump on room. After failing and getting several more hits heran to aid wolves cut down by heroes.

Thora warned others that wolves couldn't be harmed but remembered her sisters crude iron mace had hurt the black one once driving him off. Mistakenly assumed was blunt but realized cold iron the real weakness.

Breidr was fighting black wolf while other grey was breaking down door and went through. Briedr jumped over the wolf into the hall and grabbed a fire poker and dashed out wolfs brains. It transformed into a man naked except for a wolf pelt cloak. Black wolf howled and turned semi human scratching several vikings but unable to hurt them through their armour. Wolf scratched by Thora's blessed arrows ran to his father and was chased inside hall. Now the vikings were armed with cold iron farm tools they battered the werewolves to death. The father cheered and offered handsome Briedr more goats in his daughters dowry but he said he as going to wait.

Thorhaddr the lame wrote a good poem that spread far and wide.

Hrafn married the rich widow making him richest in the clan and inheriting several surly teens.

Ship ready, everyone now 20 and ready to invade somewhere.

GLORY !! the luster of gold and pretty baubles will fade with time but glory in the epics of the bards will live on forever !!!

I misread as pretty babies first doh!
Posted by Konsumterra at Tuesday, March 04, 2014