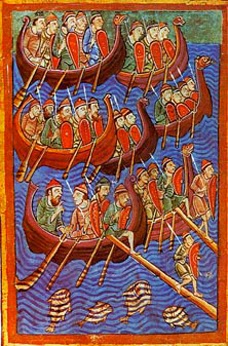 Breidr the Dauntless, a handsome farmer lad - now clan head of farmlands
Thorhaddr the lame, a clumsy unlucky boy training to be a poet - now growing fame as a bard
Alrek the Unruly a strong, handsome and outspoken hunter - now chief of the Clan
Hrafn his quieter brother (player away but in the shadows) - working on being a weewolf beserker of Odin
Throa Wartooth toughest girl for miles - Unwed mother and wealthy craftwoman and warrior
and Thora the Red her sister, been learning the secrets of Freya - the party magician, healerarcher, matchmaker and holy person
Johan a new young clansman out for a good time - is one of flashiest in the clan and lives like a rich man

Getting into being rich and privy to secrets of magic now they are not nobody teenagers.

The viking crew set off with a family, a wooden hall, ten goats for the Iceland colony of their clan. Freedom of new land and room versus the backward rural clans of Iceland. Iceland has monster haunted wilderness. Back home grudges and legal battle dog a viking at every turn.

So ship went well, Alrek shouting orders and Johan a good navigator and helmsman. Rest of party good at boating and rowing but crappy at climbing and swimming. Several ho the most heroic of crew married into Stonedale Clan. Captain is pleased at crew progress and Alrek's ability as a commander. Several party members plan to move to Iceland but those with Rich widowers for wives more reluctant. One demanded a fine house for core family members. Thorhaddr the only viking with a pretty young wife was first to volunteer to move. Has heard of Icelandic poets being of good reputation and the best export.

Alrek has made serious commitment to Thor and learning spirit magic of the cult and has begun to practice leaping over shield walls and men. Briedr has begun to learn a charm to protect his brothers. Thorhaddr learned a new magic song that makes all at a feast chummy for a day and has made several public critical performances. People who had not seen him for year or more remarked his poetry and stories and speeches are glorious. Alrek and Hrafn being poets and speakers too. Alrek an passioned leader of men and fine singer, Hrafn a good poet and able persuader of men. Hrafn wants flashy noble quality weapons and exotic bigger weapons. Party have been in mostly rural and backward places and never to a big Viking home and settlement so no go so far. Thora going mad from the things she can see but other cannot with her second sight but always has time for matchmaking. Now married with merchant husband and has commissioned him a boat. Throa Has been caring for her child she produced by sleeping with her thralls. With her famous cousins, her fearsome reputation she is left alone by suitors. Has been studying artisan and rune master secrets.

Thorhaddr has been learning read Latin from his Irish monk thrall but party burned all the Cthulhu cult holy books. Party as high status and fame yet they are still rich bumpkins. Famous as warriors, successful business men, marrying rich widows and for being of poor origins and youth. Surely they should visit somewhere flashier than local Jarls one day.

So arived at Chief Ketil's hold and were advised on lotions to move. Chose area to search that was not heavily settled. Set sale after impressing Kettil they are good guys then explored around Peninsula. Found a good site near some clifts, then saw a farmhouse but went on to a big stead of six buildings where a clan chief resided.  Alrek not savy about stuff outside of farming, sailing and killing but Thorhaddr a good adviser for his religious duties and conduct. Thora visited several steads along coast and treated medical problems of the old and lame. Heard of a big elf filled rock and visited but shy elves avoided large fierce party but Thora wished to return. Told by local area vikings are scouting is haunted by a bestial cave troll from the cliffs. Party  heard of those who came back from hunting Troll in his own domain. Vikings sailed to cliffs and best climbers got up cliffs and hauled up others and armour. Found the huge troll and managed to kill the brute ambushing him in his cave.

They built their house and fences for the first family settled in (Finn and his stonedale bride, her grandfather and her two younger siblings, plus another young couple). So after heard over mountains was a lake in a river they decided to visit. Found old shack with paranoid lonley poor old man whos family was eaten by lake serpent. Party went to ruined shack by shore of lake and inside was a great nest of straw. Thorhaddr stuck the heap with his sword and awoke the beast. A worm big enough to eat an ox and almost invulnerable. It hosed building with poison gas, with Hrafn copping a stinging gulp and Thorhaddr falling, foaming at the mouth and eyes bulging. Party laid into beast and it damaged several shields before it smashed through rotten wall and dived into lake. Party hung around a week while Thorhaddr nursed from near death by Thora. Hrafn tried using a goat as bait but monster too smart to fight party again.

Returned to the new farm steak, helped clear forest a bit and set off home to get next boatload. On the way a storm came. An unnatural terrible storm that threaten to destroy the ship. Several men hurt cutting down sail and mast that ended up breaking as a two and a half day storm herded them north. Thora with second sight saw a giant in the sky and it fired a lightning bolt from the clouds. She snapped and crawled under deck and rest tied selves to boat. Several got bad chills. Sea calmed and surrounded by fog. Thora treated the sick including herself. Her shattered mind made her fearful of supernatural everywhere. Several crewmen watching, saw shape in fog and readied bows. Winged men swooped down to grab the captain and three crew men killed incoming bird men dead and a few others lost use of their legs. Captain ducked and winged men driven off (breaking the scripted scenario called for capture). Party waited and later a run carved stick dropped from sky. Was a message claiming to be a different tribe who needed to talk. Party met them and pretty lithe young winged folk and a elder met them. Language was meaningless so runes were used even though they had some runes of their own unfamiliar to Thora.

Taken to their Island and traded irory, got some bird folk drunk and tried to seduce drunk women and failed. Made good deals and hard or great red shaggy troll beasts they used to hunt (mammoths). Set of with oars to enemy island. Party told they had taken several humans for sacrifice to the Jotun and some of the friendly tribes folk. Vikings keen to kill annoying bird folk and arrived at Island. Thora saw magical sparkles and wary. As the beached the boat and good wind warriors covered them from air and drove evil ones into their cave. Then someone saw huge sea serpent arise and gleam at the boat. Alek ordered men to keep dragging inland while heroes attacked the dread beast.

Several heroic wounds on the beast and a man eaten. The three poor fisher brother of the crew were on knees chanting in strange language. Which seemed odd. Thora realized they worshiped the great serpent! One of the three was swallowed and party hurt enough that it went to escape. They crippled its tail and dragged it back on land while heroes hacked its head off. Captain a impressive warrior inflicted several critical blows. Alrek had brilliant idea and slit beast open for two men it swallowed. Thora saved the creepy fisherman instead of the other hero she liked more but oh well.

Into cave they spotted several traps and disarmed them including a log they could use as a mast (do people carry spare masts?) One trap was a horrid life draining spirit which too Johan even thogh Thora tried to get taken instead, then cowered in terror instead. Dragged outside and the good winged man shaman saved him at cost of his own life. Thora a bit cut up about her sanity. A room ahead she saw ghosts awaiting and four sky folk let ghosts posses them while heroes poured in. Were ambushed at a steep slope but Johan climbed up quickly and Alrek leaped up with an amazing jump. Ambushers wounded. Party took on physical threats and the wind children sacrificed selves to the supernatural threats. Finally entered the great chamber and a huge aerial battle broke out with wind children. A sacrificial cage with sacrifices on a fulcrum neas a volcanic vent was ready to be dropped in so half vikings moved cage an captain cut open the cage. Alrek and Hrafn jumped up and killed many low flying evil winged men. Finally the ground was covered in limping wounded wing folk and Hrafn went into a kill frenzy. Thora tried to save some thinking them slaves but tearful good ones pleaded don't. Killed all the wicked giant worshipers and the good ones looted the treasure trinkets handing them to party. Ivory, furs and a magic necklaces. Thora grabbed them and party wary. She screamed at a magic blanket as demon ridden so they threw in volcano with the Surtur cultists corpses. Freed the four vikings and two Irish monks taken as prisoners. The lead viking told them to take the Irish as Thralls and offered them a reward if they took him home. He seemed noble.

Another party with the wind children and three vikings managed to find lovers (I will roll for offspring later). Party left to Norway and returned the leader Viking. He was a Jarl who offered them friendship and gifts. Hrafn got Ankle biter a huge bastard sword thay cuts off men's leggs and is stronger than most blades. Alrek got a composite bow from Russia. Scowled an Thora who had grabbed all the magic before.Turned out the blanket had 3 wind elementals inside a priceless relic now destroyed because of her reaction. Johan took a strength enhancing belt and Thorhaddr got a gold chalice with unicorn ivory.

Back home the party rested then made two more trips. Some party stayed in Iceland others preferred home. Rich widows harder to impress but Hrafns wife, the richest woman in the Fjiord died in Childbirth leaving him  with an infant and three adopted children and a fortune. He regretted not marrying her sooner. Rich but has family obligations. Her ex husband and Father of three kids wants a honour fight next thing. Thora had a child too. All party now more interested in religion. Hrafn learned arts of being a werewolf and fanatic fighter and instructed about Rune magic. Others picked up a bit more magic but Thora spent time in holy retreat getting over her insanity and recovering from her shock. Jotun joining sea god cult.

Next session will visit court of Norway. Hear tales of horror, learn secret arts of magic and possibly new missions. I could run them through Russia to Byzantium or Europe and Briton (or magical Canada). I have several Mythos plans and next episode of Ragvenar saga. LFP aventure i have is good too, easily convertible. Probably 2-8 sessions left before the raid on Relyeh.