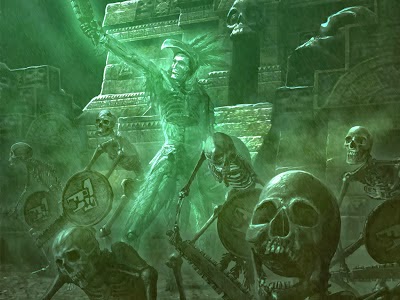 So the party ship of flashy treasure hunting sailors was in sight of Skeleton Beach. A man was waving excitedly on headland before it. Halfling with his crowman, Necromancer with her assistant and guard with Chaos Priest got in a jollyboat with 6 crew and 2nd mate. As got closer man was warning them away from beach to rough bit of rocky beach with choppy water. Halfling in his element as he is a sailor could make it. Landed and found cast away in tattered remains of clothes the Chaos Priest recognized from books in his grandparents time. Man was helpful and pleased to see them warning them about the cannibals and the undead of skeleton beach. Priest was wary so cast History spell and was blown away from shock of too much information. Man was an immortal, cursed by gods to lead a homeless life of struggle for his rudeness.

He did have habit of putting everyone down but seemed well intentioned. So party went to his house and heard his story but did not let on they knew his age. He did let it drop he knew the navigator who the party had robbed the grave of to find the treasure map. In morning went to beach and he told them dont do it. A pirate had left undead skeletons here for decades every time he left booty where x marked under beach six feet under. So as approached the dead rose so necromancer called forth more skeletons and zombies. Party tried to get to dig but huge fight escalated into chaos as fresh undead kept arising. After about 12 minutes fighting the necromancer was out of power and had summoned about 30 undead in battle. Chaos priest went deep into fight and was never harmed with all his protection spells. Alas he could not turn undead only elementals. Seventy one skeletons destroyed before party retreated. Next day did again with priestess from boat who could command dead to fight each other. A third sortie and undead depleted.

Got a few thousand loot and a minor necromancer relic worth about 10 000. Wary of taking cursed immortal with them so chaos priest blackjacked him and they put him in a barrel with caltrops. Starved him on way home.

Got on boat to head home and crew looked at them greedily so locked selves in room, refused all entry til home. Noted had sailed off course and crew tried blackmail. Necromancer threatened to cover ship in dead and torture their souls for eternity. The apologized and sailed to Shadel Port.

Once home and loot sold released immortal and talked. He was grateful but still kinda put them down. He claimed he had no idea why gods upset with him. So as he walked off, halfling hit him with a rock and stuffed him in a barrel with food and water, nailed it up and rolled it into the sea.

Necromancer went to buy a tower but heard there were cheap used ones. Bought one sight unseen for a few thousand and party went to visit. Into the forest beyond the farmlands and down a gully shrouded in mist found a thirteen story high tower with no doors or windows, some gargoyles and a gibbet. Looked at realty description - builder unknown 250 years ago. Took his kobold out from it's bag and set it off to find secret doors. Tapped with a stick and ony necromancer heard a wooden door. Could feel a door and lock but none could see it. Poked kobold finger in covered keyhole and he picked it open. An illusion of decrepit waterlog filth covered a pristine chamber.

Party fled to city to make plans and get flunkies.
Posted by Konsumterra at Tuesday, March 25, 2014