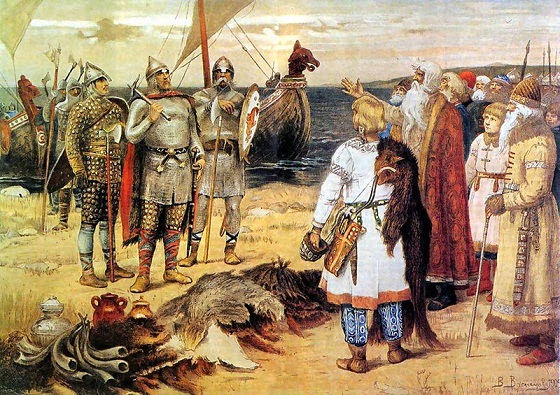 Breidr the Dauntless, a handsome farmer lad.
Thorhaddr the lame, a clumsy unlucky boy training to be a poet.
Alrek the Unruly a strong, handsome and outspoken hunter.
Hrafn his quieter brother (player away but in the shadows)
Throa Wartooth toughest girl for miles
and Thora the Red her sister been learning the secrets of Freya
Johan a new young clansman out for a good time

So the valiant boat owners set off again for a real raid, the veteran captain confident now he was curse free and wanted men to rob some isolated monks then join a bigger raid on a town. Hope to next year expand clan to Iceland and establish own territory.

So braved the sea and found a Island by luck with a isolated monastary. Pulled up ship and went up to open gates, monks totally surprised. Viking realized how weak these men with no women or children were. Frenzied well armoured warriors mad all out attacks and slaghtered monks with ease. In under an hour monastery burning, its sheep on spits and new thralls were tied up in boat ready for export. Grog, gold, slaves and sacrifices for all. Plenty of loot and so keen to go home but found imprisoned  mad in a flooded cell. Asked monks who said he was sick and insane and monks prayed for his sickness. Burned some book with a half monk fish tailed saint. On release he attacked Johan who struck him down and rest chopped him to bits. Had strange scaly skin patches and odd skeleton. They all shrugged and set sail, leaving burning monastery behind, Thorhaddr singing the victory song as the sun set.

All were warmly welcomed and Alrek was engaged to Jarls cousin a wealthy widow with a famous cow, a hall, herds and coffers of silver. Alrek was unconcerned about her apearance and rumours of his disinterest in women faded. The sisters helped find a pretty but poor maid for Thorhaddr and his parents were very keen. He wanted to wait but ended up wooing her in secret with poetry. Sisters found out and bullied him to marry. He said to test her will bring her next raid. Throa busy making iron knuckle dusters and busy working on craft. Family dont know what to do with her as men for miles fear her and she starting to consider uses for her thrall slave.

Hrafn has become more friendly to the beserker batchelors and is starting to learn secrets of unleashing the beast. Getting hang of battle frenzy. Wants better arms and armour but holed up in this backward fjord. Briedr spending time on clan farm and with rich wife. Thora devoted time to religion and seeking a mate.

Slaves sold were better value than the loot. But family very keen on getting more. Rival families very jealous.

As prepared to leave a cousin came reporting a monster in the hills that has dismembered six persons. Posibly a bear but hiked to hills and found abandoned steed was hearth of the murder victim locations. Huge lumpy footprints around area led to pit opening into a chamber of looses earth and offal and bones. Johan crept in with Alrek with bow and Hrafn with axe. Thora dropped behind with her bow, Thorhaddr was  above with spear and Troa felt a bit left behind. A rotten giant draur erupted under them and Johan stabbed it and tumbled into cave. Arrows bounced of it's purple flesh and chainmail as did most sword and axe blows. Thorhaddr stabbed it from above dropping his spear by accident into the pit, Alrek dropped the bow and went for his axe and his brother and Johun pounded it giving only scratches. It clumsily kept turning to hit everyone almost breaching sheild and armour and downing Alrek and Hrafn with leg wounds. Throa jumped in and while did no special hits did take several before falling. Finaly Thorhaddr the lame ran a new spear into its shoulder while Joha on his back ran another through its thigh, both slew it. All very stunned at foe so hard to hurt and deadly but gave them a feel for how monks were against them.

Set sail with several crew on light watch. All had learned some Briton and Thorhaddr a bit of Latin. Those wounded stiff from battle with angry dead on light duty and Thora got to treat everyone with her medical skills. Mostly healed they headed for Ireland. The Captain had questioned the thrall about targets and found a bigger monastary of same order with fishy saint. Went up river and by night attacked. Trapped many in chapel, killed leaders who were posibly wizards with strange magic pariphenalia of the men without women. Poured through building killing, lootind and found the monks bolder from numbers but bareley able to stand up to monks. A few former warriors with weapons were toyed with and killed. Monks barricaded library but used pew as ram and burst in library killing most.

As most finished off found tower of silence with cell atop with bound monk in chains with locked muzzle. Opened his mouth piece and he blasted Thora with eldrich shriveling magic that almost killed her and ruined her skin. She and others hacked him to pieces. A questioned monk told man had gone mad reading forbidden books in library. Grabbed a few and burned rest. Old abbot cursed vikings in Norse to never rest to be tormented by demons and to die in awful manner. Unsettling to vikings so Hrafn beat him and took him to give to Odin cult as sacrifice.

Two visiting knights were biggest fight but made interesting slaves. Offered money for return but Captain said not worth effort or risk. Will work to death in dungheaps if trouble.

With ship packed with loot the burned rest and sailed home. The wealth and slaves and such would keep  them busy so declared rest from rest of reason. Several Marriages with Alrek having a honeymoon so Hrafn decided he wanted one as his wedding didn't include that part. The girls nagged Thorhaddr to marry the pretty loyal maid and he spent up big on own wedding as family too poor and got himself noble and rich suits. Learning new songs and a wide range of skills. Tempted to improve is dexterity but didnt. Thora married a rich self made landless merchant and had a baby. Throa had a child to a thrall and almost died. Alrek had a child and adopted a clan youth as a lackey. Throa was keen to learn magic possibly rune magic as she is a crafter. Alrek is becoming committed to Thor cult while Hrafn dedicated to Odin wolf brotherhood.

Eventually will be Rune Lord level. RQ always had great variety of different magic systems which I can use so no two same. I always enjoyed as a Player doing bonkers things with all the magical oportunities. Must read some of last 10 years published versions.

Cthulhu Pendragon a must in future