Bows and Magic For Faerie Folk 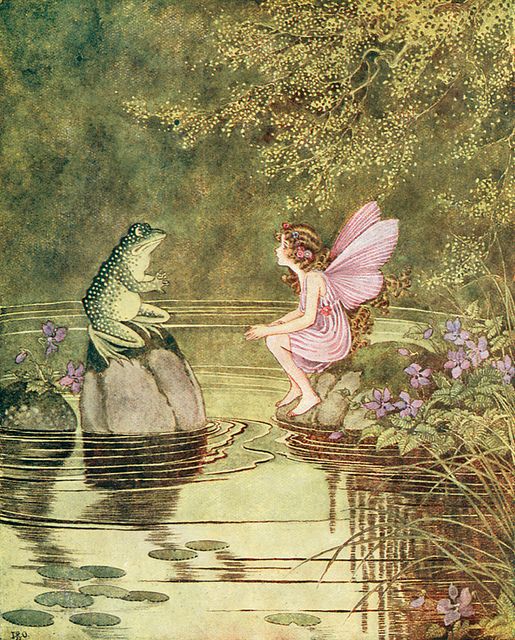 So as I mix BX with mid-1st ed with a few things from third I also allow a elf to choose druid or wizard or cleric spells and that defines what sort of elf are they. I do it with bards too. Worked very well. But I have toyed with making spell lists just for them and bards and mix up all three. I also have a Mentalist List (psionics and illusion magic) which I plan for Shamen to use and this worked with bards and elves. So this is a whole separate tradition of faerie magic which a elf or changeling may choose instead. Possibly dark elf versions a bit creepier. Some spells visually different to human ones

Damage Bonus on Bows?
- as I use DEX bonus for all hits mods and STR bonus for all damage melee or missile has worked fine (STR only damages no hit bonus)
-thrown weapons are fine but you need extra STR bows or crossbows to use bonus
STR 13-15 +1 Bonus double cost
STR 16-17 +2 Bonus five times cost
STR 18-19 +3 Bonus twenty times cost
-For every STR bonus of bow is better than what your STR bonus is -1 to use and half speed
-There are WP that let you use DEX instead of STR to dam or STR instead of DX to hit

Bright Faerie Spell List for Elves
I let the celestial high elves use cleric spell list,
they are kin of the stars in the celestial city

Forest elves use druid lists
They are proletariat elves of woods, forests and farmlands

This is a spell list for most common sylvan wood elves and functions for most others. It is a mix of wizardry and druidry. Possibly elf cultists use these lists or some goblins. Dark elf spells more about darkness, undeath and cursing and often reversed but mostly the same.

First Level Spells
Elfdart - slows victim by 1"/lv and -1skills/lv if they fail a save from joint pain, round/level
Detect Faerie - detect elves, sprites, goblinoids, brownies, gnomes and other beings or faerie places
Faire Dance - save or dance wildly round per level can flee, if victim higher Lv than caster only -2 to attack or act on a failed saveElf Arrow - makes a arrow become magical flame instead of weapon damage that can harm magic beings, one shot per Lv
Silver Blade - can hit anything requiring magic or silver can cast on edged weapon round/Lv

Third Level Spells
Spawn Goblin - turn a mass of fungus, ferns, shrubs or a human baby into a goblin
Spawn Orc - turn mud in a pit into a mindless newborn orcFaerie Food - charms failed saving throw victim to want more, taints them with faerie nature
Planar Vault - disappear for a round per level and move through other plane, use to pass through solids, aware of real world vaguely and can navigate in the confusing between world place

Fourth Level Spells
Tree Curse - turns enemy into a tree unless reverse spell cast on them or to make a tree into a wildman who probably panics and flees promptly
Walk Between Worlds - travel through weak points in planes like between faerie worlds.Often marked by stones or increased spirits

Seventh Level Spells
Faerie Gate - make permanent gate to faeryland, can be opened monthly or require ritual or dance or spoken phrase to open. Often based on lunar cycles and solstices

Posted by Konsumterra at Monday, February 05, 2018