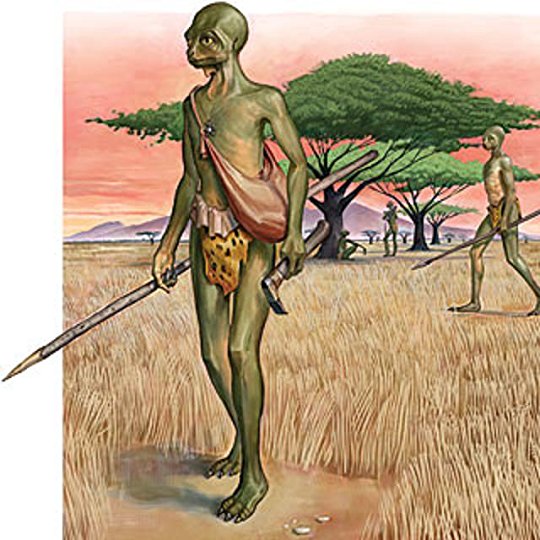 Ancient Ruins
Some ruins predate Planet Psychon or are at least modeled after them. The gods like to create intact ruins complete with cultural history and languages and other details much like they did creating computer game simulations to entertain the masses. Some of the civilizations they create fall into ruin also. Some of the ruins seem to be from ancient bronze age or medieval. Others are steam age, decopunk, or later eras technologically. Many ruins are lairs for tribes, bandits, animals and monsters. Some have ancient synthetic constructs like golems or robots. Some are contaminated with plages or contaminants and other hazards.

Citadels
Citadels are gigantic multi story compact city structures. Many are ruined or have ruined sections. Some still have functional AI and other intact systems. Each citadel can provide months of adventure for explorers or even a place to live or conquer. Some citadels are even mobile. There are regions where where citadels are mobile and fight each other. There are sea citadels and ones underwater on the moon and other planets. They are the most common form of large population centre.

Dimensional Spaces
Some AI Gods have mastered the ability to generate gateways and pocket dimensions and defy the laws of time and space. Some AI store components and store raw materials and world building apparatus in such spaces. Places like heavens, hells, underworlds, elemental planes were created like this. Such places are very dangerous and unpredictable.

Bunkers
Many ancients built bunkers to survive the apocalypse living in self contained sealed societies. Most died leaving interesting ruins to explore. In many more cases the gods created many such complexes and more recent civilizations in the age of Planet Psychon build them. Technology levels can vary but without humidity control, air filters and pure water such complexes fail. Some live in ruined bunkers existing on scrap and repairing what they can. Some are pristine marvels of superscience. Morlocks especially like them and often herd Eloi in them.

Luna
There were many lunar bases and mining complexes and citadels on the moon. Some teleporter stations, gates and transit shuttles still function. Most are products of ancients of earth but Eldren and Morlocks and humans and gods of Psychon have remodelled some. Some are very exotic and overrun with all kinds of strange creatures.

Mars
Mars was partially terraformed, planted with forests, citadels, people and dinosaurs. The AI of mars are wary of Psychon and visitors. Only a few ships and gates make the journey.

Orbitals
In orbit are many platforms and structures many holy to the gods and predate the fall of Earth. Great treasure and holy temples are commonplace. Teleporters, gates and shuttles are the main means of visiting. Some modes of transit are one way though and require extra problem solving to escape or you might have to go to the moon or another orbital to return.

Settlements
Settlements are villages, camps and towns of regular folk. These are places to meet, trade, rest or retire to. Adventurers might even set up their own settlement or colony. They are good places to get missions usually. Some are hostile and instead are places of conflict or require stealth to get what you want for a mission.

Sub Worlds
Subworlds are part of ancient transit tubes that linked the world. Originally the tubes were vacuum sealed for maglev trains or some were huge highways. Many stations were complete with parking, malls, hospitals and other facilities. Many have survived constant terraforming by the gods (or have they?). Most fear them as sacred places of the ancients.

Temples
Temple complexes vary from small shrines to great wonders like pyramids or huge statues or sprawling complexes. These are the best places to find priests and talk to the gods via monitor screens. Some temples share the monitor chamber among several gods. Temples of bad gods are often places of adventure as are ruined old temples of long dead or dormant gods. Many are guarded and gods don't like their holy places sabotaged.

Underground
Great caverns, underground cities, bunkers, transit tubes and all kinds of spaces exist in the deeps. Some are so lost they predate Psychon. Strange creatures might adapt to the deeps and food can be scarce. Certainly many good adventure locations can be found in the unfathomable depths.

Under Water
There are underwater citadels and habitats like domed cities, wrecked ships in the deeps. Some have flooded sections. Some live trapped in the deep as prisoners. Some humans were modified for depths and can even breathe water with gills and webbed fingers and toes. These still rely on technology and the mercy of the gods. Some went further becoming aquamorphs or fishmen abhumans, dependant on water to live and limited away from it.

Venus
Venus terraforming never worked quite to plan but there are orbitals and cloud cities in the upper atmosphere. Nobody is quite sure what is under the clouds. A high pressure wasteland scarred by ammonia rivers or dinosaur filled jungles.

Wilderness
Psychon offers many strange types of wilderness. Besides the tables in the Planet Psychon book I like to find any exotic landscape photography online that looks other worldly and use that. You can always colour shift them to make stranger looking.
Posted by Konsumterra at Saturday, February 17, 2018