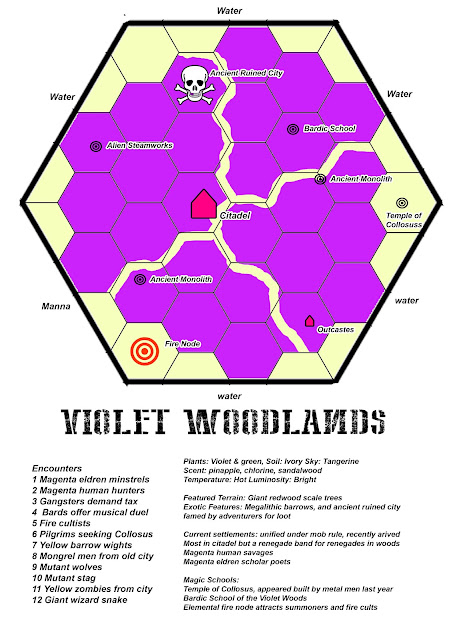 have been interviewed for my arch nerdery at hackslashmaster.blogspot.com.au/2013/05/on-osr-new-wave-chris-tamm-of-elfmaids.html
Thank you very much for this - best titled interview ive ever had

This thick forest of giant violet trees dominates with several ancient clearways to the new citadel built with aid from the god Colossus.

While mob forces dominate the magenta tribes living in the city, a outcast tribe of rebels act as bandits.

Ancient monuments from ancient yellow men are seeming shelter from weather but filled with barrow wights.

The ancient city was destroyed by fire and undead aeons ago. Adventurers and looters flock here but the magenta mob clans demand a cut. Yellow zombies and worse dwell here.

Ruins of an alien steam foundry and logging complex is a popular bandit and cultist hideout.

The fire node is a gate to the fire plane that seasonally opens in a great red stone pit with a winding stair case. Fire beasts and cultists are common here.

The temple is a great steel tower guarded by flame strikes from the gods eyes in heaven. Colossus has an active temple library here and will consider audiences with the worthy. Colossus cultists obay a strict regimen of diet, sleep times and trivium. The help colossus spread across the world to bring an age of justice and peace. They often aid adventurers and give them quests for ancient tech and against evil gods. Collosus was alive in ancient times and is considered the oldest god. He still has adepts clipping mystical cards in some shrines.

tukemal good too
earthdawn seemed too new age to me