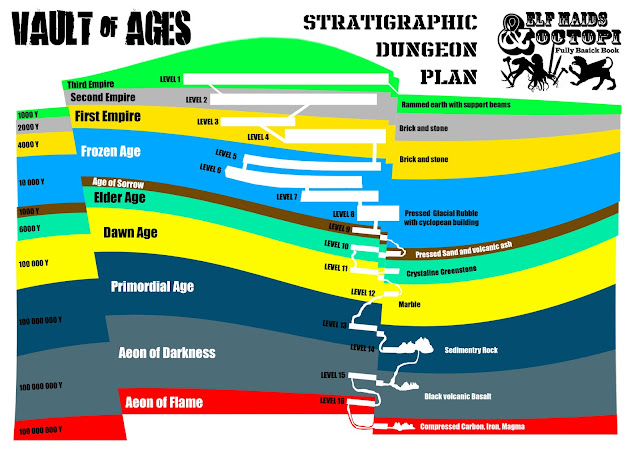 All part of crazy idea inspired by my uni archaeology and pic of troll evolution by edition like those walking cave guy silhouettes. I considered archeological digging of troll graves over aeons and seeing this in layers in earth. Then thought what if different editions or settings equaled layers. An age of Cthulhu monsters, or Carcosa, or Tukemal, or 4th ed would be for heroic ancients with 1st Ed Adnd being a more recent gritty age. Perhaps there was a dark age of technology layer where buried robots and rayguns are found. Some of my dungeon zones might work well here.

Create geology to expose the dungeon of the era you want and players will get to pre read dungeon geology. Stocking treasure would this logic too - I could use Cthulhu horror biotech treasure at one lv, divine relics from god war or evidence of past apocalypse on another.  It is rumored of deeper layers from previous planes, predating this one. I could do under land maps of Exile Island. layer by layer hmmm. Glorantha would probably have done this.

Aeon of flame
Age of burning metal, not much to see. Elementals and salamanders, no sentient beings

Aoen of darkness
Age of silent infinite darkness, some water and rock appearing mostly desolate black rock metal and ash in later period. Some life formed and dwell in the depths

Dawn Age
A new generation of gods bring light, kill monsters, free the people and lead them to their true homes. Gods and spirits and magical beings had minglings and interacted often. Mortals appeared at end of the age before death finished the age of the gods

Elder Age
Horrors from the dawn of the primordial age returned and made mortals their slaves. Serpent men, Bat Men, Mage-Spiders, Reptile Men, Mind Flayers, Frogmen, Firenewts and Fish Men ruled civilization. Other alien beings came ant took slaves too, experimenting on life they found and leaving evils. Magicians of mortal races: humans, demihumans and goblinoids drove the primords back to the dawn of time and a great rebellion destroyed the civilizations of their servitor races.

Age of Sorrows
Humanoids were free from monster slavery but many hid in dungeons to survive this age of purging and cleansing. Driving back the primords turned the world into a desert. Humans who were free often became like their former masters who preyed on others. Rival dynasties of necromancers ruled the world. Mind mages formed kingdoms in the deserts where primords could not. Faith in the gods returned and the rain and powers of life returned ending this age of black magic.

Frozen Age
Humans dwelled in caves and battled great beasts and rival humanoids in the glacier covered world. The great sun temple was rebuilt and a second great dawn ended this age and the power of the gods was with humanity again.

First Empire
The Dawn Emperor spread civilization and saved humans from savagery and ignorance. Bronze overcame stone everywhere. His citadels were impenetrable. The Dynasty ends when serpent men infiltrate the royal family and the empire is torn to the ground overnight.

Second Empire
Third Empire arose to exterminate an attempt by the lich kings of old to return, resulting in a reborn zealous new empire, dedicated to destroying evil. It used iron and silver to slay evil. Eventually killed all the evil it could reach then internally collapsed when it turned on druids, wizards, sorcerers and other magicians.

Third Empire
A new style of empire arose based on trade, repelling a growth in goblinoids and a spate of evil cults mobilizing the people to unite. Various kings elect one house to be in controls theoretically but emperors have held more absolute power. New technology such as steel, guns, advanced sail let the empire re dominate the known world again. Kings and princes are mid tier aristocrats and common nobility today. The current mad young emperor is having a difficult secession (civil war). Adventurers are now being sent to dig up relics of the past for the war effort.
Posted by Konsumterra at Saturday, May 04, 2013