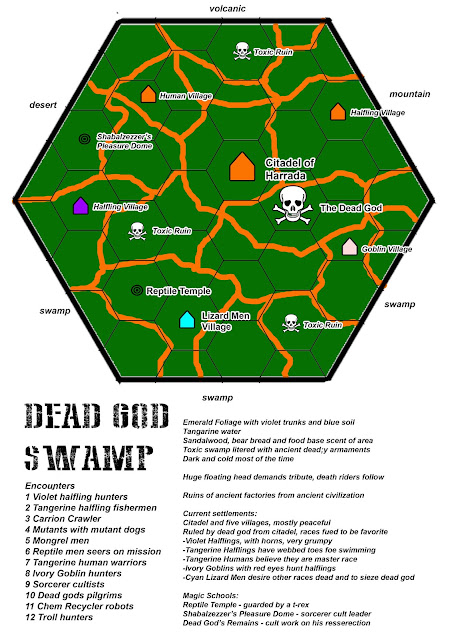 Blogger redated several older blogs i dared to edit so apologies to all if you were stung.

The typo in flavour section is "bread and beer" - this hex smells like a huge brewery bakery mess hall with some cheap sandalwood incence. bear bread does sound tempting.

I had crazy notion about animals on planet psychon. Use earth names but completely bonkers freaks nothing like earth ones except perhaps size. Obviously Will do post on monster encounters on planet Psychon.

Will do a hex for each of the sacred terrain types 10-12 as examples and do at least one really nice hex.

Dead God Swamp is a toxic wasteland with the central feature being a ruined mecha gargantua and former god, slain an aeon ago. A cult hope to rebuild it. Many races here work on the project. Violet and tangerine half men hate each other. The tangerine half men believe humans are their descendants.

Ruins of ancient chemical plants are guarded by robots but could aid in the rebuilding of the fallen god. Reptile men believe they deserve this more and sabotage human supremacy.

Dealing with various tribes on the god project, recovering ruined factories and exploring the temples are a worthwhile goal.

The floating stone head is straight out of Zardoz of course and a good way to move players to some distant land.
Posted by Konsumterra at Monday, May 06, 2013