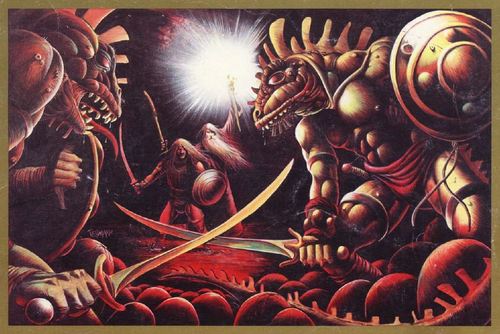 Mark one of my players said he totally gets my progrock fantasy so looks very viable for future. Some character creation stuff and monsters needed.

Carolyn played Amybrr, Templar Priestess of Gestianna - a wine underworld dream divination goddess. She has discovered her cult use holy wine instead of water - she started pouring libations out when healing, spell casting and using her holy power to question the dead. Healer and able to sense evil.  Her flunkies include hunter the dog (4HP d4 bite, track) and douglas the wayward youth with 2hp and a pole. Has actually survived and hurt enemies with a club because no foe takes him as a threat.

Mark played Humblezorg, modronic sorcerer of law. Staff and shuriken wielder. Keen fighter even with 7 strength, uses magic missile when he has to make a shot. Passes as holy healer quite well. His flunkies include Cuddles the war pitbull (6HP d6 bite) and Gary the lamp bearer. Gary is a 40 year old animal handler and widowed childless farmer. Is a pragmatic and clever helper (4HP).

Matt played Forest a monk of the drunk frog order who all act like drunks in front of outsiders and act pretty much like average town drunks while really vigilantes. A two stick fighter who tumbles and hurls flaming grog gourds. Newest party member. Has a large male pack billy goat (6HP d6 butt) named Tree.

So the party got a brief from the impirial dungeoneer corp luitenant and told to keep scouting, aware that the Barron of Skullport might start resisting the Empires return. So the gang visited Cymbal mountains where dozens of monasties of every order are built, where a truce between all orders has stood since the dawn age. A pleasant walk on the safe road let them view crumbling chimneys and garden walls and graves of the lost kingdom killed by plague and covered in undead filled forest only 200 years ago.

They visited the moon monks of the lunar god who seemed the safest bet by dusk. The monks welcomed them through the great moon gate and showed them a stable.

Humblezorg snorted "are you kidding?".

Leaving their man servants and dogs in the stables, monks showed them monk cells with straw pallets.

Humblezorg remarked "dont you have proper guest rooms for important visitors. I thought nobles sent their children here to study?".

The monks sighed ans took them to a nice wing of such rooms. Everyone else was kinda impressed by his charisma anyhow.

The next day they watched martial drills and met Forest a visitor from another monastery here for cross training. Witnessed some austere punishments for students and had humble food tilll they met the abbot.  They gave him an evil statue which he thanked them for (he keeps locked up) and he remarked he and most monks were pro empire (didn't mention emperor ever). He asked if they could investigate a valley where monks kept killing undead which always returned - could they find out why. In return they would always be welcome here. Party all being lawful paid off.

Visited drunken frog monastery on the way. A vine covered ruin on the outside. Forest brought some spirits and Amybrr got some wine. Humblezorg noticed monks faking being drunk surrounding them at all times. Forest admitted this order wasn't first choice but other order eunuchs.

So they found old farm and noticed crows surrounding them. Someone saw they were undead. Set a dog on them and fight broke out before swarm formed, scattered them before any harm. An old lady in hut signalled them to come in as zombie animals marched from barn. Sensing she was in fact the greatest evil ever felt by those sensitive, Forest threw a burning molotov and set alight the thatch cottage roof. She screamed abuse and plane shifted avoiding the sunlight and fire. Amybrr charged and hit the decrepid sagging zombie cow dragging her entrails from the barn. With a sword blow the beast burst like a balloon full of rotten meat. Living goat beat the zombie goat, and the dogs killed the zombie chickens and zombie dog. But the leviathan of rotten flesh, a 300 pound zombie sow with zombie piglets bursting from her sides ignored the spells and blows and crushed Humblezorg. The survivors pounded the sow into a necromancers meat tray raffle and saved Humblezorg.

They found the animal graveyard and dug up and burned all the long buried remains. Amybrr  consecrated the site as a graveyard as well as she could pouring holy wine over the site. Found hags foci object letting her gate here which they burned. Also found a +1 oaken club bound by cold iron buried in a box. The abot was pleased and welcomed their return.

On the way back went through haunted forest out of curiosity (been told to not to provoke dark elves). Heard goblin fight (party so keen to get speak goblin now). Found six goblins unarmed fighting over a "bone mine", filling their packs. The party ambushed and slaughtered them. Amybrr called up a goblin spirit with a libation of holy wine and learned of an ogre on yonder hill. The party Went home and returned next morning. Snuck into ogre home smelling of bread and a charnel house. Found Ogre baking bone meal bread and failed to sneak. Chased by the horned ogre, the party scattered then pelted him with missiles. He almost killed Douglas (-8!) before party creamed the nasty ogre baker with crossbows, magic missiles and killer pets. Stabilized Douglas and dragged him into ogre lair to camp. Found a small sack of gold and a potion.

During night saw priests of sun god battle undead and were almost mistaken for necromancers. Made friends and Humblezorg shamed them into healing Douglas to walking condition. Returned home in morning.

Three days later party went to marshtown. A huge yellow pus dripping stinking boar eyed them off but Gary toatally knew how to scare it off yelling and waving a big leaf covered branch. Party pretty impressed but Garry does stuff like that.

The village is on edge of evil swamp Forrest and between evil city of skulls and the bloodsand beach where whalers and sealers rend thousands of adorable sea mammals into cash. The barrony controlling both settlements employs orcs and hobgoblins who add to the scum here. Bailiffs watch outsiders warily. The Dumazi temple seemed run down. Forest was signalled by a drunk to crawl under a house with offer of booze. Up close the drunk tried to attack him and throw him down a pit, but wily Forest playing dumb and surprised him, beat him unconscious, strangled and robbed him. Discovered a snake tattoo and medallion. In the pit was hobo clothes and the killers bed but no bodies. Amybrr called forth the murdering hobo's soul and questioned him, learning four names of the serpent cult members.

Ignoring the taverns - one a pit of villany the other an oderly merchant guild. Humblezorg pushed a merchant for "special" items and got offered drugs. Luckily sorcerers are knowledgeable about forbidden vice so Humblezorg made a deal. Everyone went to temple and eventually roused a sad tired common bailiff. Amybyrr demanded entry to see her goddesses brother. He was dismissive and Forest invented a ruse about important holy wine samples for a delivery. Mongla the bailf fetched his master Dandros and the party came in to see a corn headed statue of the god with idols to Amybrrs goddess and lots of snake idols. The party knowing these men's names were mentioned by the murder hobo got the evil men drunk and drugged. Amybrr was offered to stay with the priest creepily.

Humblezorg and Amybrr sensed evil watching them so the gang attacked Dandross (3rd priest) and Mongola (2nd warrior). While the villains were sorely pummeled they lived and  two troglodytes burst from the secret panel behind the idols.  Forest and Cuddles went down and hunter spewed from trog stench. Amybyrr healed Forest while the goat and Humblezorg finished the drunken men off. The trogs couldnt get through Amybrrs templar chain and the party fell on the trogs finishing them. Feeling very lucky to be alive the gang looted the place and left a fire and fled town.

Back home the party returned to the moon monks to study and train. Humblezorg studied wall  running from the monks, still meditating on new spell. Amybrr still thinking. Forest being a skill specialist learning bluff and 2-h fighting. He rejected the magic club as not right look.

The dogs will probably get armour but party talking of giving them a good retirement long term. Certainly saved party and Gary could manage them and keep alive with his animal handling ability. Douglas has kept his morale up and still wants to adventure after being smashed by ogre. He and Gary have advanced from peasants to militiamen HD 1d6. Gary taking a shortbow and practicing sneaking (could wind up rogue or warrior). Douglas wanting to be a hero type is taking long sword, crossbow and learning healing arts from other party members (probably priest or warrior).

Party seem pretty keen to wipe out serpent cult. Humblezorg may become alignment fanatic giving him anti chaos mods. Already part modron. Seeing a monk grow will be interesting too, drunk hobo monk has interesting potential. Amybyrr getting more capable with questioning dead and getting into her cult role well. Nice that party are empire agents and very lawful. Party have an evil hag and dark elves as enemies now. Luckily the reptile cult is without high level priest spells (Inspired by reptile cult module of old).

Remnants of last party about - a few 3rd and 4th characters in city. Urchin group may have to separate as this game probably will be weekly which is great. But could mean some cross overs. Urchin group will be doing my redbrick dungeon - will develop one of my big dungeon maps. hexcrawl vs dungeoncrawl party - good for me as DM. See if i can get some new players.
Posted by Konsumterra at Tuesday, May 14, 2013