Fresh Encounters with Freaks and Monsters 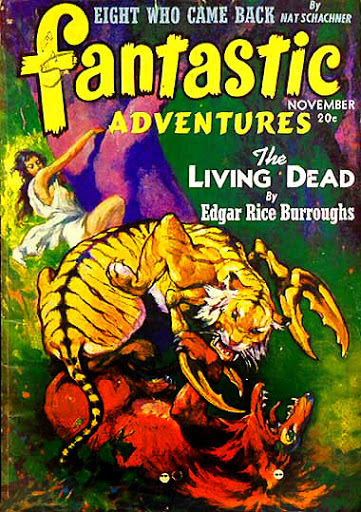 So ya wanna fight weird monsters  like on planet Psychon? well here is the rules!

My current setting design for late 2012 is planet Psychon, a post psychogenic warfare earth an indeterminate amount of time in the future. Its a world that cheats and rearranges itself in hexes, and occasional even the great machine sky gods redesign a location or move a party of heroes without them immediate knowing. Anyway so i have some hex design rules and some samples, and means to generate exotic variant humanoids so what next for more weird encounters. Mining old TSR obscure gold and adnd literary source appendix sources is a help.

But this is my current working theory of monster making, especially as my project world in the making has no natural animals. so i need lots of weird stuff. Im trying to increase and subvert all the monster tropes in this setting, while my Exile island game im running is classic 80s DnD and fighting fantasy. Its apropriate to go full bore gonzo on Psychon, but im a bit more restrained in the Exile game and feel im introducing new players to classic tropes of DnD so a exotic boss monster and some tribal varients will be fine. 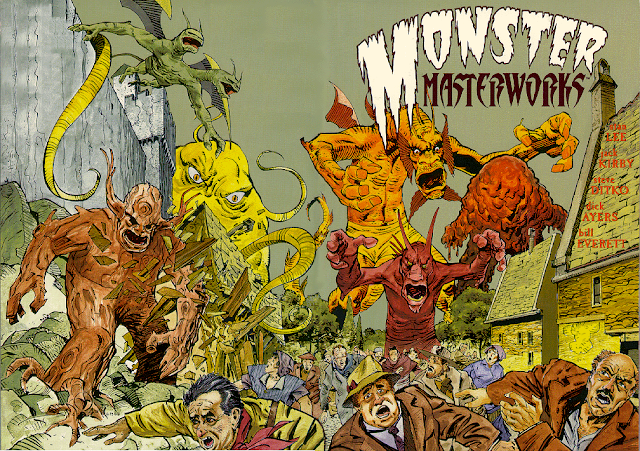 1 Use more fiend folio monsters
Dig up alternate old school sources. Dragon, White Dwarf first hundred issues had great weird situation specific creatures. Some Fiend Folio critters make good unique one offs and are just tricky variants of other monsters - i guess in basic dungeon monsters are more like traps so a weird variant or simulacra but different would be cool occasional trick. BX D&D had some really cool monsters that never got in adnd, and what happened if i like dnd salamanders more than the adnd ones (which are cool, just not salamanders). Frost salamanders, devil swine, bronze golems, bone golems, all sorts of weirdness in basic dnd. Oriental adventures too. Gammaworld 2nd ed is the weird science source pack for Elmore Basic DnD too so go digging there too. I never gamed spelljammer but their monsters would mostly work in Psychon. 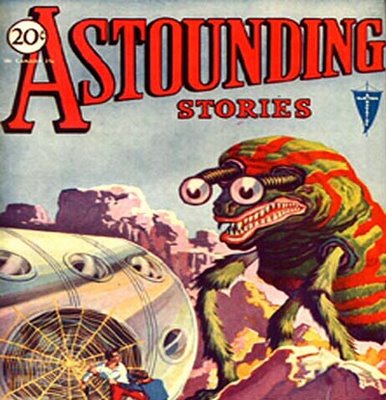 2 Use more variant monstersi have to say best monster description section add on ive seen in any game is mutant future with a variant table for every species. Different tribes and sub races is cool. Does monster really deserve a whole stat block or is it a goblin with a gimmick or cultural difference or cosmetic adaption. Sub species aplenty and variations you would expect in a dog show. 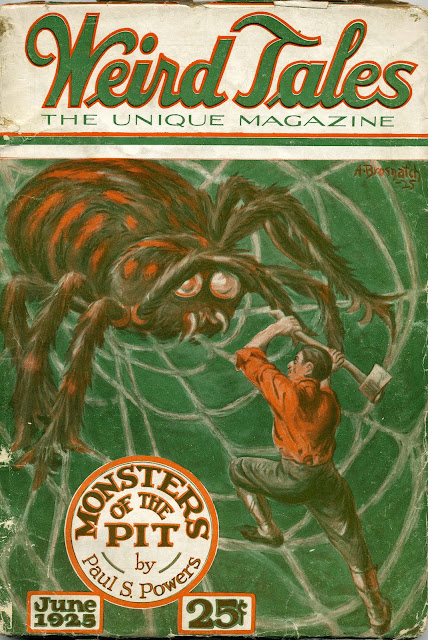 3 Use more mongrels and mutants
Warhammer/40k/stormbringer/runequest/gammaworld have mutation tables to change basic monsters or even animals is cool - good to change ordinary critters into chaos spawn. Thus my own tables. Mongrel monsters are easy to make, just add 2 or 3 creatures into one. Wizards hide pits of reject breeds of monsters in out of the way places. 4 Use more re-skinned monsters
Take basic monster, what else could you use its stats for in a pinch. Reskining uses for a monster might be handy to consider too - when in doubt reskin a bear and use as stats for a cave beast or a gargantua rat or battle wombat or a swamp troll or a small dimetrodon or a hyenadon. Add a power and extra attack and its a new menace. A strider is an ostrich with fireball attack. A raptorsaurian is a big ostrich with claws. 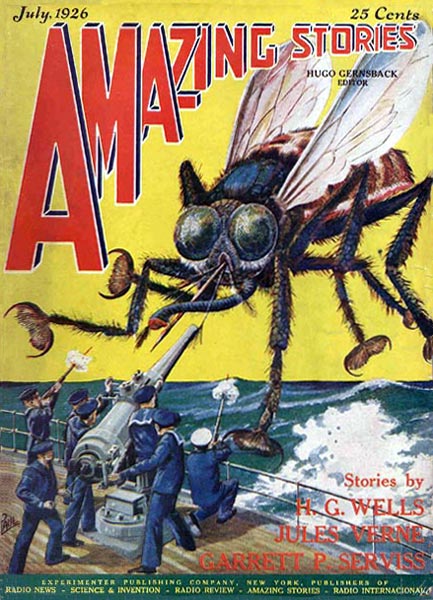 5 Use more combination monsters
Monster template add ons to plain monster in new DnD look cool but newer books have too many stats and feats than i need to know - psionics was bad enough in1st ed. At least 2nd ed psionics it felt like same game. Adding some psi powers to a creature seems less threatening now (under my psionic system). But anyway i digress - combination monsters are of a basic species but also hybridized with another monster type. Eg a bugbear but is also a were beast/undead/cyborg/fey/diabolic/giant/dwarf/elemental/clockwork automaton too. A combination monster of legendary status might be taken to dwell on another plane granting another monster type to the mix. A werewolf cyborg comes back as a vampire after being killed. Boring old griffons cant hold a torch to arcane lawful fire elemental ones that sit at gods hand and destroy the chaotic. 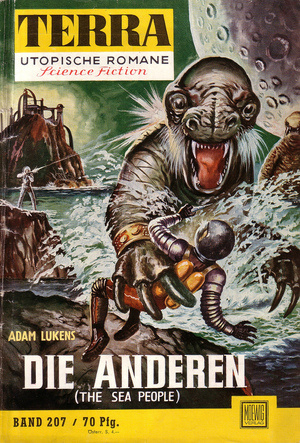 6 Use more smarter/dumber monsters
Change intelligence, sentience, cunning know how or technology. Take normal monster make smarter or a wizard. Make a genius monster moronic or insane or cursed or with an alignment shift. A titan with a leaky stitches in his head, prone to doing wherever the creatures who seize his ears recommend. Titan thinks is his internal dialogue. If different factions get different ears titan goes crazy and flip flops on everything.  Or take an owl bear and give him godlike intelligence 21 and he becomes a boss monster and bullies a wizard into giving him some learnificating. He becomes a cunning villain who grows as party does. Monsters that survive or kill a henchman and escape should learn too. Perhaps some get field promotions or eat some royal jelly since the party last visited the dungeon, gaining a HD and a new skill. Kobolds with gunpowder will make you players swoon with delight. If ancient Chinese had gunpowder landmines and explosive traps then kobolds could be equally inventive. Think how pleased your players will be. 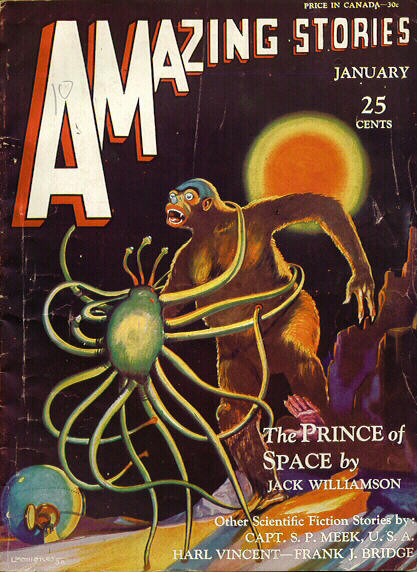 7 Use more more/less magic for monsters
Change to make more or less magical than normal. Take away magic powers of a powerful being such as a cursed demon, now just a vulnerable monster for a few levels lower but still scary. Some demons may seek to breed an earthborn strain for an invasion spearhead. Weaker and more vulnerable but immune to banishment and holy symbols. Take normal non magic beast and make it a magical or other worldly version from Arcadia or somewhere. A flying pig with charm person and invisibility follows party and steals their food all the time. Sentient animals and objects are great. A very cunning beast might lure party into hazards and know secret passages. Animal farm would be a deadly 1st level module. Farm animals with sentience can get up to lots of things. A beast might fall for a hero and develop a human form in a oriental fairy tale. Animal spirits fey folk as in oriental adventures was fun (i mean 1st ed). An evil raven might stalk the party and inform every monster in their path. Heck make it a cute mongoose that they hand feed so they will never suspect. Some fool might adopt it. 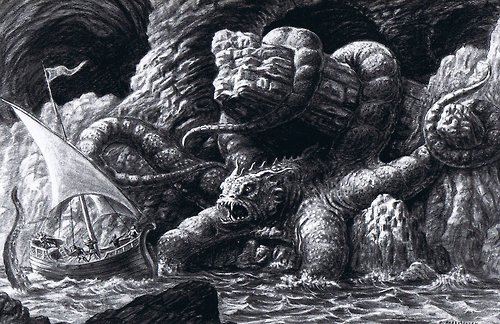 8 Use more faux monsters
Have some faux monster every dungeon. Looks like boring old monster but is something totally unexpected - old AD&D fiend folio full of these like a faux mummy which has folds of skin and glue that goes for the guy trying to turn it. Looks like a goblin but a nilbog is an anti life version harmed by healing spells (dogpile then bury under a new building to stop). As soon as they yawn at a creature or go into a predictable combat mode then time to change. Pod people are faux humans, many other horrors and beings in human form. Weak creatures may pretend to be more powerful like the radium ghost tribe of kobolds. Tribal monster costumes and war paint are one thing but have them accompany tribal axe-dancers in a huge dragon costume. Filing teeth and staking out torture victims is part of this too. Seeming to be extra bad among own peers could account for a brutal tribal custom or self mutilation. Reputation and morale more important on a tribal level. Creatures with hoods and masks skulking about so race uncertain is a good policy (lawful elves or evil orcs or nuetral druids?). Ad some fog and make both sides paranoid with spooky owl sounds. 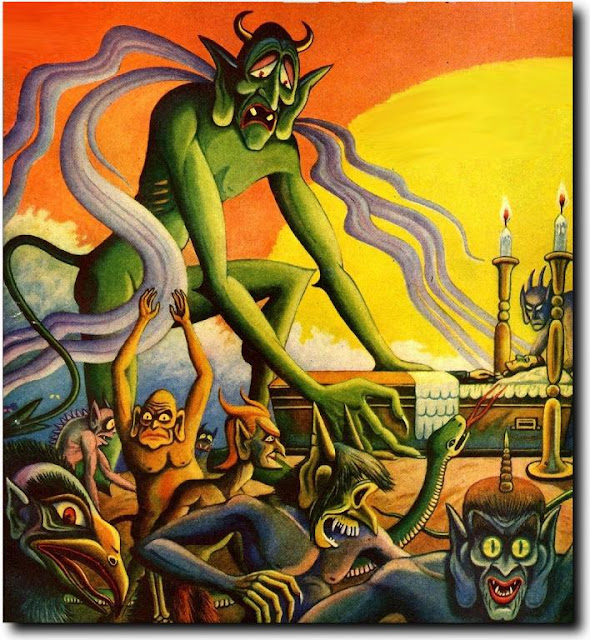 9 Steal Stuff from other games, comics, fantasy art, film posters pulp covers etc
Look at some old pulp mags, national geographic, your favorite art sites of the right genre, then steal scenery, buildings, monsters, robots shamelessly. Pick say three images and write a scenario using the things. Id look over pulp mag art books as a kid and invent stories for them. Mars attacks and dinosaurs attack bubblegum cards good too - not just for the monsters but the pregnant with peril moments captured by artists. Movie montage posters are good as they encapsulate features of a film like characters and threats. Look at the classic DnD monsters based on plastic kaiju toys from japan - bullette, rust monster, etc. Stealing Japanese monsters or slapping on some Cthulhu Mythos weirdness is pretty sure stuff. 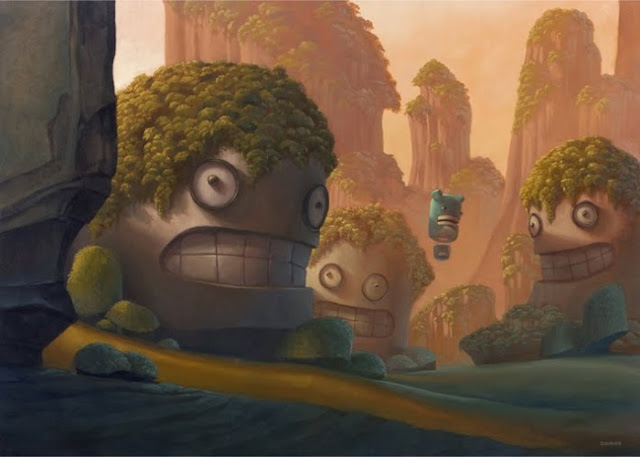 10 Make up crazy stuff
Using all this stuff and doing it on the fly. Breaking out of hundreds of versions of 1HD humanoids seems more a limitation than a freedom nowadays. Actually I recon you could have simplified monster stats built into enter tables like old modules. But getting in the habit of using less specific stuff and altering things on the fly is good for you. More unique species and variant monster make the world deeper and keep players on their toes. Random tables from blogs or Carcosa can make one off monsters which seems more literary than endless green orcs.

Exquisite corpse the old artist game good too. If you play with children they will tell you what powers the monsters have. What would Frankenstein do? Roll up random monsters then cross breed them or chop them up and reanimate the bits. Pretend different artists drew bits of a monster like exquisite corpse. Try collage. You actually have to trick your imagination with a new experiment from time to time. If being crazy isnt your thing you just need to practice.

http://en.wikipedia.org/wiki/Exquisite_corpse
not a great example of play but use to make monsters with kids is fun 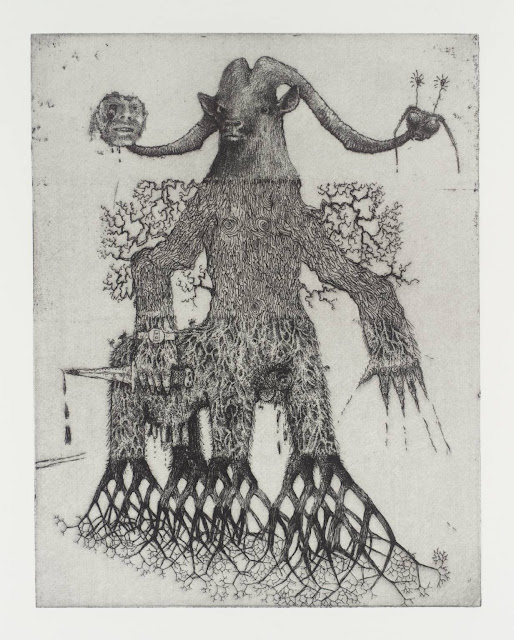 A stupid way to ruin your forgotten realms world.
Hmmm an alien xenomorph outbreak in a alien Sathar ship crashes through the crust into the underdark. An area ends up with xenomorph-mindflayers fighting xenomorph-beholders. A half minataur half githanki cyber lich from the future come back to warn us. A clan of bugbear gangsters with gate to 1920s Lake Front city earns them a lucrative income selling grog for guns, which they use to battle both mindlayers and beholders. Bugbears to up the ante even more have been getting vampire bites and werebeast bites. Other poor underdark races are mostly fleeing to the surface but the recently awakened lizard men with ray guns and domestic cave dinosaurs are digging in to resurrect more of their kind. The Aboleth have responded with a small underdeveloped tadpole inserted into a brain sucked skull left by a mindflayer. Then the cranium is filled with mystical neural peptide sludge and the skull re capped in ornichalcum to create aboleth controlled zombies from the thousands of corpses the Ilthiliads dump in deepest wells into the earth. Not to be outdone Lolth has created a new breed of were spider so male drow get to do something cool and and a new kind of zombie animated by millions of tiny spiders that swarm out when the zombie is killed. Take that under dark. Better bring in the gamma world death machines to clean this lot up then. 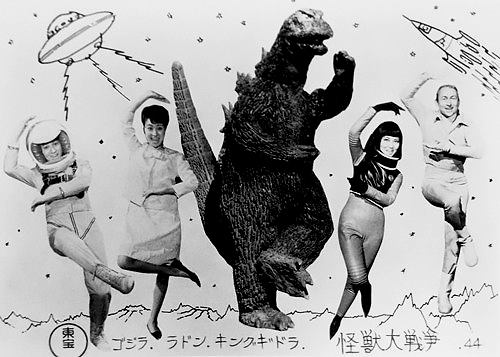