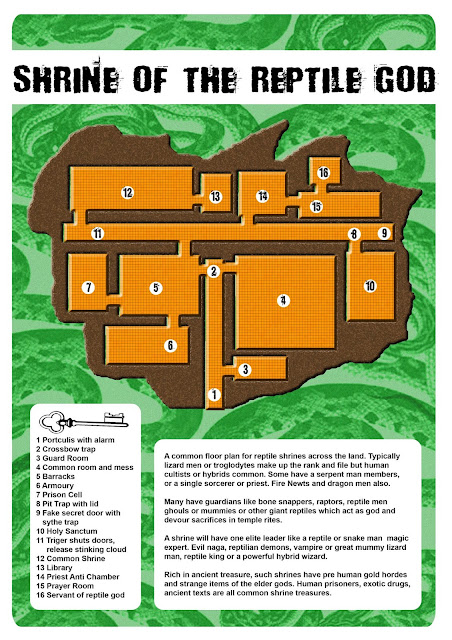 Making a few generic location maps up for next DnD. Practise making one page dungeons.

Got pad of isometric graph paper so playing with them on computer and at home - looks like good for 3d drawing practise, cities, some dungeons, vehicles etc.

But for now this. Will be used in near future DnD session when party at least all 2nd level.

Dozens of carved shrines like this have been discovered. Some with human cultists or even a cult of reptile men or snake men.

All these practise evil rites in the ancient carved monuments.

If the mounds are dug back then a snake entwined dome is under the hillock.

Some carvings portray the ancient reptile empire and the old ones they worshiped. Images of slaves, wailing captives, vassal kings with tribute, bizarre rituals and obscene ceremonies. Older art is pre mammal, later show first apes then cavemen prisoners and sacrifices. Aeons later the slaves had supplanted them but serpentine birth omens would earn a place in priesthood or royal bloodlines. Both ancient reptiles and ancient human cults kept reptile pets and guards. The gods can bring back lost species of the past by enchanting eggs. Lore of the reptilians is a great source of mystery.

Amphibian races have occupied some bunkers, defiled them and worshiping their own bactrian idols. Fire newts with pet fire toads, strider and fire snakes or bullywugs with giant frogs and war snails. Dragons have been on and off allies and had overlapping cults. Different reptilians groups may feud among each other but may unite against mammals. Other races including demihumans and goblinoids feel repulsed in the shrine and recall the slave age of the past stronger than humans. Pity the human with snake blood (1in20) whose presence may stir ancient ghosts and demons. Some sorcerers report getting their first magic dreams in such places.

Some sorcerers use these old monuments as seats for their vice and pleasure cults. Though this could be machination of a serpent cult, leading a snake blood sorcerer to his inheritance and turning the epicurean cult into killer mad men. Such sorcerer dens practice gambling, drug abuse, forbidden sex acts, exotic performances and worse. Sometimes they become hotbed of politics and young ambitious members.

Prison of the reptile cult 1d20
roll a d4 or so

1 Village maiden in tears
2 Child with straw doll, mute with shock
3 An old wise woman or witch in iron chains
4 A bound and gagged old man, sings courageous songs constantly if freed
5 Village idiot, drooling hulk but brain damaged 2nd lv war veteran 18STR
6 Old village drunk desperate for goon (wine), pickpocket
7 A cow chewing on a bale of hay and fresh cut reeds (slave cow of the reptile god!)
8 A pig (1in6 a polymorphed teen merchant kept for ransom)
9 A monkey on a chain who likes to smoke or a parrot chained to perch who likes to swear
10 A dog in a cage, hungry and looking for friends
11 A chicken in a cage
12 A duck who will follow loyaly any rescuer
13 A rabid rat lives under a bunk
14 A boy with a fishing rod
15 A drunk barbarian who doesn't know common
16 A cultist in disguise, to learn about inmates
17 A local militia man, blinded
18 Snake charmers daughter, has insider knowledge of cult and hates them
19 Kidnapped nobles daughter kept drugged for ransom or sacrifice or worse
20 A sack of marsh rabbits or barrel of live angry giant swamp rats

Documents of the reptile cult 1d20
1 Boring reptilian accounting, receipts, records and lists
2 Astronomy information including reptile star names and their gods
3 Biology manual on care and control of apes, vivisection and sacrifice guides
4 Weather measurements over some huge epoch
5 Mining charts and sample analysis
6 Alchemy text of experimental formula
7 Biology manual on one monster species
8 Study of ancient fern tree forest
9 Recipe for cooking and serving human including live dishes and use of torture for flavour
10 Philosophy report against degeneration of reptiles and mammals are to blame
11 Manual in dinosaur training
12 Sex manual for reptilian overlords
13 Primer for students to learn language
14 A reptilian version of a spell
15 A report on one of the old ones and their cult
16 Metaphysics on the value of human souls, do they have them? do gods approve of sacrifices?
17 Poetry describing drugged visions of the pleasure pits of the great serpent goddess in the next life
18 War documents against another elder race with maps, possibly magically trapped or in code
19 A priestly ritual document with music, steps and costumes described
20 Blasphemous ritual of ancient serpent wizards and the primordial gods long ago imprisoned
Posted by Konsumterra at Thursday, May 09, 2013