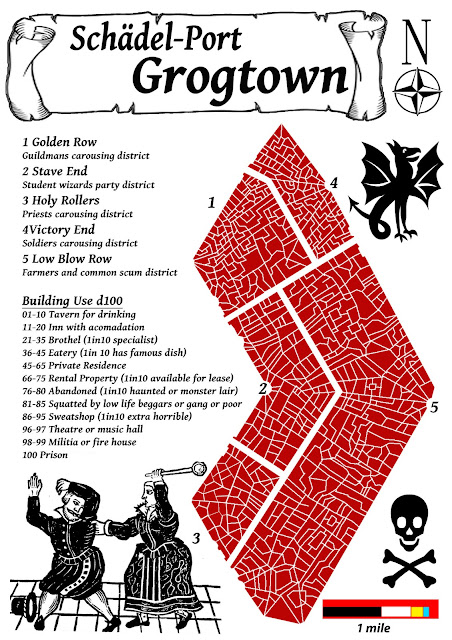 Ok here is first of my city areas detailed. Detailed lots on bus to work today where a 5 year old child punched me in the eye by accident.

I did this first as probably best starting base for characters and where carousing rolls will be applied between levels. Has microcosms of adjacent suburbs districts.

Every block here has several unmarked lanes for night soil and commercial entry for business.

Grogtown is the central vice district and one of the easiest to enter in the city if you have money. Sailors have own in maritime district and dont like to mix with city scum.

Golden row is for guildsmen and most venues will not admit a non guilder without being guest of a member. Every trade has its own favorite haunts. Militia tend to beat non guilders first if any trouble and may search anyone else not fitting in area. The area smells of good food and grog and is cleaned more than other adjacent areas so isnt as nasty. The standards here are mostly 3 and 4 star but gongfarmers and ratters guild choice only rates a one. Criminals predate this strip the least. Best musicians and performers are here too. Prostitutes here are some of finest in city, some are popular and influential. Mistreating them can get you killed. They even have their own guild and resist gang and pimp control. Streets are named after merchant families, companies, banks, various trade goods and coins (Copper Lane, Darntegent Street, Fugger Road, Wheel Road)

Stave end (where wizards get their staff ends busy). This is where magic students come to blow their cash and release excess wizardly stress. Many hate the area and the militia tend to be suspicious of any who give students any trouble. Common thieves would be desperate to prey on students. Roumors of polymorphed thieves being used to make cow pies abound. Strange exotic smells and sights abound here with one of the higher sightings of various shapeshifters. Rowdy students like to play pranks with cantrips and let off a few spells. The brothels here specialize in exotic fantasy dressing as supernatural and inhuman beings (double check that is a costume lads). Illegal student fights and monster fights also go on and attract rich outsiders. Many sex workers are failed magic students and some know a few cantrips unique to area like wizards droop and its opposite wizards rod, contraception, kill lice, conceal sores. Most venues 2 to 3 stars. Real adult wizards wouldnt be seen dead here. Occasionally a scandal of a demon or monster or undead in disguise has been operating here and eating apprentices. Streets are named after spells, stars, constellations, magic beasts and wizards of old (Dragon Lane, Prismatic Road, Polestar Street).

Holly Rollers is where the more amorous and worldly priests come for a good time. Many wine merchants here supply the holy district and many shrines are to be found in taverns and even back alleys. The area is clean and smells of incense and a little bit of vomit and old wine. While some fun priests visit often, other clergy come here to convert and save the fallen. Some corrupt priests are very depraved and the area has the highest amount of young and same sex prostitutes. Many prostitutes here specialize in looking clean and innocent for the holy patrons. Asking questions about this stuff is a good way to get killed. Business owners and gangs preserve the status quo and militia have been known to skin men alive in the street at a priests request. Venues here are three to four stars. Streets are named after gods, spirits and heroes (Ghost Lane, Styx Road, Marduk Street).

Victory end is for warriors and anyone soft looking or a bit dandy can expect a beating. The militia will warn such persons to leave or lock them up for trouble making and inciting violence. The stench is awful: piss, old booze, septic wounds and desperation. Diferent venues aim at different tribes, units, races, ranks, fighting schools and military occupations. Most venues 1 or 2 stars with some three stars. Fights break out a lot and participants are locked up or put in stocks to cool off. A few bars on the edges specialize in recruiting soldiers, troops, guards and other fighting men. Many schools of martial arts and fighting styles are based here. Prostitutes here often injured (1in3 minor, one in 6 serious). Many are slaves and brought straight here from capture by soldiers as booty. The sex workers here are the toughest in town and often fight back. Streets here named after martial subjects like weapons, military terms, armour, butchery and fighting terms (Slitgizzard Lane, Defenestration Street, Bloodgeyser Road).

Low Blow Row was named for a street and came to be name of the biggest area of Grogtown. It smells like an open sewer with a hint of festering meat and vermin.  Farmers come here but stick to their own bars and dont interact with locals and never alone. The farmers are treated favourably by militia and receive the least beatings. Scum labour and servents from other parts of city with cash come here for the mostly 1 and 2 star venues. Scandalous ingrediants have been noted so avoid the suckling cave pig (aka: giant rat). Prostitution thrives and is a common way for persons to escape family cruelty for a fresh hell. Gangs are rife here but mostly prey on poor and wretched. Whole taverns and brothels may be gang fronts. Respectable looking types are advised by militia to leave. Riots and fires and plagues have all had their way with this part of town. While the patrons are poor, they are still better off than Scum Cove or Mutant town. The most and cheapest street and alley way prostitutes of any district. Some say the ugliest, oldest, most toothless, drunk and amputated. Streets here have horrible and depressing names or else common folk tools and farming terms (Carrot Lane, Horse Shoe Street, Sad Cripple Road).
Posted by Konsumterra at Friday, May 31, 2013