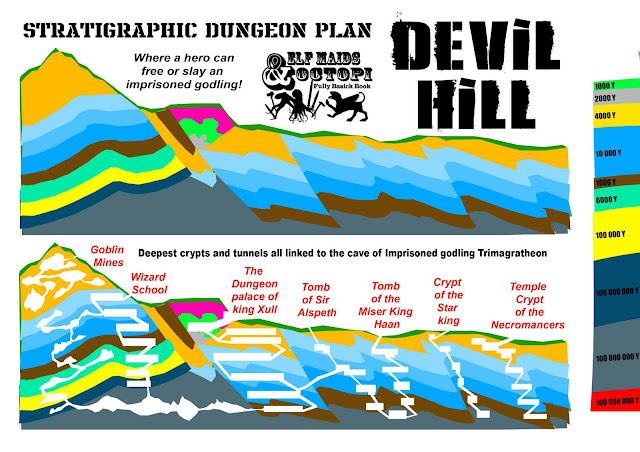 Slightly more bonkers layering and geology going on here - the pink layer is only a layer of flood silt a hundred hears ago. The green is less than 50 years.

Devil hill is a isolated black hill on the frontier of civilization famed for having multiple connected dungeons. Everyone has heard of the bound god beneath devil mountain. Has he repented or changed alignment? Will he grant a wish if freed? Or will glory of killing him make heroes stuff of legend.

Goblin mines are an old tin mine overrun by kobolds and now goblins and the whole goblin ecology like hobgoblins, bugbears, riding bats and wolves and worse.

Wizard school is a dungeon with advanced classes being taught at lower levels. It also has a adjacent cave complex were secret rituals, student gangs and reject experiments roam.

King Xull's Dungeon Palace is the pleasure palace and shelter for a doom averted by an ancient heretic warlord. Xull broke the rules of war and magic and crippled the bound god in battle.

Sir Alspeth was a crusader when the faiths of the land declared a crusade on Devil Hill. He was killed fighting an anti paladin over the tomb of the bound god. His grave is haunted but his paladin arms and armour are buried here. His fallen comrades defend his grave even in death.

Misers Tomb was built by the nomad king Haan. He made slave wizards of many lands build this horrendous trap for robbers then had them killed to guard him in death as mummies. He took the wealth of a generation with him.

The star king fell from the sky in ancient times and raised the locals to a high level of civilization that didn't outlast him by 75 years. They did build a grave for the space god, who could be resurrected and a force for order. Strange space relics and creatures inhabit the tomb.

Temple Crypt of the necromancers is a remnant of the fall of the elder age when the monster races were thrown off and then a thousand years of necromancer dynasties ruled a grat desert. Cultists have expanded and maintained this site that dates back to the age when the bottom layer was formed.

Trimegratheon the bound God is in the bottom cavern guarded by fantastic beasts sent by the gods and an order of monks. The great cavern temple the god can be communed with but none have got close enough or freed the god yet. Cults and adventurers fight over the gods fate yet none have succeeded. Some fight for the gods promises of wishes, other hope to kill him for glory, or use his power to fight some cause. His real temperament or current one is unknown but he was struck down by the common gods, yet not destroyed.
Posted by Konsumterra at Saturday, May 04, 2013