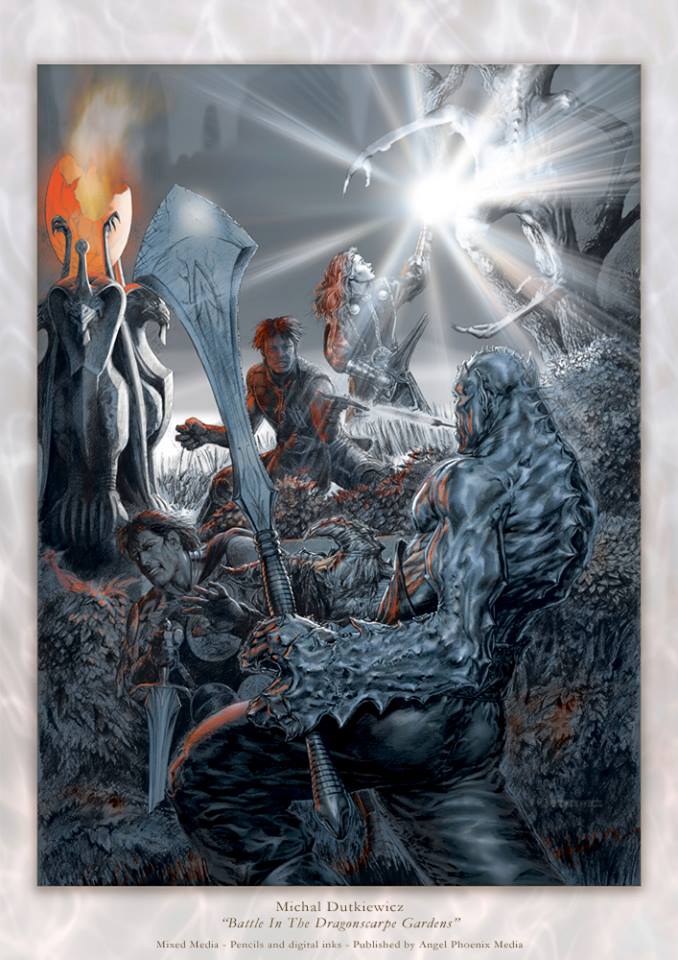 Part 1 (Matt and Carolina absent here) Escape from Kraken Cove
The Party met their new bard and were advised as to the thee targets. The kobold warren in the mountain (how bad is it? mission). Discover the extent of the Serpent god cult in the swamp village. Deliver the empire banner to the lost Barrony. So they chose the last one taking the deadliest route, past the coastal village of Kraken cove. On the way between the two evil wood zones, they were stalked by a warg rider and Humble zorg drove him off with a magic missile (party not useless hoboes after all). Kobolds in the grasslands attacked and were hastily killed, Humblezorg took an arrow. Cuddles killed several kobolds horribly.

Shortly after came across the enterance to the safe road into the evil dark elf forest. Looked pretty spooky and Humblezorg could sense evil forest animals in area. When the entered the worst storm ever broke out, slamming them with water and wind and darkness. Instead of continuing to the Barony of course they went to Kraken cove, a place avoided in 9 months of games on the Island. Got into pub to be stared at by locals but party charisma and bardic displays worked well. They bought an urchin off the barman and Hunmblezorg won a magic ear ring in a dart contest (?).

So in their room they went to move bed against the door to find a trapdoor under bed. Humblezorg sealed it with a glue cantrip. They heard something shuffle under th e floor and Humblezorg sensed evil. The thing couldn't get in and shrugged off. Outside they heard noises, next thing they were all blasted by a sleep spell.

Awaken in a cage in a huge dark sea cave. Could see possessions on a table and hear chanting one way, the sea another and stairs up another. Escaped with acid cantrips on bars. Grabbed back stuff then, checked out barrels and chests. Lynden was good at spotting traps and Garry was good at hacking them. They found cult robes and medals and left the barrel with something in it Blidl the urchin thought someone could be inside so party opened it to be attacked by a Flumph! All were fouled and Garry and Bambi fled in different directions in nauseated terror. Humblezorg zapped it and was spattered with its tentacle acid. Cuddles ran about barking uselessly. The flumph was chased off and the party restrained its yellow comrades till better. All covered in flumph slime.

Went upstairs and cultists began to chase them. On the surface they busted open a door and found a narrow 2 foot wide wet crumbling path in a storm. They chose the right one of two directions and wer back at the village. They kept running till Garry and Bambi were so ill they Couldn't continue and found a cave to shelter in. Settled in to find ostrich sized eggs in a nest. Took them and fled to barronny who let them in with the Banner into the gate house. Met various personalities of the town and heard of the cursed baron and his supposed heir, a sorceress. Lynden got a date with her. Met pawnshop broker, various guards and Pug the Sorcerer from last campaign still where his friends left him. He filled them in on the Barrons curse and the Dungeon which the White lady had said was unimportant and empty.

Part 2 (Matt) I shot the Sheriff but i did not eat his deputies
Forest went to Marsh village and checked out how things were since party burned down temple. He started a plan to kill the Innkeeper and the Sherrif on the list of cult leaders. He got a goblin henchman and went to the big city, also where players warned about, but a drunk master monk was fine. Got a feel for city, disguises, goblin squad, a kobold in a bag and used a disguise and forged letter to get seige ingineer to design a trap. Back to march village area where he found good ambush poin and built a trapdoor designed so when he jumped in the gully was swamped with rollong boulders. Took a day labour with his flunkies then back to village to con sherrif into ambush. While the posse was going to the ambush, Forest gave men a shot of courage, the best grog they ever had then made 5 bluff rolls to make them drink more shots to get them sloppy fast. The sherrif was unhappy and abstained. So the trap was by forret hitting with his sticks then into the pt. The trapdoor shut and released boulders which crushed most of  the militia. The goblins hurled javelins and Forst got to leap out and KO the sheriff. The goblins got the arms and armour and offered to eat the evidence. While they feasted on serpent cultists Forest awoke the Sherrif and warned him of the possibilities. Terrified the man cried for mercy and blabbed, earning the right to a quick death and cremation rather than goblin food. Then back to Marsh village in disguise as foreign merchant who got tavern keeper into a drinking contest.Carried the drunk barman back to goblins for repeat of earlier.

Basically reptilians have been kidnapping locals and charming them with the presence of the "snake goddess". All tunnels under village connect to serpent man temple. Leader villagers hopelessly corrupted but village could be saved. Good thing Forrest found out before horribly killing everyone. He has a taste of city that will benefit party too. Was saddened that goat missed out on a fight.

Then went back to party house in green wood vale. Grizzliest interrogation scene ive seen in game in years.

Have 3 groups to place in a dungeon entrance somehow next week.
Should easily knock off dungeon remains and save barony.

A Sydney game meet up on Saturday and dinner. Possible Sunday games but i have a mural to do too....

Will let weather decide, could paint sat morning...
Posted by Konsumterra at Tuesday, May 28, 2013