Into the Sargassum part one 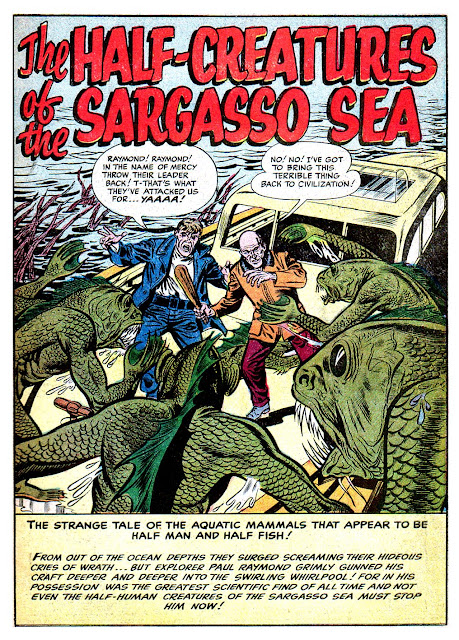 This is a vast sea choked with kelp like might forests beneath the sea and home to fabulous creatures. Strange weather, hauntings and sea phenomena keep visitors away before most get close enough to be eaten by monsters. As you enter you get drawn into another reality of stranded ships and monsters. Among the ancient wrecks humans survive and form savage societies. If youcame by boat someone wants it. Made of meat? Someone wants to eat you.

Ive done a bunch of sea themed stuff over years intending to do a comp. My Bloodsand Beach setting was so horrible ten years of players never visited and several times debated it when sighted then left. Lots of stuff on horrible encounters and my sea invade the land stuff all worth look and most are filed in a group in my sidebar links on my setting.

Part of the plan early on was to feature human seaside settlement, some stuff on ships and world maps and island generators. The dungeon part was a ruined city buried in a coral reef from an ancient civilisation with lots of fish folk hybrid sand worship of undersea demons. The top levels would have air, the lower ones dark and flooded and more horrible.

But the idea of Sargasso that meant Unclescrooge of Johnny Quest might visit and it literally had giant weed, hundreds of visible wrecks, mist and monsters. Of course dinosaurs, pirates, undead, cannibals and cults abound.

So like many of the settings I make, these are the core tables to do

Long Term To Do

Gigantic seaweed structures often rise above water level and as thick as mighty tree trunks. Often these growths lift old wrecks up even several stories above the water. Many you can walk on through the maze of the sargassum. The branches vary from a foot wide to two to six yards wide and sometimes bigger. People build structures in upper branches as homes.

The weed has many uses even as food and medicine. Many creatures live among it and on it like shellfish and crabs. Supernatural sea creatures from the marine faerie world thrive too, some petty spirits and divine beings living as local gods with thralls.

Tides and fog are common factors too. Certain levels or shipwrecks might be partly flooded with water levels changing with tides. Swimming skills will be very useful.

Ive done my sci version too

d12 What's in the centre1 Volcano covered in vents with a colony of immortal tube worm wizards dreaming of the past
2 A great sea shell citadel of sea elves with a few left inside dying of boredom
3 A sea giant or cyclops tribe live on an island ruled by a king or queen
4 A garden where the sargassum spirit can be communed with
5 Fortress of a powerful seahag, a local divinity with monster minions
6 Black basalt fortress ruled by beast headed lich immortal
7 A great castle of sand on an island defended by crab folk and sea creatures
8 A great whirlpool to the underworld oceans
9 The great fish folk fortress of sea vegetation and coral10 Sea god has erected a throne and court attendants here
11 A lush volcanic island paradise where earth and volcano divinities once mated
12 Ancient elder sea demon god has arisen with the ruined cyclopean city of the deep