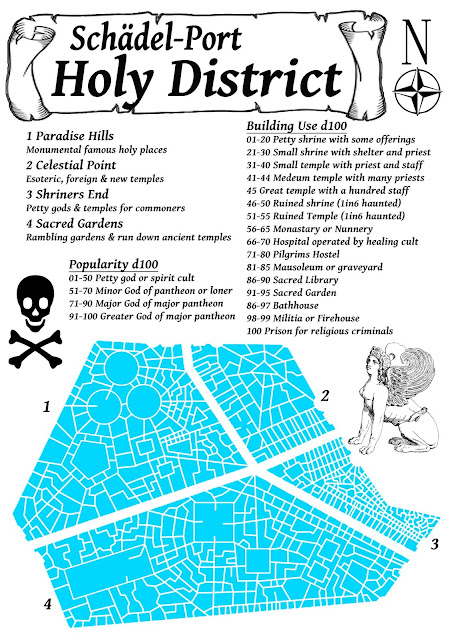 Bells, chanting, rattles, drums all kinds of music can be heard and smells of incense and wine fill the streets. Paradise Hills smells sweet and fragrant and great choirs and orchestras can sometimes be heard. Celestial point smells more spicy and narcotic with chanting and insane gibbering of cults. Shriner's End smells of poverty, livestock and cheap and faded incense and sounds like a marketplace. Sacred Gardens smells of flowers and vegetation with a hint of exotic spice and fruits. Garden is the quietest area with sounds of the chattering of birds and monkeys broken occasionally by chants or screams

1 Paradise Hills
Monumental famous holy places
Richest, most popular, holiest and greatest temples are here that interact most often with the government and receive to most donations. Several sprawling cathedral complexes are here rivalling any in the world. Templars patrol the street and guide pilgrims and keep order. Various churches provide clerics for this but several specialise

2 Celestial Point
Esoteric, foreign & new temples
These are the more new and esoteric religions from foreign lands that are successful but not established or supported by the state. Many are cults and some are more philosophical even sorcerer personality cults. Some streets have blocks for rows of proselytisers where common folk can choose a religion. Vigils are initiated performing labours to church, amateur but zealous

3 Shriner's End
Petty gods & temples for commoners
Were shrines and temples of commoners are found in the thousands, Streets of idols in walls and even alleyways have shrines. Poorer peoples welcome here otherwise require official pilgrims permit to visit nicer areas. Petty gods often visit here but meeting them is mostly trouble. Priests here are more down to earth and practical with charity. Many stalls sell relics and souvenirs. City militia act as law here and treat everybody poorly and are unimpressed by unpopular cults

4 Sacred Gardens
Rambling gardens & run down ancient temples
This area is full of parks and gardens, temples here are older and some prehuman ruins. Many abandoned and overgrown buildings where scorpions, monkeys and snakes scurry about. Crumbling ziggurats, worn pyramids and vast mausoleums are here. Some are painted. Temples here are quieter and less popular, many old religions here have been forgotten in other places. Druidic priests and other older religions manage a presence here. Nonhumans operate many holy places here. The quieter streets here have attracted cult kidnappings and local temples tend to secure their own immediate streets with city militia sweeping streets by night looking out for monsters, murder cults or squatters
Posted by Konsumterra at Thursday, April 16, 2020