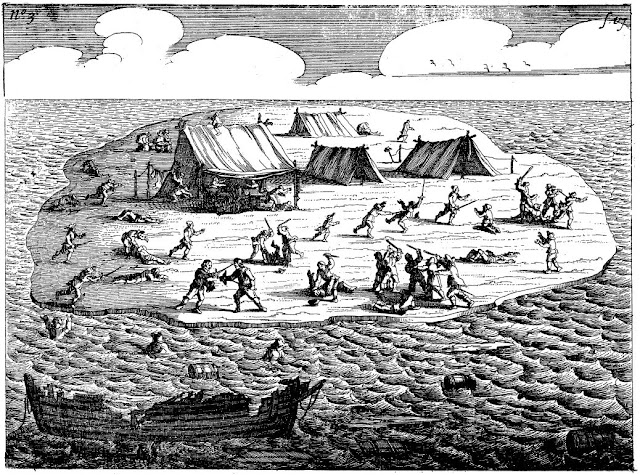 Slow going this month with posts but I've been busy with adult stuff.
Here is a link to Tenkar's Landing aka the Black Isle, I apparently wrote almost a quarter of. Doh of course I tend to cringe at my own mistakes and why i stopped working with OSR collab stuff but this is pretty amazing and was a few years in the making before my banhammer. Self loathing aside Im enjoying it.

I chose a empty sea hex added some mountains and a huge underdark with citadel generators, orc tribe generators, ogre mutations, crystal caves which might be handy for a veinscrawl also.

Links on Tenkars page and he deserves the hits for presenting this - several years in the making http://www.tenkarstavern.com/2018/07/the-tavern-chat-podcast-episode-65.html

Coincedently I have been doing this:

People to find on islands at sea
I make most alone but 1in6 will have 3d6 persons
d20 years a good amount time stranded (longer if crazy)
Most names here are Spanish, Dutch, french and a few Chinease
This could be used in a historic setting