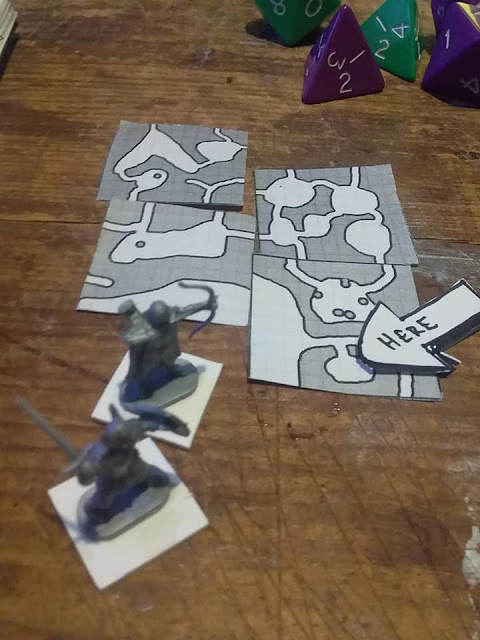 So I have been playtesting my rules solo style and made a small party of four then play them through the combats of my first ten 3fold adventures in the Threefold land. Was pretty informative and found some errors and rules to fix and got me on some other tangents.

I rolled stats and used the by the book character skills and spells as in my elfmaids book to try them out.

Filthy Pete a mercenary Warrior possibly interested in social mobility
-Mulligan the bandit a follower
Manny the wood Elf likes bows and druidry and interested in humans
-Harry the hunter a follower
Nebor the Wizard a straight conservative career Wizard
-and his big black pussy MrNeedles
Portia the rogue interested in loot and doing what she wants
Liv the Druid, kind and likes to help animals
-has a pet dog Borko 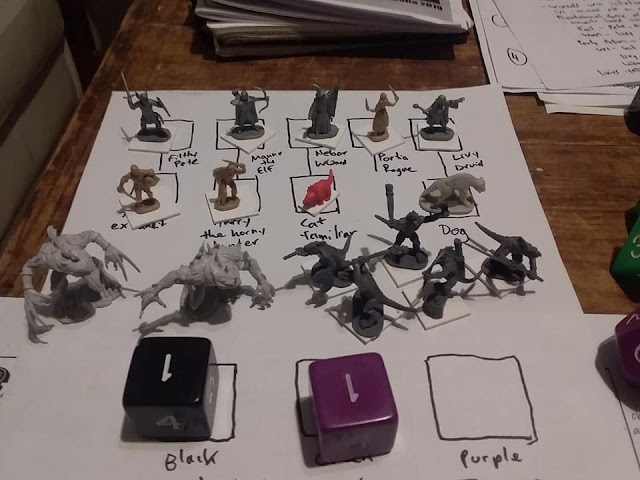 So I had done this as a solo with some characters before usually a snakey character like a gnome good at escaping I did once. Anyway, a party kind of proved the whole teamwork thing and was a lot safer. Did some basic dungeon with tables which came to a and party had a small change to go to the pub and eat out a few days. Ran through "The Secret of Granny's Hole" and just made it and then had try Nothrthmoor hall and kill everything on surface but fled the orc hero boss on a dire wolf. Failed against the beast of Velborton but solved it's secret and got diseased looking in it's loot pile. After a level-up went back to Northmoor hall and finished it off then caught a monster fo an alchemist then beat up the frog cult and destroyed the regions vice trade. Having gone a few levels up were now living as well off with own house. Poor and low lives hated them over shutting down frog grog and swamp weed sales. Finally, they beat up some witches and then robbed some griffons and got cursed. Then it was level 5 and ready to leave areas mostly sucked out of adventure possibly to Sour Hill.

So progression was good and realised how much of adventures about setting up social interaction prospects which take up in my games about the half play. Some good desperate 15 round long-running fights.

As elf and druid got into goodberries and bringing a batch from yesterday. Which had amusing results. Unlike healing, in a fight, you can't just slap bro on the back bam 8HP. Berries need to handed to hand and eaten. So some time-wasting moment as healers handed out berries wasting more rounds than healing. I'm tempted to replace other druid healing like this. The best moment was it is hard feeding unconscious people potions and berries. So I require a first aid roll to feed an unconscious person. So after it was tried on the fighter, roll failed and fighter spewed up healing berries. I had to wonder if another character would eat those chewed spew berries. Sorry, I'm Australian.

Were some amusing bits. One scenario had several hell cats with party and several members thought alignment shift for a 7HD magic hellcat seemed like a great deal and the cat was gonna help them control the Hellgate and make money it was gonna be awesome. So I had thee npc priest roll to proselytise at them and explain why devil deals were not great. So I was happy to roll persuasion and have dummies fail their rolls and believe the last account of religion they had heard. Souls saved I went and worked out their alignment oaths and they kind of exaggerated their personas well.

Glad I could generate random situations and even internal party conflicts. And will try again with some other classes to test out the default versions.

Playing with my summoning spells and time frames a bit too found the Ad&d spell had a d4 rounds for the monster to arrive and I was thinking d6 so close.

All up was big fun. Big thanks to Chad who is always encouraging me to do stuff like this or at least inspires my by his examples. 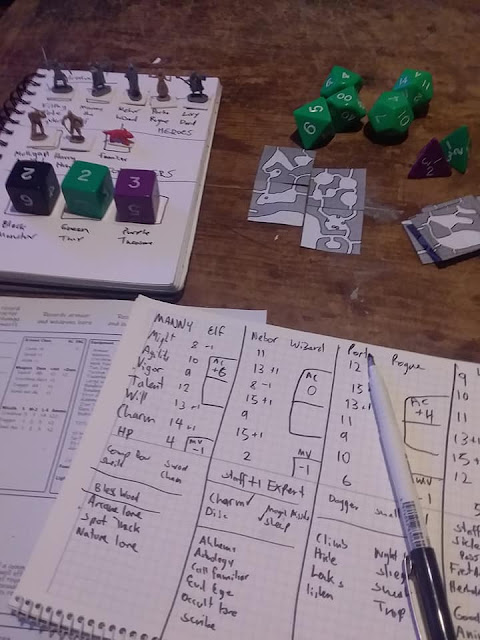