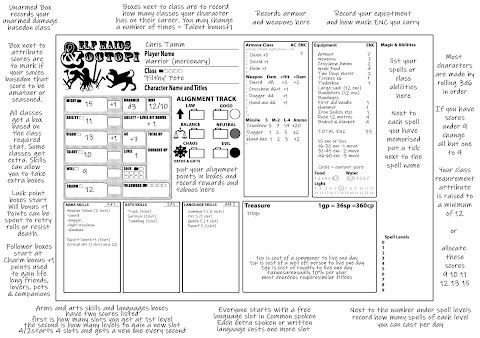 A few projects on the go...Seem to be dabbling with the finishing of my worlds of hell for my setting
-seven hells and then six in between worlds you can do your best to never enter
-when I write these up will be possible to play with very little dming hopefully and different each playthrough
Plus thinking of revising my own pantheon I have lazily used mythology for years
-possibly graphic depictions of the pantheon
Dabbling with Elfmaids monster book again

Revising my homebrew system
-added to my character sheet boxes to record class changes an option I want more of in my system and boxes by stats you can fill if you have any enhanced save based on your class/race or any skills you choose. I could envisage a graphic for senses too, eye box if you have a spot skill ear for listen tongue. Possibly next revision
-did a sheet with notes on the character sheet above. I need to proof this better and reread a few times and have page numbers to the final book sections
-few layout bugs and typos I'm finding
-have done generic "builds" of character in my system based on old classic classes and need to rename some
-monster forms might help too for groups of mooks and boss or legendary monsters need a sheet with rooms for skills and powers
-if I did more detailed builds or kits I might include something on how you got the equipment
-party form with marching order and initiative offer marked and flunkies and a company name good for NPC parties too

Hope to have a bunch of "builds" planned out so you can make a npc of a class and level and use charts to know all of the character's skills and abilities.  Fast for NPCs or late players or making a pregen for higher-level adventure. It is very list based and might finalise my ruleset first before too much of this. Possibly some generic monster add ons for monster bosses or elites too. I like in Temple of Elemental Evil PC game the ninja bugbears used a trip attack then all dogpiled the fallen victim. Useful forme anyhow. These kits are examples of starting equipment (and weight) skill and spell selections for a fast-starting character. By plotting out to what they get level by level say 20th level should make it fast. I'd like to do 5-12 of these for each class. I don't want to overcommit just cos I like things in fours or by dozen. I have 16 core classes so 12 sample builds of each maxed out might be painful. I might do this with some players. Possibly priests might vary the most if I include power alternates to turning and bonus spells.

A system of generating magic items for NPCs of high levels or new PCs might help. I used fiend Folio for these lots as a kid.

Anyway here are some alt builds based on classes
-each class in my book has a sample build of spells and skills and starting equipment which is 1 on these lists
-my naming schemata I'm still playing with and while id like to do a witch or alchemist class ill save that for some future edition as I still have plenty to do on this incarnation of the game I wrote in bed from memory when sick 12 years or so ago and got back to and ish stuff.
-priests I'm split between having to base on cults or as jobs....
-priests id like to have alternate turning powers or some extra spells or something like i had earlier versions but priest by job approach seems not as useful and perhaps all priests engaged with the struggle of life and unlife and everyone hopes to be buried on the hallowed ground or at least get a cantrip cast on their grave lest they arise which has tempting possibilities....possibly the gods & alt powers could be a later thing to do (even though I'm thinking cosmology again). I like the idea of being a healer of the bright healing gods vs a healer of darkness or a bright templar vs a templar of a love goddess too. This many alt powers might be too hard for now too so will go with what I have now and all clerics involved in war between living and dead

NonhumansI put a troll breed on quite a few of these lists to show how the races can be reskinned.
You could make a bunch of faerie folk like this too.
Abhumans used to be just beast-men but I expanded it to a variety of other humanoid beefcakes

Giant (any of these would eat a human, just saying)

+ new classes in psychon book
Cyborg - living human using robot spell list but might be better as sub type of robot)
Psionicist - like the idea of this but I might just build from bard and use my psionics spell list
Mutant (Psychon Mutant, others like necromutants, techno mutants, or mutants)
Robot (Service Robot, cyborg, farm robot,

But I better finish my draft before I get committed to doing these...
while the project is handy its sort of thing rendered useless by say a later edition

Im gonna put up some spreads on my FB group for a final going over and discussion too
I mostly don't constantly discuss anarchism on the Elfmaids & Octopi group on FB
Posted by Konsumterra at Wednesday, April 29, 2020