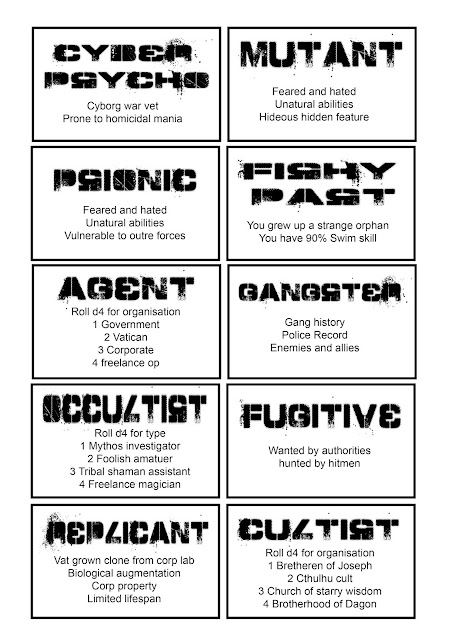 If  I used these next time will let players pick one or draw two blind.

If I made up new ones I would consider:

Cultist
Raised by sect on cult compound. Learned many strange anti social skills and falsehoods. They want you back

Corporate Class
You cane from the top echelon of society who live in arcologies and gated districts of the corporations. You are included in the corporate class if you dress the part

Zero
You have had your past and identity erased up until a few years ago. You think you have something to hide from or must new some secret. You might know some unusual skills.

Feral
You grew up a feral kid and can live off garbage, know the drains, best dumpsters and teen gangs. You try to forget it.

Vampire Slave
You have been held under the conrol of an undead draining your life as if you were cattle. Your enslaver is dead (you think) and you are free for the moment. You also server them running errands and fighting enemies and finding more slaves. You still have your tatoos and know the underground and gothics

Celebrity
For better or for worse you are notorious, easily recognized and stalked by freelance media moops. You must have done something once d4 1=public legal spectacle 2=Former performer probably TV, 3=formerly unwitting reality show start 5=you did something heroic like win a major deathrace or killed a president

Failed Astronaut
Selected and partially trained in exotic tech and pilot skills by military, corporate or church space program. Like most for some reason you bummed out or were found to be defective

Clone
Your original was killed and you were decanted from the vat. Too many brain recordings and deaths have left your memories incomplete and alienating. You have gone your own way

Darklands
You can get this game on GOG with oher olline content you have everything for a awesome 1490s chulhu witch hunting fantasy campagn waiting to happen - i ran a year game from this book and map - Sandy Peteresn and BRP based rules and Satan! What more could you want!
http://lucasabandonware.free.fr/manuels/Darklands.pdf
Los of great fan content for this to pad out campagn
alchemy is great for historic games
Posted by Konsumterra at Tuesday, June 28, 2016