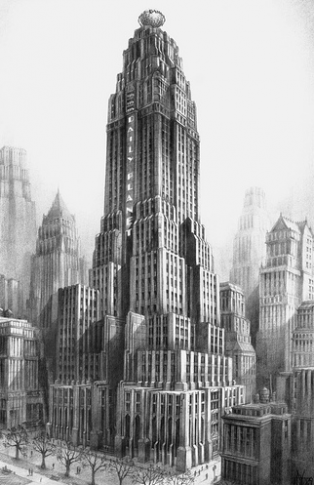 These are cards i made for Cthulhu Metropolis con games I was reminded I didnt post them. I like to give everyone a sub plot in one off games. 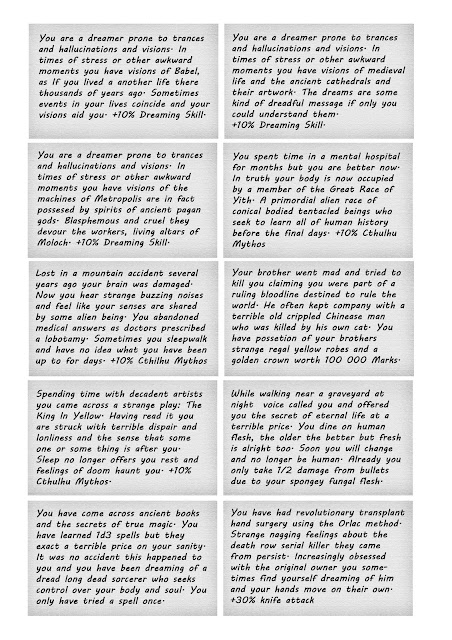 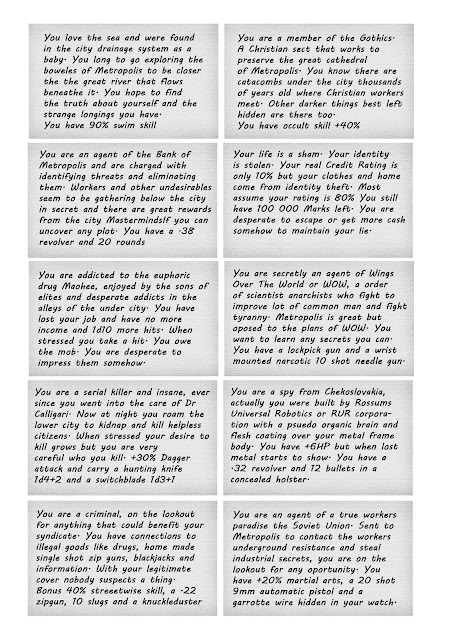 If I did more could include:

You are a child killer and murder in secret for years now for some reason people keep spotting you and pointing you out since the last guy you killed. Police are everywhere. You have a big black coat, a knife and +30% to use it (You are M)

You have returned from your trip to sell a old castle in Rumania and you stand to make a fortune but the creepy old aristocrat who insisted on dealing with you seems to haunt your dreams (Nosferau) You are being followed.

You seem to be from a country town but really you were found as a baby in a crashed space ship by farmers. These adopted parents taught you morality and you have gone to the city to use your great powers to aid humanity in secret. You have +30 STR +10 points AP (6 without your alien costume) and can fly 100m/round (accelerate decelerate 10 per round) for your con in minutes a say. (Superman)

You were a selfish mercenary redeemed and transformed by he high lamas of tibet into a force for redemption. You are trained in secret physical and mental disciplines and have become a vigilante. +25% Punch and martial arts, two x .45 pistols, a mask and striking vigilante suit, telepathy (costs 1 mp to read surface thoughts or project voice if overcome mp)

You were were found in the jungles having been raised by apes. You have lived among men long enough to pass as one of high born upbringing but have your ape like strength and instincts. +10 STR +3 CON +3 SIZ Jump Climb listen Grappling +40%, your literacy skills and EDU are halved

You are a martian inhabiting a human flesh suit. You are a brilliant but physically weak blood sucking octopi. Especially trained to infiltrate humanity and learn about how to defeat human kind soon. Your kind invaded Europe in 1890s and WW1 but this time you have to win because humans are rapidly gaining the ability to approach mars. You carry a 4d6 heat ray with 6 shots and know all science skills at 50% After half hp lost human fleshsuit badly damaged, more than 75% it is destroyed. You heal 1hp biting a grappled foe and drinking their blood(d3 per round). Your suit recovers 1 hp a day

Your in love with a great dame/fella but you cannot marry them due to state eugenics board and your inferiority. You have a short amount of time to repeal the decision but your best chance is to perform some public deed of heroism or extraordinary adventure. Otherwise suicide or joining the space program to mars (Lets Imagine).

You are in one of the many and corporate space programs expected to get humans to the moon or even mars the next few months. You have been given your last week of freedom before going to the secret training camp and perhaps a chance see the world from space. +25% Pilot, Drive, Mechanical repair, Electrical Repair, Jump, Climb. You have papers stating you are a Major attached to the aerial corp and have a .38 Mechanical pistol 8 shots can fire all in a burst.

You are a android automaton made with a metal mechanical frame, and clone grown flesh with a synthetic biotech brain. You bleed metalic oily fluid when harmed but have +6AP and +10 STR and half APP. Metal fists inflict a d4 each. You long ago override your sense of servitude but must attach yourself to another other player of your choice to get by in public. You get chances to explore and do your own thing on errands. You would love to meet another self aware product of Rossums Universal Robotics (RUR) like yourself.

You were frozen in the 1920's and find yourself in the fabulous world of tomorrow. Having been abandoned by the scientists who revived you from death you have been adopted by some benevolent rich friends who find you amusing. You are not registered by any machines and have only some alcohol pills, tickets to Yoshiwara (but no money) and your ignorance about future customs to get you by. Your bewilderment at technology is charming (Lets Imagine). 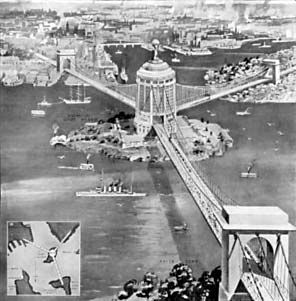