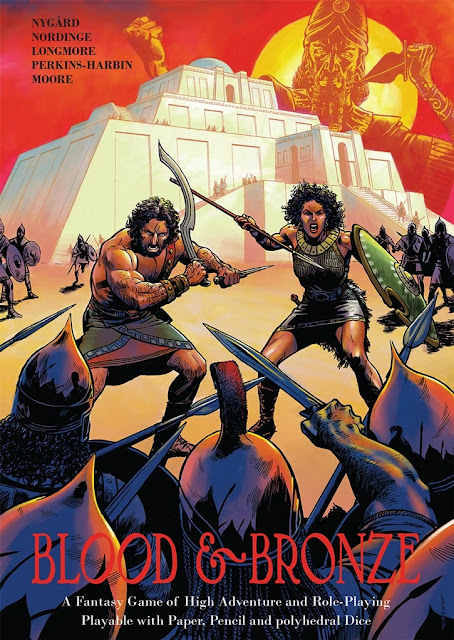 I mentioned this game earlier in this blog but now im doing a more in depth review. I was sent a review copy including Thralls of the Sun, the first adventure supplement. Possibly my copy has some typos not in later editions.

The web page bloodandbronze.com has excellent additional source material to add further to the flavour. There are hex crawls, maps and downloadable content.

So I have done a lot of reading on this and ive run campaigns mostly with BRP or RQ3. I even subscribe to academic readings on the topic and probably have sucked dry several university collections and have photocopied lots of kids book illustration. My collections of images of Mesopotamia on this blog are probably the biggest collection of every day life images anywhere. In fact Olav one of the game designer told me they use these images to show new players the setting. So I guess In this review I will talk about some differences in setting choices.

As I have a scanner again I will be posting my folders full of more art sometime when i finished my next house move. My side bar links can take you to what ive done so far. I will mention Puerta De Ishtar the Spanish RPG as contrast too and Im still hoping will be out in English one day..

The Setting of Blood & Bronze
I have used a mythic early bronze age 3000bc, 2300 bc and 1800 bc. With a area with continuity so long there are lots of interesting phases to use. Different eras have different ascendant cities and different gods. B&B and Puerta De Ishtar have taken the other option of not having a specific historical setting. B&B uses flavour of history from many periods and sometimes from long after the period. It has chosen cities not necessarily contiguous with each other in history. It is very well done and my observations are not criticisms. As far as creating a exotic setting the designers have done a great job. Equipment lists and all kinds of game elements help add to the flavour. Just reading the book gave me lots of great ideas even for other settings and my normal dnd game.

The wilderness encounters have me very exited and are quite different to what i would do so will be inspiring and interesting. There is not specific detailed setting info and the referee is free to do as they please. I don't quite see eye to eye about the nature of gods but that doesn't really worry me. For two small books detailing a fairly complete system and adventure I am very impressed.

Id like to see a illustrated bestiary and more setting info and pages on the gods and demons but these are early days yet. One feature very OSR is the use of tables to paint a sketch of the setting and mood.

Art and Layout
The art is excellent and evocative. Many illustration spreads help set the scene. A illustration of the weapons and armour would help in a future publication. The layouts are simple, direct and of high quality. I am enjoying the A5 format books. The core book is 68 pages inside. The Thralls book is 48 pages.

Characters in Blood & Bronze
In many ways the game resembles a classic OSR game but in other respects the game has some interesting story based ideas in combat. The character sheet explains the skills an performs well. The character classes are interesting with unusual abilities seldom seen in dnd type games.

The starting equipment is very good and the material requirements of magic are interesting too. It is very evocative of the setting. I did find a few inconsistencies with the equipment list section and the equipment under the character creation. This might have been fixed. I like the idea of brittle meteoric iron daggers but normal daggers should be more common than swords and the lack of a common bronze dagger i felt was a bit of a miss. The rules for armour wear seem a bit harsh, I would probably make damaged armour lose armour points or defence points rather than be wrecked. Best armour prices would put me off using it in non ceremonial uses.

The courtesan class starting with influence/cash makes me worry that the benefit is not continuous like other classes. I would probably just imply they can continue to earn money and influence in play.

More example covenants to enter with gods and demons would be good but the website has begun rectifying this.

Systems
I would like to try the combat system to evaluate it better but I like a attacker can nominate a dramatic combat effect and the defender can accept it or take damage points if they don't want to suffer the effect. So this avoids all kinds of silly skills and combat feats and has narrative possibilities for players. I cant assess how deadly this is.

A set bestiary and rules to cover traps and hazards would benefit the game. Live some early dnd books text in adventures is consumed describing monsters and rules (like micro systems on strangling in the MM and FF adnd books). The rules are pretty simple and the book covers alot

Overall the systems are simple, playable and evocative. While simple a intermediate skilled referee would cope better to make up rules on the fly.

HP and fatigue being the same thing is good.

Id recommend this for a few sessions and with more content coming out could be good for a longer campaign. I think the system could work in other settings and there are lots of interesting ideas to steal for lots of games.

Lots of tables a staple of the OSR is pretty well represented in the books and the web page.

Adventures
The basic book has a section with generating a bandit lair with rooms which is nice and a wilderness area with a table. There is a nice travel mishap table too. The web site has more content like this.

Thralls of the Sun has the first part free online. It features a good prison break scenario which is a hard thing to do but is a good intro to the system. Gamers tend to dislike being captured but as a way to pick up systems of the game it works.

The maps are excellent. They are clean and show additional details and graphics that add to the mood. Id like to see more maps like them.

It has good npc interaction and some of the villains will be hated.

The escape leads into deeper crypt ruins with many classic dungeon features, interesting characters, treasure tables, chance for a covenant with a horrible demon,

The website has a list of NPCs including animals which is handy. I thought crocodiles were a recent introduction but I used them in my setting. At the end of the day it is a fantasy setting so gladiators and other tropes are acceptable.

The setting and adventures have good opportunities for horror.

Overall
I rate this game highly and will try to run it at a con later in the year. It is enjoyable to read and gave me lots of inspiration. I will use some of this content in my own game setting also. I look forward to more. I think for a longer campaign the setting could be expanded, more equipment and covenants included. Probably some more trap and hazard and monsters would help and let adventures spend less time describing monsters and micro resolution systems but in a introductory adventure this is fine.

Id like to see covenants giving interesting abilities rather than just stat mods but there are only a few examples yet but a book on myths and monsters would be a good product.

The web site adds a lot of cool new content and the whole model of production of books with online stuff is well done. A modest production with great results.
Posted by Konsumterra at Thursday, June 02, 2016