Underland 6 - New Hazards in the Underland 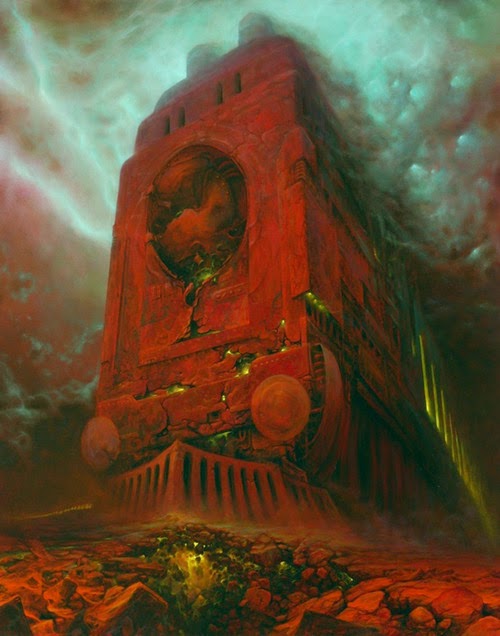 So played a bit of Underland tonight. Terrain and environment set the mood nicely. I need some more horror yet before I have them in ruins. The sample hex i did for Tenkar's Landing version is a bit small but was a good start. I might change scale in my regular setting.

The tunnel filled zone between the great Underland and the surface has many natural tunnels dug by monsters and volcanic vents and eroded by water through limestone. many have been altered and improved by animals and races of the deep. When marching you might find traces of mines, sub roads of underground cities, graffiti thousands of years old and more. Many smaller tunnels more erratic but larger ones longer, straighter and more evidence of habitation. They are the highways of Underland trade and connect many places.

So a big couple of encounter tables here for those tunnels in between the surface and the great Underland. Then some d12 tables for various terrain zones on the hex i have done so far.


I had forgotten about my old dungeon zone 12 Underland which I should print to use in current game. http://elfmaidsandoctopi.blogspot.com.au/2013/03/long-stair-dungeon-style-zones-part-12.html

Hazard and mystery tables handy too. Hazards are more problems and obstacles and mysteries are things that imply plot or make you question or could even be plot seeds. As original Hazard table was only d50 will add some extras here.

Regional Encounters of the great cavernThese are for this map

d12 Swamps and bogs
Dominated by savage frogmen and other slimy horrors, many ruins are found here

d12 Goblin Mushroom Forest
Crawling with life and plentiful food, dominated by goblinoids. The markets are a good source of interesting petty magic at low prices but buyers beware

d12 Witchland Fungus Forests
This matriarchal kingdom has many secrets they intend to keep. Rins and monoliths and barrow mounds aplenty

d12 Necromancer Lands
Necromancers have come here to hide from surface and plunder secrets of the ancient age where they ruled the earth. Many towers here inhabited and abandoned

d12 Deathlands
Are roaming with free willed undead resentful of human necromancers coming to enthrall them. Rich in tombs and graveyards

d12 Pale Plateau
A cold and stony place where ancient beasts and giants dwell in shadow of a glacier. Some giant ruins from a more civilized age are here

d12 Stone City Plateau
A great gathering place of human shamen and staone age wizards in the past when humans threw off the yoke of slavery to the pre human masters. Many barrows, monolths, caves, towers and remains of walls in crude cyclopean style, many made from magic

d12 Lost City Plateau
A huge sprawling city of degenerate remnants of the age when prehuman monsters kept the human race as slaves. Remains of many buildings and streets keep the secrets of the past

outer caverns are species specific or crawling with mythos horrors like darkspawn and shoggoths and cultists and degenerate devolved humans and lizard men
Posted by Konsumterra at Saturday, November 08, 2014